Kai Vanderlip just wanted kids to remember. And books, he thought, might be the best way.

Now a 17-year-old junior at Tesla STEM High School in Redmond, Vanderlip was in fifth grade when he first learned about the Japanese American incarceration brought about by Executive Order 9066. That order, issued 80 years ago last month by President Franklin D. Roosevelt, ultimately uprooted more than 100,000 Japanese Americans on this country’s West Coast. Labeled threats to national security, they were forced to leave their homes, and were sent to guarded prison camps for the duration of World War II.

It was a topic with which Vanderlip had a personal connection: long-ago family members — a great-grandfather’s brother and brother-in-law — who were incarcerated. And it surprised him that he hadn’t learned about this before. He spent months researching the topic for a special project at school, becoming an expert on the details. In 2017, when he was in sixth grade, he participated in a workshop led by Lori Matsukawa, then a KING 5 reporter, commemorating the 75th anniversary of the incarceration, and asked her at what age she thought kids should be learning about this.

“Even kindergartners can understand that at one point in history, it wasn’t cool to have a Japanese name.”

“She said something like, ‘Kids can learn about this at any age,’” Vanderlip said, in an interview last month from his Redmond home. “Even kindergartners can understand that at one point in history, it wasn’t cool to have a Japanese name.”

That was the seed for Vanderlip’s project, The Day of Remembrance Japanese Incarceration Literature for Libraries, planted years ago and finally harvested during the pandemic. Wanting to do something extra during those difficult early months of staying at home, Vanderlip noticed that the 80th anniversary of Executive Order 9066 was coming up. “One thing kind of led to another, and I thought it would be awesome to get picture books [about the subject] into elementary school libraries. I thought, I didn’t learn much about this in elementary school, it was all my own research. Especially in 2020, it seemed super relevant.”

Watching the news at the time was scary; hate crimes against Asian Americans were increasing. But Vanderlip wondered if maybe kids could learn early on about civil rights violations like the incarceration, “they could speak out and grow up to be more knowledgeable individuals who can speak out against intolerance of all forms.” He remembered a quote he’d once heard: “Those who cannot remember the past are doomed to repeat it.”

Vanderlip’s project began in the fall of 2020 with research on the Library of Congress website, looking for age-appropriate books for elementary schools on the subject of Japanese American incarceration. He read “a bunch of them” and curated a list, enlisting the help of Leann Clawson, the librarian at his former school, Ben Franklin Elementary. 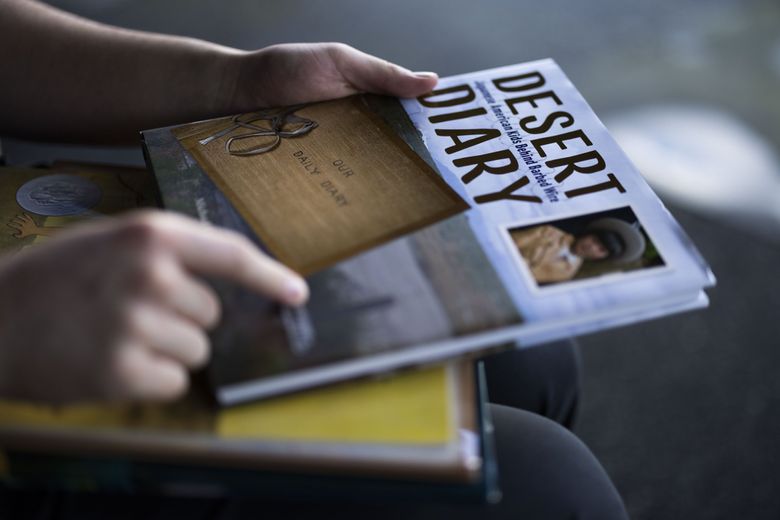 “He did a nice job of choosing books for elementary students,” Clawson said, in a telephone interview. She remembered Vanderlip from fifth grade, years ago, as “a very caring student … full of questions and eager to learn and creative. He always wanted to do his best, and thought outside the box.”

With help from Clawson, other Lake Washington School District librarians, and his school’s Equity Club, Vanderlip finalized a list of six books and began researching and writing grants; buying six books each for 33 elementary schools was no small task. Eventually funding was secured from the Lake Washington Schools Foundation and the city of Kirkland (via the Kirkland Youth Council), and Brick & Mortar Books in Redmond offered a discount on the book purchase.

It wasn’t all smooth sailing: one of the chosen books, “The Cat Who Chose to Dream” by Loriene Honda, turned out to be out of stock at the distributor. Undaunted, Vanderlip contacted the publisher, Martin Pearl Publishing, who was able to get special copies signed by the author. “He had to go through extra steps and jump through hoops,” said Clawson. “That was really impressive to me.”

In December 2021, the Equity Club at Vanderlip’s high school pitched in with a book-bagging party, to sort and package the books for the schools — 198 copies in all. Vanderlip began distributing them in January, and all were received in time for the Day of Remembrance last month, Feb. 19. He also created video lesson plans, with the help of librarians, and distributed them. It would have been nice, he thought, to visit the schools himself and read to the students, but the pandemic made that unfeasible.

“The amount of work he did … it’s a very unusual high school student that would be willing and able to pull this off,” Clawson said.

It’s a project that ultimately took him about a year and a half, and demonstrated remarkable commitment. “The amount of work he did … it’s a very unusual high school student that would be willing and able to pull this off,” Clawson said.

Cynthia Burt, associate principal of Tesla STEM High School (and adviser for the school’s Equity Club) said that Vanderlip early on struck her as an unusually caring young person. “Kai has been proactive throughout his last three years in creating a welcome environment at school,” she wrote in an email, noting that she first met Vanderlip as a new freshman who approached her “to let me know he was worried about other 9th graders who looked lonely. He and his friends had taken the initiative to include them, and he also wanted me to be aware.”

These days, Vanderlip is thinking about typical concerns for a high school junior. He’s working on a college list (he’d like to stay on the West Coast and not go too far from home) and is interested in studying English, psychology and law.

But he’s still thinking about the Literature for Libraries program, and how it might continue. “I would love to branch out to elementary schools in other districts,” he said. “Maybe more adult books, more schools in my district. I have a lot of different ideas. I’m really hoping some of these will pan out. It would be very exciting to be able to spread this project.”