This month: Seattle author Garth Stein, who collaborated with Everett’s Matthew Southworth on the new graphic novel “The Cloven,” out this week via Georgetown’s Fantagraphics Books, and also wrote “The Art of Racing in the Rain.”

related What influential locals are reading 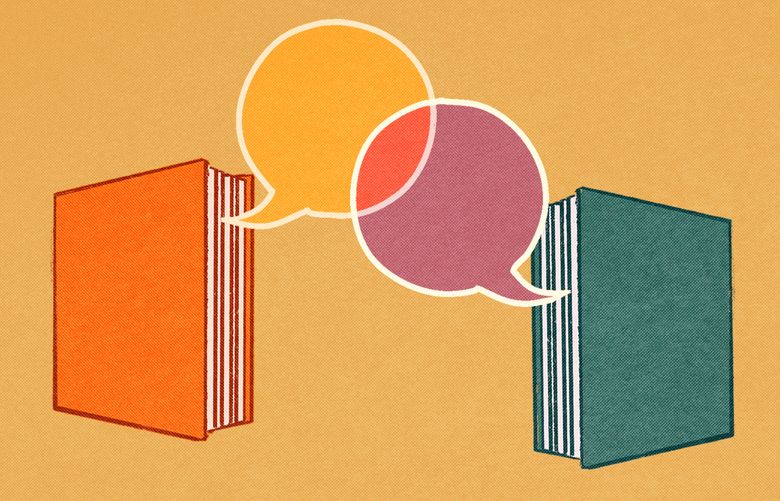 Q: What book are you reading now?

A: I have to say I read three books at a time: a fiction book, a nonfiction book and a book to blurb. I’m in the middle of “Hacking Darwin: Genetic Engineering and the Future of Humanity” by Jamie Metzl. This is definitely background for “The Cloven,” and it’s dealing really ineffectively with the ethics and morals of bioengineering. The guy is basically saying, “Yeah, well, if you believe in God or something, it’s a total problem. But since I don’t, you could do this really cool stuff with people.” So I’m reading with bemusement. But it is interesting where we are. The things that are being done in laboratories would, as my mother would say, curl your toes.

I just finished “The Mere Wife” by Maria Dahvana Headley. It’s a retelling of “Beowulf” from the point of view of Grendel ‘s mother. Grendel is the monster in “Beowulf.” And it’s really kind of cool. It’s a really fun book because it’s about, you know, monsters and stuff, and it’s always fun to read about monsters. But she’s a really good writer as well and has a cool take on “What is the monster?” They’re not monsters when she’s writing from the mother’s point of view. They just are. So it’s about the monster-izing of the other to justify one’s actions, which has some relevance today.

And I’m blurbing a book by David Laskin. He’s a local writer and he wrote a book called “The Family” years ago. He usually writes nonfiction but this new one is a novel called “What Sammy Knew.” It’s an interesting story. I haven’t even thought how to describe it. It’s a period piece from the ‘60s, looking back on an era of social strife in the United States and the rest of the world. And it’s kind of interesting to read now because there is a racial element to it. It’s pretty significant and important and, and when reading it, you say, “Wait, isn’t that what we’re doing now? So what were we doing in 1969? I thought we crossed the Rubicon there?” And, in fact, I guess we didn’t. Or it was kind of clawed back, you know? So this is interesting to read from an anthropological point of view of the cycles of social strife. What is considered progress? I think that is an important question.

Q: What book have you reread the most?

A: I think the book that I’ve read the most, believe it or not — and in some circles I may be controversial for saying so — but I’m going to go with “The Absolutely True Diary of a Part-Time Indian” by Sherman Alexie.

He’s out of favor right now, so it’s dicey for me to bring him up. [Alexie was accused of sexual harassment by multiple women in 2018.] However, I’ve read it so many times because I read it and I have three sons, and each of them has read it — either I’ve read it along with them concurrently or, depending on their age, listened to an audiobook. With my youngest son, the two of us listened together while we were driving in the car on a road trip. And I think it’s important for me. It’s cool to watch it go through my kids, you know, how they take it in, how they’re shocked at things, how they’re laughing at things, how they’re surprisingly touched and moved by the end of it. Now we have the conversation with my youngest son. I had to say, “So the question is: If you’re a person who has done things that aren’t great in your life, does that mean you’re not a good artist? Does that change how we talk about your art? Does that mean we can’t talk about your art?”

Q: What book do you recommend other people read and why?

A: I have to go to my go-to book for teaching storytelling: “One Flew Over the Cuckoo’s Nest” by Ken Kesey. I would like to go with “Sometimes a Great Notion,” but no, it’s too difficult. “Cuckoo’s Nest” is great in terms of when I want to talk to writers about how to approach a story and what the choices that he made in that book are, and sort of the simplicity of it and yet also the complexity of it at the same time. I think it’s an inspired book, I think it’s really well constructed and it’s a great teaching tool. It’s not long and it’s very engaging and, yes, it’s disturbing. But all good fiction should provoke. I believe that firmly.

Chris Talbott is a Seattle-based writer and editor.