Skip to content
By
RAF CASERT
The Associated Press

GHENT, Belgium (AP) — Look closely, and one panel of the brilliantly restored lower half of the Ghent Altarpiece still has old varnish, right next to the vivid coloring that has come to life again in one of the most iconic works of Western art.

It seems older than the rest of the early 15th Century work, but in fact the browner panel is a copy dating to the 1940s — and a reminder of one of the greatest unsolved art crimes of all time: The 1934 theft of the Just Judges panel, painted by the Flemish Primitive Jan Van Eyck, whose works grace the world’s greatest museums.

Restorers didn’t want to give the copy the same makeover as other panels that have been cleaned up so far.

“We chose to leave that patina on, precisely to show clearly to the people that this is a copy, not the real Van Eyck,” Canon Ludo Collin of Ghent’s Saint Bavo’s Cathedral said ahead of the opening of a new visitor center this weekend . 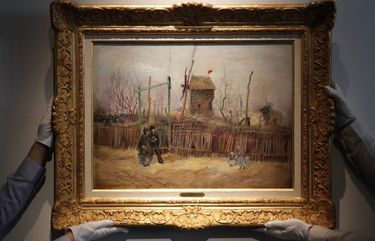 Related: In other art news

The real Just Judges could be anywhere, and Ghent still has a prosecutor and two police investigators tasked with solving the crime almost a century later. And over the years they have had the assistance — usually unsolicited — of amateur sleuths ranging from a former police commissioner to a cab driver, a computer expert and a children’s book author.

Like the painting itself with its intricate detail, glowing light and religious subtleties, the crime story is hard to resist.

Magistrate Caroline Dewitte says that just before the chief suspect, Arsene Goedertier, died of a stroke half a year after the theft, he murmured: “Only I know where the panel is.” And then there’s the mysterious claim in the last of 14 extortion letters, one never sent, in which Goedertier wrote that “The Just Judges are in a place where neither I nor anyone else can take it without attracting the public’s attention.”

Adding to the mystery, police searching Goedertier’s office found a series of so-far indecipherable drawings and strange acronyms that could possibly be linked to the theft. “It has shades of The Da Vinci Code,” Dewitte said.

In its long history, the Ghent Altarpiece was nearly destroyed by iconoclasts in the 16th century, taken to Paris by horse and carriage after the French revolution, sold off to an art dealer, almost burned in the cathedral in 1822 and bricked in during World War I to avoid German appropriation.

After the Just Judges survived all that, then came what was quickly dubbed “the intrepid theft.”

The disappearance was discovered on the morning of April 11, 1934, and soon afterward throngs flooded into the Gothic cathedral, potentially destroying key evidence that could have helped investigators.

“Just think what might have been lost in those first precious hours,” Dewitte said.

Then the first letter arrived at the Ghent bishopric, demanding 1 million francs, a vast sum at the time, for the panel’s safe return, and threatening to destroy the work if authorities didn’t cooperate. The extortionist even gave back a minor rear panel that had also disappeared that night, to prove his credentials. Twelve more such letters followed and the 14th was found, unposted.

“It’s a case that makes people fantasize,” said Paul Drossens, the state archivist who now has the original police dossier in his care. In three big files, marked in red with “Never destroy,” it contains everything from the letters, the appeal to Scotland Yard for help and the 1935 public warning that “the prosecutor’s office is convinced that (the) panel was not destroyed and needs to be tracked down in the country, and primarily in Ghent and its environs.”

Ever since the massive restoration effort on the 15-by-11-foot altarpiece started in 2012 — stripping layers of old varnish and overpainting to reveal Van Eyck’s brushwork — Dewitte said, “I was somehow hoping that it would lead to a breakthrough, because it is so sad that the original panel could not be part of it. It was not to be.”

Canon Collin still holds out some hope for what he lovingly calls “the Loch Ness Monster of our cathedral,” as it’s been suggested that the panel might have been hidden somewhere inside the massive Gothic building.

In any case, authorities now want to ensure that all the remaining panels are perfectly protected from theft and humidity. If there is any drawback to the new visitor center, it is the massive glass encasement that keeps the public just too far away for a close inspection of one of Europe’s greatest works of art.

“It is well protected against theft. But I won’t say how it works,” said Collin. “One panel is enough.”