By now, you know the drill with snubs and surprises. It’s all about the alliteration. “Snubs” aren’t really rebukes or manifestations of contempt. More like omissions. And even with a reduced number of obvious Oscar contenders in a pandemic year that confined moviegoing to our living rooms (and maybe the occasional drive-in), this year’s nominations still had their share of lapses. A few happy revelations too.

Let’s do the rundown.

Stanfield had been campaigned in the lead category for his portrayal of FBI informant William O’Neal, the man who betrayed Black Panther Party leader Fred Hampton. But actors branch voters decided to reward him — and Daniel Kaluuya, who played Hampton — in the supporting category, part of a great morning for Shaka King’s sensational biopic drama.

This shattering adaptation of August Wilson’s play earned five nominations, including the expected nods for leads Chadwick Boseman and Viola Davis. But voters seemed to hold its theatrical origins against it, omitting it from the adapted screenplay and, more surprisingly, best picture.

Sorkin is a literal screenwriting brand, but the academy’s directors branch clearly isn’t ready to give its approval to his stylized, snappy, theatrical vision of filmmaking. I could go into further detail, but I need to walk-and-talk my way to the next subject …

SURPRISE: Thomas Vinterberg, “Another Round” (director)

Vinterberg’s wild and wonderful friendship drama earned the expected international film nomination and also this shocker for its director. The movie was one of the season’s strongest word-of-mouth sensations, an exhilarating film about a middle-aged man awakening from years spent on autopilot.

Spike Lee’s action-adventure following four Black veterans returning to Vietnam to find the remains of their fallen squad leader — and maybe a fortune in hidden gold — arrived in June to great reviews and a sense of urgency in a summer of Black Lives Matter protests. But if “Da 5 Bloods” was a movie for the moment, that moment seems to have passed for Oscar voters, who largely ignored the film, Lee and Delroy Lindo’s fiery lead turn as a disaffected, immigrant-hating Trump voter. It did land an original score nomination, but not even Chadwick Boseman made it in for his brief, powerful turn as the group’s mythologized leader.

There’s never been any doubt about the quality of this devastating drama starring Anthony Hopkins as a man confronting the loss of his mind. “The Father” moved audiences to tears when it premiered at Sundance … though that was more than 14 months ago. The question was whether enough voters would commit to watching this brutally difficult film in the interim. Judging by its multiple nominations, there were plenty of people willing to give it a look. Call it “Amour” for a new generation of academy members.

Masking terror and revulsion when 76-year-old Rudy Giuliani invites you to a hotel room for a drink deserves the highest recognition.

Pundits might have been a little quick on the draw in handing Zendaya a nomination without anticipating just how much most critics would loathe Sam Levinson’s empty-headed vanity project. The dialogue surrounding the movie wound up overshadowing the young actress’ intense, committed work.

It was a wonderful morning for actor Leslie Odom Jr., who earned a supporting actor nomination for his superb portrayal of singer Sam Cooke and an original song nod for his stirring “Speak Now.” But “One Night in Miami” earned only one other nomination, for Kemp Powers’ adaptation of his own play. That was a disappointment for a movie that, after its successful Toronto Film Festival premiere, had positioned itself as an early best picture candidate. 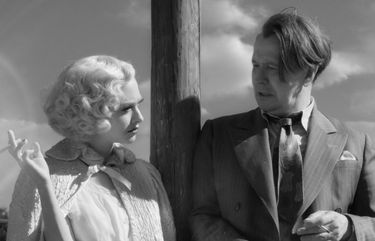