Skip to content
By
Julianna Morano
The Fresno Bee

One of the first things you notice when entering Yosemite Middle School’s Bear Cave, the campus’s social-emotional hub, are the many pairs of rainbow-colored handprints covering the walls.

Yesenia Lopez, a social-emotional paraprofessional who staffs the room, said it’s a tradition among students who use the space at this Fresno, California, school to leave their mark, literally, so future students can see how many of their peers came here before them.

But those handprints only begin to capture the mark that the Bear Cave, which takes its name from the school’s mascot, has also left on Yosemite’s students.

Lopez, like her colleagues in the space — among them the school psychologist, counseling assistants and the school’s social workers — is there not just to supervise but to lend an ear if a student needs to talk and to connect students with the right resources, depending on what issue they’re dealing with.

The Bear Cave has been around for 12 years, first opening its doors in a smaller unused classroom in 2010 before relocating to a bigger, unused shop room on campus in 2014.

Yosemite’s principal, Nichole Horn, said the school’s staff knew their students were walking onto campus with “a lot of trauma.” Whether that stemmed from issues at home, conflicts with their peers, or difficulty adjusting to middle school, many of their students needed a safe space to access to social-emotional support and to learn new coping skills. 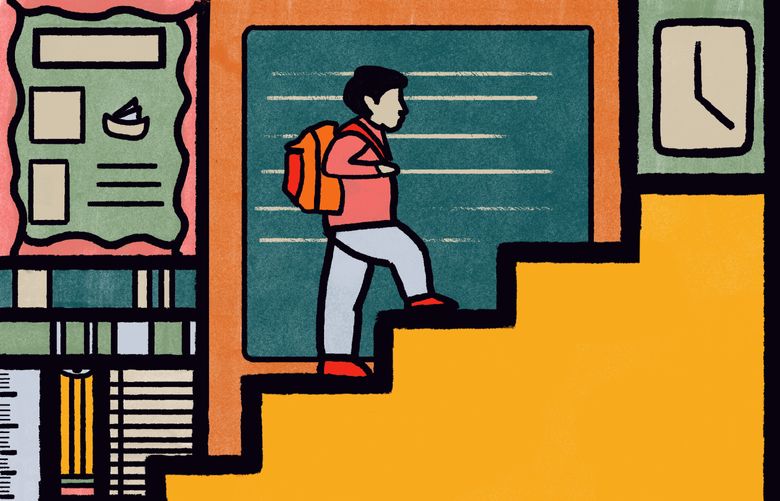 The kids are not all right.

Even before the pandemic began, more than one in three high school students in the U.S. reported persistent feelings of sadness or hopelessness. In many communities, those numbers have skyrocketed. But in some places, educators and others are experimenting with new ways to address students’ mental health needs — or reinvent old strategies.

In this reporting collaborative, the Education Labs at AL.com, The Dallas Morning News, and The Fresno Bee, The Post & Courier, and The Seattle Times partnered with The Christian Science Monitor, The Hechinger Report, and Solutions Journalism Network to produce this series of solutions-oriented stories. Read all the stories from the collaborative at st.news/edlabsolutions.

“This was kind of before the term ‘social-emotional center’ was there. We just knew we needed a space,” she said.

But more than a tricked-out fun hub — which it is, with anything from a Wii, Lego Baby Yoda, chess set and art supplies for the students to use — it’s one of the school’s most important social-emotional interventions.

The Bear Cave uses a “multitiered system of support” to identify and address various emotional, mental and social challenges students face. It offers a range of resources to help students process trauma, build healthy coping skills and resolve conflicts in ways that avoid disciplinary action like suspension that separates them from their peers.

In addition, staffers say the Bear Cave has helped make it less of a scary, stigmatized thing for students to get help from mental health professionals. District administrators identify the program as part of the Fresno Unified School District’s broader efforts to normalize getting help when students need it.

“The more we normalize kids’ feelings and teach them ways to confront these big issues that happen in their lives, the better off it’s going to be for the child, but also our community,” said Kate Alvarado, the program manager with the district’s special education department who oversees social-emotional staff.

But measuring the Bear Cave’s success in helping students is challenging in terms of data.

The school has struggled with higher suspension rates than the district and state, even after the Bear Cave opened. Staff said that those numbers don’t tell the whole story, however, and finding the right ways to measure the success of social-emotional interventions is half the battle.

How the Bear Cave works

The Bear Cave was the brainchild of Nancy Miser, the former program manager for Fresno Unified’s special education department, who retired in 2017.

Before places like the Bear Cave existed, there was more of a one-size-fits-all approach to supporting students dealing with anything from an “emotional disturbance” to a learning disability, which was to remove them from the general student population.

This response also involved isolating students in self-contained classrooms. This wasn’t the appropriate recourse for all of them, however, as many students with so-called emotional disturbances like anxiety function at grade level or above and belong in the general ed population, she said.

“One of the ideas that we had was to provide [those students] a support center,” Miser said. “So when they felt overwhelmed … and either wanted to run away or to act out or hurt themselves, they would have someplace to go and someone to talk to.”

The Bear Cave became that center at Yosemite, and it’s open to all students by design. Today, it runs as a hybrid referral-based and drop-in space. Some students get referred by their teachers or parents to the Bear Cave for one-on-one counseling with the school’s mental health support staff.

Before school and at lunchtime, however, the Bear Cave is a drop-in space open to all. Staff doesn’t take attendance, so principal Horn didn’t have exact numbers to share on how many students stop by daily. But Horn and Lopez said they now see an average of 20 to 45 students each day during lunch.

“That’s helped us to also work with several students that we might not have known [about] otherwise,” Horn said.

Staff also conduct conflict mediations in the Bear Cave — an important intervention at the school where many students have been disciplined for fights in recent years. Kong Vang, the school psychologist and a co-designer of Yosemite’s space alongside Lopez and Miser, said the students he’s worked with through the years are getting better at not resorting to physical violence in conflicts.

Even when schools worldwide shuttered during the pandemic, the Bear Cave stayed open — virtually, at least.

Lopez said she partnered with Walsh to host a room on Microsoft Teams where students could sign in during lunchtime and still have some social engagement with one another and the Bear Cave staff. Lopez and Walsh also put together activities, one example being when they asked students to make slideshows introducing themselves.

Some days they saw as many as 60 students sign in.

“We wanted them to know that, you know, we were still here,” she said. Virtual Bear Cave programming also helped Bear Cave staff get to know new students before meeting them in real life once the school district resumed in-person instruction.

Alongside the handprints covering the Bear Cave’s walls are photo collages of staff and former students who frequented the Bear Cave. Lopez said those traces of students’ older peers’ — and in some cases, their older siblings’ — time in the Bear Cave helps usher new students in, as does its drop-in nature.

That’s what helped bring eighth grader Efrain Salmeron Roneron, 14, to the space this past school year.

“I was in the cafeteria getting breakfast. Miss Lopez said my name,” he said. “I was like, ‘How do you know my name?’”

She told him she knew his brother. And that’s how he got stuck “like gum” to Lopez.

His favorite part of the Bear Cave is the talks he and Lopez have, which get personal at times, he said. They talk about life and what’s happening on campus.

“I would say the Bear Cave made me a better person. Because there could’ve been a lot of things that could’ve happened, but Miss Lopez had prevented them,” he said. “I probably wouldn’t have been at school, but she had saved me.”

Efrain also mentioned a boys group he was part of this past school year, which Lopez hosted. The small group of roughly three met regularly to talk about things like working through arguments with friends.

Lopez said this wasn’t the only small group she’d hosted. One year, she was asked to facilitate a girls group — at 7:30 a.m. on Fridays before the first bell.

Her solution? She figured out what each girl’s favorite breakfast food was and had it waiting for them every Friday. Lopez said she covered the cost of breakfast for the girls with her own money.

“Not one of them missed the morning group. That lasted for about eight months,” she said.

Despite the successes of the Bear Cave, Yosemite Middle School’s efforts to lower overall suspensions over the past decade have produced mixed results.

Yosemite’s overall rate of suspensions each school year has also gone up and down, dropping as low as 8.5% in the 2015-16 school year, one year after the current Bear Cave location opened, yet spiking as high as 17.5% in 2018-19. Yosemite’s annual enrollment ranged between roughly 600 and 750 students over the same period.

Horn, who has worked at the school for 12 years, acknowledged that the school’s disciplinary data has been unsteady. But those numbers are the product of many factors, not to mention the pandemic in the most recent years, which has taxed students’ mental health and led to an increase in students acting out in classrooms across the country.

“There isn’t just one data point that one can put a finger on,” said Alvarado, with the school district, of gauging social-emotional well-being in students. “It’s a combination of all things.”

Alvarado said that she recommends looking at other factors alongside disciplinary data, such as attendance for students who use the Bear Cave. Coming from a special education background, she also said the number of students being placed on an Individualized Educational Plan — or the number of students taken off one — are also worth considering.

Lopez said she wishes she would’ve had a space like the Bear Cave growing up — and that more students in Fresno could have one, too.

Miser oversaw the launch of some similar programs at schools across the district. But Yosemite’s has always stood out, thanks to the enthusiasm Yosemite’s administrators have shown for the program from the beginning, as well as the consistency of having the same staff in the room year after year.

Building out the Bear Cave has also been less costly than other programs. It didn’t require Yosemite to apply for competitive grants or hire additional staff. Administrators have only gotten permission to use site funds a handful of times to purchase furniture for the space, Horn said.

Through the years, a combination of parent and staff donations have filled the room with ample furniture, games and crafts. Yosemite has also partnered with local businesses like Jamba Juice and Me-n-ed’s Pizzeria for fundraisers, according to Vang.

But at the end of the day, it’s less about the space itself or the things in it, Lopez said, than it is about the students and staff who pass through its doors.

“It all comes down to relationships, and allowing the kids to know that you care. That’s what I’ve learned. Because once they know that, it changes everything,” she said.

That’s one of the other thing you’ll notice first if you visit the Bear Cave, particularly during lunchtime.

As students filed in, some rushed to the chess table or game console. But many of them also found a seat close to wherever Lopez, Walsh, Vang or other Bear Cave staff were sitting, just to talk.