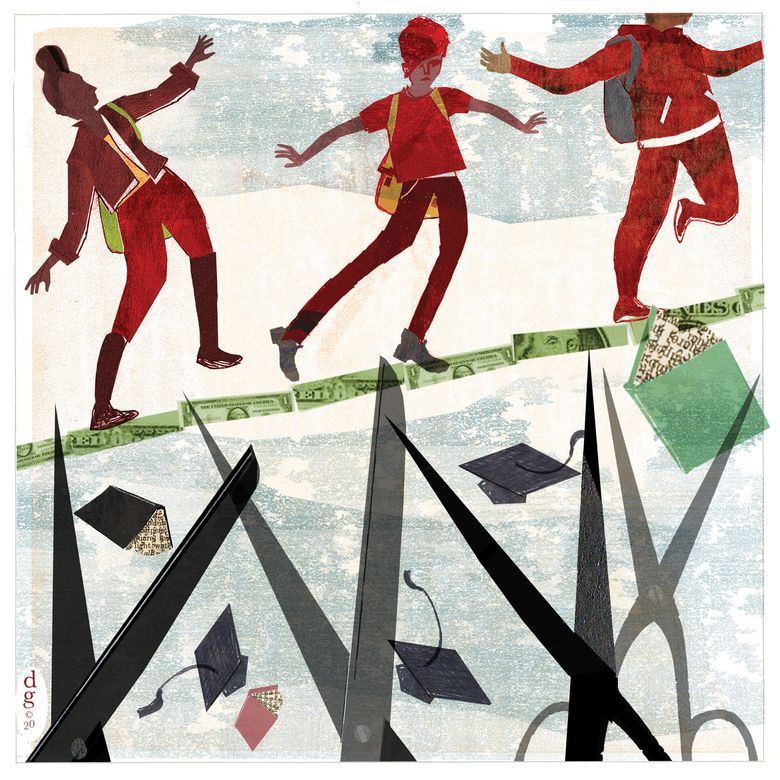 This is the first of two stories on education funding as schools consider their next steps amid fallout from the coronavirus pandemic. Coming Monday: K-12 funding will be put to the test.

Washington’s public colleges and universities are bracing for a money crisis this fall that is likely to decimate higher education budgets.

Not only will schools likely lose some students — and the tuition money that comes with them — but the state is expected to slash funding, since higher education dollars aren’t protected by the state constitution in the same way K-12 dollars are.

With the coronavirus pandemic raging this spring, universities lost hundreds of millions in residence hall rents, meal plans, parking fees and sports tickets. At community colleges, many hands-on vocational programs were canceled. And at the state’s flagship University of Washington, which runs a medical center that has been key to keeping people alive, the hospital is expected to lose a staggering $500 million through September. On Monday, it announced it would furlough 1,500 workers.

The virus lockdown has also struck at the heart of what makes college years so satisfying — the intellectual rewards of wrestling with new ideas, developing a passion for a subject, building friendships with people from other states and countries, living on one’s own. In March, most college students were forced to return home, trying to make what they could of the college experience through the blue light of a computer screen.

When — or if — they return, campus is likely to feel quite different, with big lectures taught online, dorm rooms reconfigured to keep people apart and social distancing measures that will discourage parties.

“I’m a little worried people don’t understand quite how bad this is going to be,” said Western Washington University English professor Bill Lyne, president of United Faculty of Washington State, a faculty union for four Washington public schools (Eastern, Western and Central Washington universities and The Evergreen State College). A veteran of the 2008 recession, he believes a pandemic-induced economic downturn will be particularly hard on higher education.

It’s also playing out against a long-running concern that too few Washingtonians earn degrees or credentials after high school, especially low-income, first-generation and minority students. One business-led group estimates that only about 40% of the state’s high-school grads have earned any kind of postsecondary credential by the time they are 26. It’s a problem the state is trying to mend with a generous financial aid program for low- and medium-income families.

It’s unclear just how much the pandemic is reshaping the economy, but “the vast majority of jobs gained following the Great Recession went to workers with post-high school credentials — degrees, apprenticeships, and certificates,” said Steve Mullin, president of the Washington Roundtable, a group of state business leaders. As the nation’s economy recovers and employers begin hiring again, “a post-high school credential will be essential,” he said.

And as doctors, researchers and epidemiologists work to vanquish COVID-19, the importance of advanced learning has never been clearer, said UW President Ana Mari Cauce. “Universities will be front and center at building the kinds of innovations across our industries that will lead us to recovery,” she said.

But being front and center will be much harder if budgets are slashed.

Earlier this month, state Budget Director David Schumacher asked many state agencies to show how they might cut 15% of their state budget appropriations. Exercises like this one show “how damaging things get if you’re doing it with all cuts,” he said.

If such a cut came to pass, “it will be devastating,” Cauce told the UW Regents during a meeting this month. “It will hurt students, it will lead to an absolutely diminished recovery for the entire state. We will do everything in our power for that not to happen.”

Higher education is on the chopping block because it’s considered discretionary. While Washington’s Constitution enshrines education as the state’s paramount duty, few believe that includes learning beyond 12th grade. Basic education funding for public schools is the most protected part of the budget, and “that comes at the expense of everybody else,” Schumacher said.

In the current fiscal year, the state appropriated $2.2 billion for higher education, including $377 million in student financial aid. Colleges and universities collected $1.5 billion in tuition and fees.

What the 2008 recession was like, and why this will be different

During the 2008 recession, higher education institutions were among the hardest-hit state agencies. State funding per student declined by about 35 percent in Washington between 2007 and 2012. Only five other states cut higher-education funding by a higher percentage than Washington during the recession years.

Colleges and universities laid off workers, eliminated academic programs, restricted admissions, increased class sizes, decreased the number of advisers, and froze faculty recruitments and salaries. Yet the crisis wasn’t ruinous for the system because state lawmakers also allowed four-year colleges to raise tuition. The UW increased tuition by 82% between 2008 and 2012, arguing the price was justified. Other schools hiked college costs by double-digit amounts, too.

After 2008, state lawmakers made a series of choices that included tuition rollbacks and a generous program to give low- and middle-income families more money to send their children to college. National leaders hailed those choices, but they will surely complicate efforts to stabilize higher education funding here.

In 2015, state legislators rolled back tuition by 5 to 20 percent over the 2015-17 biennium, making Washington one of the few states in the nation to cut tuition rates. At the same time, lawmakers passed a bill that capped tuition increases, tying them to the average annual growth in median hourly wages. That means that under existing laws, tuition can only be raised by about 2.5% this year.

Legislators are expected to return to the Capitol this summer for a special session to help fix the impending budget crisis, and it’s possible they could amend the law capping tuition. But leaders acknowledge it’s going to be hard to raise tuition much anyway, because so many families are dealing with dire financial problems too. “We’re in the middle of a crisis that, in terms of its effect across the population, is very, very deep,” Cauce said. “We’re not going to see double-digit tuition increases.”

Experts predict college enrollment will drop by as much as 20% at some schools, with regional public universities among the hardest hit. Students and their families are likely to demand, as some already have, a cut in the price if some or all classes are taught online.

In a policy move aimed at boosting college-going, lawmakers in 2019 approved a generous grant program that will cut the cost of college, or make it free, for about 103,000 low- and medium-income students this fall. The Washington College Grant is an entitlement, which gives it a strong level of protection for students who have received the award this year. But that doesn’t mean it can’t be cut in the future, Schumacher said.

Beyond state appropriations, there’s another problem: Universities lost millions this spring when they were forced to shutter residence halls and halt food service. Most schools pay for new dorms by selling bonds; like a mortgage on your house, the bonds have debt service payments that come from the rent the university charges. Only a few students are living in those dorms now. The UW alone projects it will lose $100 million through summer on housing and other services.

Filling those gaps is some of the most complicated work the school’s budget writers have ever done, said Sarah Hall, the UW’s vice-provost of planning and budgeting. The university hopes to plug some budget holes with CARES Act money, and the hospital may be able to recover some losses through FEMA. “We’re pulling all of these threads together,” she said.

The UW has $2.38 billion in outstanding debt from loans it has used to cover the cost of major building projects such as Husky Stadium, and pays $220 million in debt service annually, which was about 3.6% of all expenditures in the 2019 fiscal year. While the UW currently has a high bond rating, the rating agencies have put the entire higher education sector on a negative outlook. A change in the rating could increase the cost of future borrowing.

And the UW can’t tap its $3.7 billion endowment, as some have suggested, because 99% of those funds are restricted. Donors typically earmark funds for specific purposes — scholarships, medical research or to endow a chair in a department. Less than 5% of the endowment is spent in any year, and only a fraction is available for discretionary usage.

Colleges say they’re not saving money by teaching online, since about 70% of the budget goes to staff salaries, benefits and other costs of instruction. The UW has had some modest savings in supplies, but that’s been obliterated by ramped-up technology needs, Hall said. When face-to-face classes resume this fall, as most schools have said they will, germ-busting efforts will make cleaning costs soar.

During the last recession, community colleges were flooded with new students — about 30,000 across the state’s 34 community and technical colleges. Community college enrollment is countercyclical — when the economy falters and people are unemployed, many return to “skill up” for new careers.

Changes in the way we work and live accelerate during a recession, said Jan Yoshiwara, the executive director of the State Board for Community and Technical Colleges. A disease-driven economic downturn may put those changes into hyperdrive. Industries are expected to shift toward needing a higher-skilled workforce, and people who have been pushed out of a job will be clamoring for the training to master those skills, she said.

What’s more, many community college credentials and degrees can be earned quickly and don’t cost as much as a four-year bachelor’s degree. And the state’s new Washington College Grant can be used by adults who have never earned a bachelor’s degree, if they meet the income criteria.

But even while the schools brace for a tsunami of new students, they are having to manage a 15% loss in spring enrollment. Many technical classes couldn’t be taught online, Yoshiwara said, and some students decided they didn’t want virtual classes.

Like the four-years,  community colleges must identify 15% in budget cuts, although each college will make its own decisions. “We are not authorized to tell the colleges how to spend their money,” Yoshiwara said.

The colleges hope that money from the state’s rainy day fund and the federal government will blunt the damage.