Skip to content
By
Caralee Adams
The Hechinger Report

Kathy Neumann’s third-graders at Longfellow Elementary School in Columbia, Maryland, struggled to understand fractions during this pandemic-disrupted school year. With remote learning, they couldn’t do their usual classroom activity of cutting strips of construction paper into halves, quarters and thirds.

“Doing it on a computer screen just is not the same thing,” said Neumann, who is eager to get back to using “old-school materials” — paper, pencils and rulers — when her district returns to in-person learning this fall. “I’ve seen a difference this year without using our hands-on tools. No matter what we put on the computer, no matter how much fun it looks, they’re not getting it.”

During the COVID-19 crisis, students’ performance in math has taken a hit more than any other content area, according to a recent study by the NWEA. And, since math concepts build upon one another, it’s critical to make up lost ground sooner rather than later, all while maintaining student enthusiasm for the subject.

Yet, Neumann believes most students will bounce back, if those who returned to in-person learning in the spring are any indication.

“At home, they’re [lying] on the sofa, doing half the work. When they come into my classroom, they’re sitting in front of me. They’re raising their hands. They’re doing their work. It’s almost like Jekyll and Hyde,” she said. Neumann said she was “very optimistic” that if things returned close to normal this year, “these kids will be in a good spot.”

Neumann is fortunate to teach math in a district that’s doing many things right as an unprecedented school year starts. Howard County, located southwest of Baltimore, is about accelerating learning for all and providing extra support as needed, rather than labeling some kids as being behind and remediating. 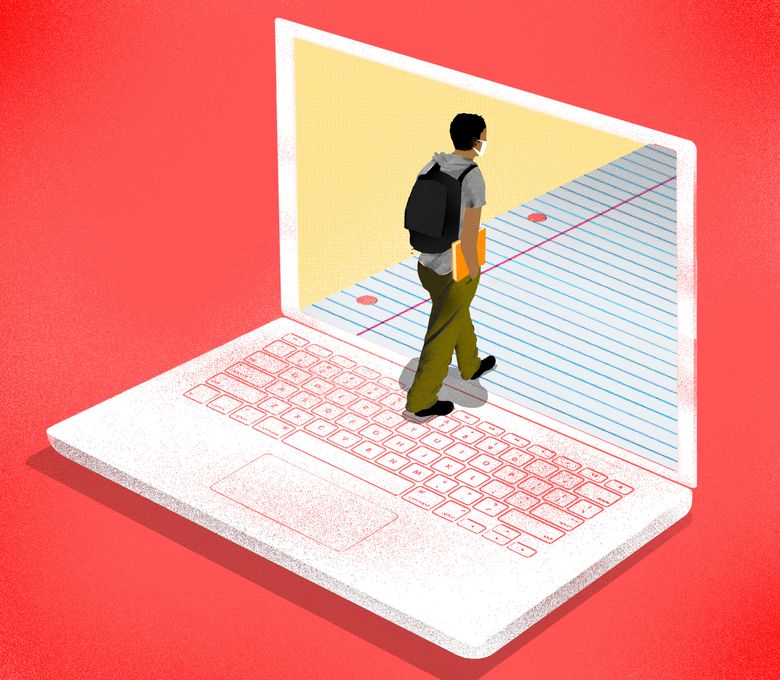 Like many districts across the country, Howard County switched to virtual instruction in the spring of 2020. That continued until February 2021, when buildings gradually reopened with a hybrid model. The district plans to return to a full-time, in-person schedule for 2021-22.

With virtual instruction, teachers said lessons often took longer, and they were not able to progress through the whole curriculum as they would have in a typical year, said John SanGiovanni, coordinator of elementary mathematics for the school system, which serves nearly 60,000 students.

About one-quarter of students qualify for free and reduced-price meals in the district, which is about one-third white, 25% Black, 23% Asian and 13% Hispanic.

In a poll of elementary teachers in May, the district found about 20% felt their students did not have a good understanding of a core math topic — such as fractions for third-graders or division for fifth-graders — and would need considerable reteaching as the concepts came up next year. The district also removed some math topics that would be covered in a typical year, such as identifying symmetry and geometric patterns from the fourth grade standards, and work with coordinate planes in the fifth grade.

Still, SanGiovanni said, plans are in place to work those standards into the following grade’s content as needed, with an emphasis in the fall on moving forward.

This strengths-based approach, which other districts have shown can boost achievement, is the best way to tackle math support this year, said Beth Kobett, a professor of education at Stevenson University in Maryland who focuses on math instruction. Emphasizing deficits and what students are lacking can start a cascade of problems and jeopardizes their learning in the future, she said. Teachers may end up lowering their expectations for students, and students can develop self-defeating attitudes about their math abilities.

“If we go in with fear, we’re going to scare them and ourselves,” said Kobett.

Kids will need time to settle in before being assessed, Kobett said, suggesting teachers provide rich experiences with math where students can see connections. “Focus on doing some work together collaboratively. Students are going to be so excited to see one another that we need to capitalize on this joy.”

Summer Appler, an elementary-school teacher in the Howard County district for 13 years and now a math specialist at Longfellow Elementary, recognizes students may need a “grace period” to get acclimated to being back in person. Still, she will be eager to see what they know.

To get a snapshot, Appler said this fall she will work with teachers in the classroom to use “first-week tasks,” developed and recommended by the county math office, to assess students’ knowledge of standards such as addition, subtraction and measurement.

For example, one task might ask the students how a scientist could figure the difference in weight between a giraffe and an elephant at a zoo. The idea is to get kids engaged in an activity that involves a real-life problem, while she observes how they solve it rather than stepping in to help.

“It’s not presented as a test. They are not circling the best answer on page after page,” she said. “They are able to talk, too — that’s a big thing. We allow them time to run an idea past a partner to see what they are thinking.”

Kobett, the education professor, said math interventions can include working with small groups of students who have different abilities. Those groups can also be given a preview of the next topic, such as learning about decimals by doing an activity on a number line, to boost their confidence moving forward.

“It’s going to need to be really strategic,” Kobett said, particularly in avoiding the tendency to group students by ability in separate tracks. She said districts should look at standards that are most important — for example, understanding how place value works in multiplication in third grade.

“We really want to make sure that we’re not rushing to get them to the end, but actually spending the time developing that understanding of multiplication, because that’s going to feed into everything in the later grades,” she said.

Math is “uniquely sequential and hierarchical,” said Douglas Clements, a professor of education at the University of Denver and a researcher in early math instruction. “With math, any little bit of learning loss you suffer tends to reverberate,” he said. “It’s really important we find out what level kids are at and address those learning losses.”

Clements advocates for a developmental approach that emphasizes understanding over rote memorization, a strategy backed by other researchers. “Math should make sense,” he said. “We really believe you have to build up from the assets of the child. That’s the only equitable approach.”

For kids falling behind, even a few extra minutes of math support in small groups can be helpful. Instruction shouldn’t stay at a slower pace than for others, but rather be carefully planned to progressively move students toward at least the average class level and allow them to catch up, Clements said. “Even if there is differentiation, but we don’t give the kids extra time and extra resources, they will stay at a parallel track, still further behind,” he said.

Howard County will use its math coaches more in elementary schools to help teachers make sense of student data and to customize lessons quickly, SanGiovanni said. And, rather than pulling kids out for intervention, the district will ensure that small-group instruction happens within the classroom. Similar approaches have helped other districts turn around math scores for struggling students.

“The best place to learn math is in math class for each and every student, no matter what their needs are,” said SanGiovanni. “We don’t want to isolate students. Period.”

Just as schools have reading specialists, the district has added new math specialists — like Appler — to be in place by the start of school in the fall to provide co-teaching, intervention, monitoring and assessment of students.

Going into the fall, SanGiovanni said the district is examining the curriculum to find efficiencies. That might mean, for instance, that second-graders may not do a unit on time and money, to instead work on their addition and subtraction skills, he said.

On top of making the most of the class time, Howard County plans to offer in-person tutoring programs before or after school — or even on Saturday mornings or evenings. The evidence for high-intensity tutoring is strong. In Howard, the tutoring sessions will likely be short-term, however, no more than a month or two, to address certain skills for groups of no more than six students.

“We’re looking at getting students tutoring access for things that they need, and then getting them back out,” said SanGiovanni.

The district may involve families or, perhaps, offer some virtual sessions to get the most participation. In the summer of 2020, one Howard County elementary school ran a small, five-week virtual-tutoring program for rising third-graders who were identified by teachers and through test scores as needing extra help. Their parents were emailed additional independent practice work to do with them.

Stephanie Martin of Columbia, the mother of Peighton, a rising third-grader, and Evan, a rising first-grader, said she enjoyed the virtual-family-math nights offered by her children’s elementary school during the 2020-21 school year.

The two children did well with remote instruction, Martin said. But they also took advantage of an in-person summer-school enrichment program sponsored by the district, which mixed academic programs like math and reading with other activities, like yoga.

Martin said she’s pleased that Evan is talking about math and making connections outside the classroom, while Peighton is getting a preview of multiplication.

“It will give her a good foundation, so it’s not like completely new,” said Martin, who says her kids have smiles on their faces every day when she picks them up. “The learning is being catered to them in a way that they understand, and it’s enjoyable.”

This story about math was produced by The Hechinger Report, a nonprofit, independent news organization focused on inequality and innovation in education. Sign up for the Hechinger newsletter.