Naomi Simpson sat with two kindergartners at the front of her classroom in Midlothian, Texas, instructing them to, “Get your blending arm ready.”

Simpson arranged three letter tiles on the wood table in front of her students, straightened her left arm and then reached for her shoulder.

When she patted the top of her arm, she made an “sss” sound. Then she sounded out an “ah” as her hand glided to her elbow. By the wrist, she rolled her lips back to make a “puh.” The girls imitated her, combining the letter sounds into a word, while sweeping their hands down their own arms to mimic the progression.

This is intervention time at Vitovsky Elementary, where nearly 60% of students come from low-income backgrounds and a quarter are learning English. 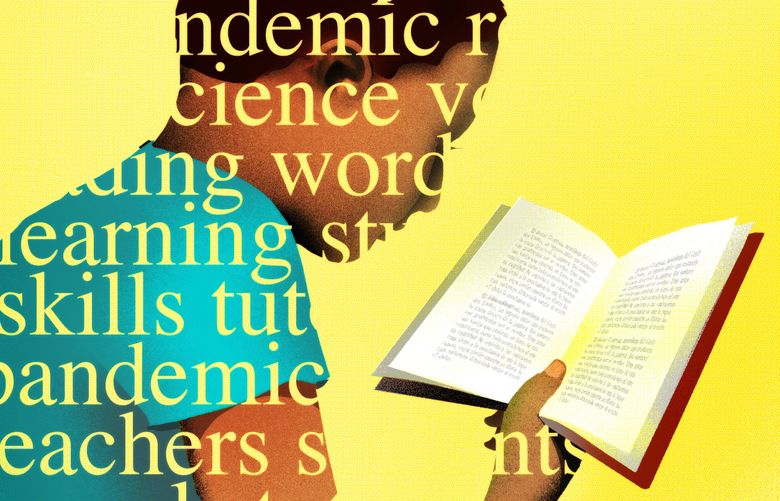 Across the U.S., students are struggling to read at grade level. But new state policies and classroom practices are helping some kids catch up. The Seattle Times published this series of stories about new challenges and solutions in literacy in partnership with The Christian Science Monitor, The Hechinger Report, the Solutions Journalism Network and the Education Labs at AL.com, The Dallas Morning News, and The Fresno Bee.

Texas students’ reading scores have long lagged behind the rest of the nation. And the pandemic only made challenges worse.

So a new state law requires public schools to offer intervention for students lagging behind academically. Legislators overwhelmingly backed the bill, which requires districts to provide students who failed state tests with 30 hours of focused tutoring or to be matched with highly rated educators.

That’s a daunting undertaking for local school officials who are struggling to find enough tutors or time within the school day to fulfill the mandate.

But for the past five years, Midlothian elementary schools have baked in 45 minutes each morning to work with children who need extra help, grouping them with others who need similar types of support.

“It’s really starting with your data first and understanding where your students are, and then working to actually build some sort of intervention program that’s going to hit on those necessary skills,” said Becki Krsnak, Midlothian’s director of curriculum and instruction.

Vitovsky Principal Hollye Walker said that without the intervention period already embedded into her school’s culture, she doesn’t know how the campus would pull off the new state requirement.

At her campus, more than 120 children require the elevated level of tutoring after they failed at least one STAAR exam — and that’s just students in fourth and fifth grade. Even more children, too young to take state tests, have noticeably fallen behind this year.

Education Commissioner Mike Morath estimates Texas students have lost half a decade of progress in reading. Without this foundational skill, students could struggle to calculate word problems in math, grapple with historical texts and even comprehend experiments.

“Literacy is the language of social studies, science and knowledge,” said Sharon Vaughn, director of the Meadows Center at the University of Texas at Austin.

In the last decade, Texas’ reading performance in fourth and eighth grades hovered in or near the bottom 10 states, according to the National Assessment of Educational Progress, often called “The Nation’s Report Card.”

In 2019, the most recent year available, fewer than one-third of Texas fourth graders and a little more than one-quarter of eighth graders were deemed proficient on the reading NAEP exam. Little progress has been made in recent years.

The NAEP measure includes testing data from across the country going back decades, making it a consistent indicator of progress.

State officials typically use results from Texas’ own standardized exams when analyzing progress over time, although it is hard to draw conclusions from the data because the tests change in multiple ways.

On the most recent administration of the State of Texas Assessments of Academic Readiness, or STAAR, more than one-quarter of third, fifth and eighth graders failed the reading tests. Fewer than half of students in those grades were determined to be on grade level.

The pandemic made learning to read even more difficult, resulting in precipitous drops to already lackluster results.

Technology issues cut down on instructional time as teachers had to keep virtual students on task, while also splitting their attention with kids learning in-person.

With young children, it can be especially key to place them in front of an educator.

“The teacher can watch the way their mouth moves, the way they hold their pencil and write their letters,” Krsnak said. “Every bit of that you could see on the video, but it just wasn’t the same impact.”

Some sounds you can’t even make correctly unless you whisper them. “Through a video, you’re trying to speak a little bit louder and you end up” muddling what you’re trying to teach, the Midlothian administrator said.

When youngsters are learning sounds, they need to watch their teachers’ mouths and tongues and teeth to see where they are as the sounds are formed. That kind of observation is more difficult from behind a mask, presenting even more challenges for students learning English as a second language.

The teachers at Vitovsky decorate their classrooms with images of mouths in the middle of making sounds.

Simpson adorns her walls with a “Vowel Valley,” displaying the way students can shape certain sounds that they are learning. Students in a first grade classroom have handheld mirrors on their desks so they can watch their lips and teeth as they work through letters.

It all relies on the science of reading, which focuses on the core sounds that make up words based on research about the way the brain decodes language.

Texas renewed its focus on that foundational approach in 2019.

That year, state lawmakers passed a school finance overhaul that also included a requirement that all prekindergarten through third grade teachers complete a Reading Academy focused on science-backed strategies.

Texas previously zeroed-in on such a strategy in the early 2000s, Krnsak noted, but those efforts were forgotten or replaced. Experts lamented that scientifically backed strategies have been controversial through the years — in what was called the “reading wars” when officials disagreed on the best way to teach literacy — or quickly elbowed out by a new “silver bullet.”

Focusing on reading research is “the only way we’re going to really lift the waters and bring kids up to levels that allow them to be literate,” Vaughn said.

The new push aimed to get all Texas pre-K through third teachers trained on these concepts by the end of 2022-23, but the pandemic pushed back that deadline.

In North Texas districts, the number of teachers who have gone through the academies varies.

Cedar Hill ISD teachers, for example, are just now starting in the academies. Carrollton-Farmers Branch officials anticipate 96% of required educators will complete them by the end of this year. An estimated 1,700 Dallas ISD teachers won’t begin the reading academies until next school year.

“If there were no pandemic, I would say, ‘Gee, we need to turn the fire up on this. This is not being taken with the urgency we would hope,’” Vaughn said. “But under the cloud of the pandemic, I don’t know what the right answer is quite honestly. Like how do you prioritize?”

Some districts who moved ahead with Reading Academies only offered them through a mix of online and in-person training, which diminished the power of having conversations and putting things into practice.

“It just almost was a wash,” Krsnak said.

Visitors to Vitovsky classrooms can see them in practice, such as differentiating instruction based on small groups and providing immediate teacher feedback while students are practicing new skills.

These strategies will play a big role in pandemic recovery as schools are required to set aside extra intervention time to fill in gaps created since 2020. Tutors — often college students, retired teachers and other volunteers — must undergo training on how to help with reading.

But even the extra federal money funneling toward districts won’t solve all the problems this new tutoring mandate presents. Dallas ISD Superintendent Michael Hinojosa said the Legislature’s actions are causing a “high degree of frustration” among educators.

Districts just can’t implement it, he said. Tutors are hard to come by and scheduling so many intervention hours is a difficult logistical puzzle. DISD had more than 50,000 students fail a STAAR exam.

If a district as large as Dallas ISD is struggling to make it work, that raises even more questions about how small and rural systems will handle it.

“If nobody can execute it, it’s not reasonable,” Hinojosa said. “We know it’s the right thing to do, but we’re all concerned about how we’re going to execute on it.”

Deputy Superintendent Susana Cordova said focusing on catching students up in core areas — like literacy — is more critical than other subjects. DISD leaders had hoped legislators would allow them to be flexible on how many kids can be paired with a tutor at once.

After hearing similar feedback from school leaders, Rep. Dan Huberty, R-Kingwood, proposed tweaks to the bill in a special legislative session. He hoped to lessen the number of required tutoring hours for all students and allow districts to work with them in slightly larger groups. Attempts to rework the bill failed to gain traction.

Rep. Harold Dutton, D-Houston, chair of the public education committee, said the governor appeared not to be interested in changing the law and has not indicated any plans to call another special session to address the issue.

So to fulfill the spirit of the legislation — and to help kids recover — school districts are leaning heavily on volunteers and nonprofits, many focused specifically on reading.

Krsnak, in Midlothian, remains optimistic that schools can hit their pandemic recovery goals. She’s seen the impact that targeted, research-based intervention can have on kids’ reading skills in the universal screening activities teachers use three times a year to identify specific strengths and weaknesses in students’ foundational skills.

Since focusing on reading interventions, Midlothian’s reading STAAR scores have beat the state and regional averages. While the district as a whole serves relatively low numbers of poor students, its highest poverty campus — Vitovsky — has stayed relatively in line with the state on standardized tests in recent years.

And while the pandemic clearly caused setbacks among most students, initial results from Midlothian’s first screening assessment this year were promising, Krsnak said. Teachers who have embraced the science of reading among lower grades are already seeing gains.

“If we really do a good job with intervention,” she said, “it can happen faster than what the general public may realize.” 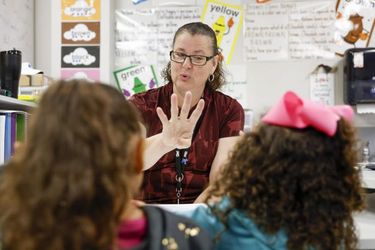 Across the U.S., students are struggling to learn how to read. But new state policies and classroom practices are showing success in helping kids catch up.

Hear from a classroom teacher and curriculum specialist from Texas, a Washington state district superintendent, and a key architect of Mississippi’s statewide reading plan.

In this free webinar on Tuesday, Nov. 16, at 4 p.m. PDT, they’ll discuss how systemic obstacles might be removed so we can better reach and teach struggling readers. Click here to register and submit a question to the experts.