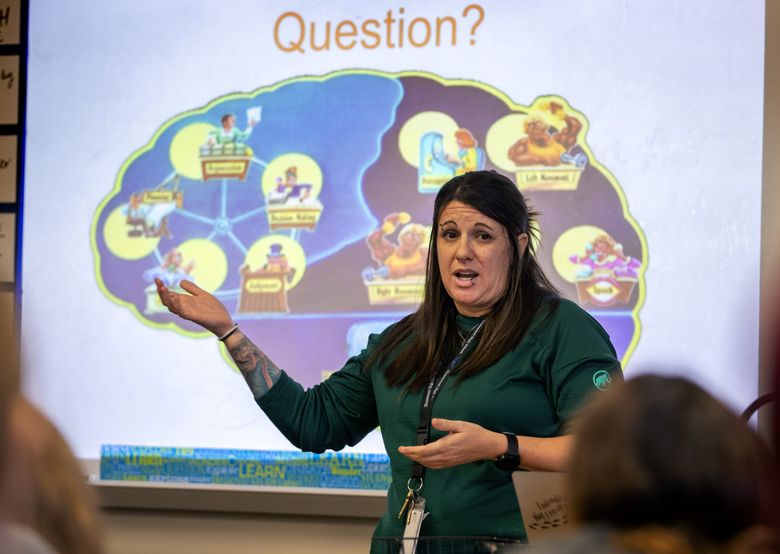 Amber Langon, a prevention/intervention counselor for the Shoreline School District, gives a presentation to students in Joann Fukuma’s health class on how vaping and drugs affect brain development. (Mike Siegel / The Seattle Times)

It was smoke tricks on social media that swayed 17-year-old Audriana Slye to buy her first vape, and the weightlessness of a nicotine buzz that kept the mouthpiece at her lips for two years.

An adult friend got her a device made by Juul, the company that Seattle, La Conner and other school districts nationwide are taking to court for its advertising, which they say targets youth.

When the addiction kicked in, the West Seattle High School senior was finishing a cartridge in two or three days, the nicotine equivalent of 20 cigarettes. Like a fidget spinner, it became a distraction for idle moments.

She answered many of her cravings — which make her mouth water and body jitter — at school, taking hits in the bathroom or during class, where she would blow the vapor into her sleeve, she said. The devices she and her friends used were small, the size of USB sticks, and went largely undetected at her schools, where she said education about vaping was limited to a handful of posters and confiscated devices.

While school districts in Washington have raised awareness on substance abuse and prevention for decades, the state’s Student Assistance Prevention-Intervention Services Program that funds drug- and alcohol-prevention specialists in state schools has dwindled. Between the 2004-2005 and 2017-2018 school years, the number of schools served through the program dropped from 809 to 91, an 88% decline, said Mandy Paradise, program supervisor for the state education department.

The program lost its grant funding through the federal Office of Safe and Drug-Free Schools in 2010. Three years later, it shrank further after a restructuring by the Washington State Health Care Authority in 2013, which narrowed the scope of the program to higher-need areas. As a result, the state dedicated less money to it, Paradise said.

Many districts are supplementing this loss of funding through grants and other means. But the surge in teen vaping and nicotine addiction is testing their limits: Between 2014 and 2018, there was a 20% increase in the number of youth reporting electronic cigarette or vape use in Washington, according to the state’s Healthy Youth Survey. A quarter of high-school seniors surveyed in King County reported vaping last year, and in Seattle, the number of 10th graders who reported vaping rose 250% between 2016 and 2018.

Slye decided to quit this month after noticing that her asthma and ability to focus had worsened. As she kicks the habit, Slye says she wants other students to consider doing the same. And even though adults at school weren’t a part of her decision to stop, she says they still have an important role to intervene.

Relatively odorless and designed to be discrete, those devices — loaded with cartridges that contain a concentrated amount of THC or nicotine — can easily fly under the radar of unsuspecting parents or teachers.

Educators and public officials say the rise in vaping among teens coincides with the introduction of vapes made by companies like Juul, which paid social-media influencers to promote its products. (The company, which recently halted its advertising, did not respond to a request seeking comment on lawsuits filed by school districts here.) The mission of Juul products, according to the company’s website, is to improve the lives of smokers and offer a better alternative. But its products gripped youth at a time when cigarette smoking was at historic lows.

“We see this cyclical rise with some products,” Paradise said. “They’re like Pokémon, they continue to evolve. You have to be ready.”

Forty-seven deaths and nearly 2,300 lung injuries have been linked to vaping and e-cigarette use nationwide, according to the Centers for Disease Control and Prevention; people under 25 make up about 53% of those injuries, with 15% being under 18. In Washington, 19 cases of illness have been tied to vaping since April, about a third involving patients between 10 and 19 years old. Preliminary research suggests some chemicals found in vapor products might be to blame.

“I’ve heard the kids call one of the bathrooms the ‘vape closet,’ ” said Whitney Meissner, superintendent of the La Conner School District, the first district in the state to file suit against Juul. There, 70 miles north of Seattle, 40% of high-school seniors surveyed reported vaping in 2018, 10 percentage points higher than the state average.

Officials hope that recent changes in state policy will curb use among youth, including the state’s 120-day ban on flavored vape products and the 2020 law that will raise the legal age to buy non-cannabis smoking and vaping products from 18 to 21. In the meantime, drug and alcohol counselors based in schools are focusing their energies on information campaigns for kids and adults.

Unlike cigarettes, youth (and sometimes parents) don’t always think of vaping as risky, said Amber Langon, a prevention specialist at the Shoreline School District. So her strategy has been to highlight the headlines and explain how nicotine can harm brain development for young people.

At Shorewood High, a class of mostly freshmen sat up in their seats when Langon showed an ABC News’ “Nightline” special about a young woman who vaped until her lungs failed.

“You’ve been taught your whole life not to smoke cigarettes,” Langon said. “They advertised to you guys again.”

After the video played, students Ariana Cruz, Hirna Mellsie and Dominic Olson clustered together during a break. They all said they knew people who vaped, but they had different answers about how big of a problem it was at their school.

“I was in the bathroom, and I overheard two girls saying how they wanna stock up” on vapes before the age limit changes to 21 in January, she said.

Langon splits the prevention work at Shoreline with her counterpart, Coquille Johnson. Both say they’ve seen their caseloads increase significantly and work with middle-schoolers to ensure they’re building relationships early on.

Some are even referring themselves for help getting off nicotine.

“I have Trident gum in my office all the time, you can come get it all day, no questions asked,” Johnson said.

She said she’s learned valuable lessons along the way about how to get the word out after she saw vape usage explode last school year. When she put posters about vaping in bathroom stalls at Shorecrest High School, students vandalized them and threw them in the trash.

After that, she switched to small talking circles in classes where they learn about the science and effects of vaping on youth by discussing news articles, which helps engage more students. She said she’s seen discipline rates decline since then.

Seattle screens seventh graders for drug and alcohol use. Here, officials decided to focus the bulk of their efforts in middle school, too.

Making sure employees and parents have up-to-date information on vaping is an important part of the response, said Lisa Davidson, who heads prevention and intervention for the district.

At a training this month, she passed out a few confiscated vaping products to a small group of staff working in middle schools and explained their basic parts. Of the 79 drug paraphernalia taken from Seattle students this school year, more than half were vaping-related, according to the district. They pile up in safes at Seattle Public Schools headquarters in Sodo.

She also showed a few examples of videos and slides that educators could use in their classroom presentations on vaping. Like Johnson and Langon, Davidson also favors a straightforward approach that isn’t preachy.

“I’ve had teachers tell me that this content isn’t scary enough,” Davidson commented during the training. “But I actually like that it presents the information and lets the students decide for themselves.”

That’s also what the Washington State Department of Health (DOH) had in mind when it launched a vaping cessation app for youth called 2Morrow. With 300 sign-ups so far, the app is designed to help young people think critically about their cravings and offers lessons about the science of vaping. It also allows the user to easily change their quit-date goal in case they slip.

“Nicotine is one of the most addictive substances on the planet,” said Nick Fradkin, a tobacco-cessation consultant at DOH. “The main message is that you don’t want to be beholden to this chemical. Youth don’t want to be manipulated.”