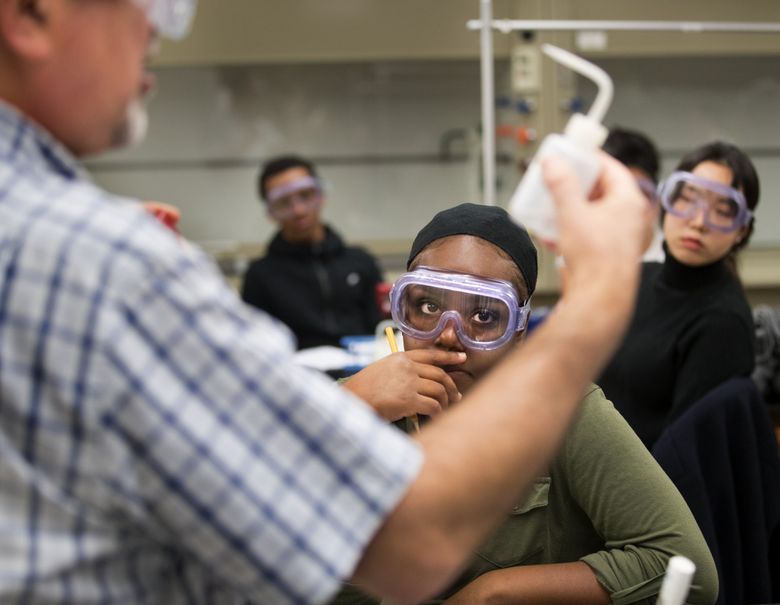 The dual-credit program that allows students to get college credits while in high school at little cost is proving to be a national model, but benefiting most are middle-class students who planned to go to college anyway.

It’s a drizzly day in late November. A crash on Interstate 5 has tied up traffic for miles — and made Nia Hall very late to her political-science class at Seattle Central College.

As she slings her backpack to the floor and takes a seat in the front row, her mind is on the chemistry lab she missed earlier that morning. The instructor has sternly warned students there are no makeups.

This is not high school. Miss a lab, fail the class.

High school at sea: Everett marine-biology school shines, but other districts aren’t on board

Hall, who is 17, fights back tears as she thinks about her college transcript, which she began building two years ago as part of a state program called Running Start — a program that allows high-school students to earn college and high-school credit at the same time, knocking thousands of dollars off skyrocketing tuition costs.

Education Lab is a Seattle Times project that spotlights promising approaches to some of the most persistent challenges in public education. It is produced in partnership with the Solutions Journalism Network, a New York-based nonprofit that works to spread the practice of solutions-oriented journalism. Education Lab is funded by a grant from the Bill & Melinda Gates Foundation. For more information visit seattletimes.com/education-lab »

In 25 years, this dual-credit program has grown into a powerful, nationally recognized force with double-digit enrollment growth. It is so successful, in fact, that some think the state should do more to champion Running Start and bring in greater numbers of low-income and minority students who could benefit the most from such a program.

To make Running Start work for them, high-school students like Hall, a senior at Garfield, must take on adult-sized responsibilities — getting to a college campus on their own and managing the freedom that comes with a college schedule.

The risks can be great. A failed college class becomes part of a student’s college transcript, which could jeopardize access to financial aid.

But so, too, are the rewards. Last year alone, 3,111 students earned associate degrees along with their high-school diplomas, saving themselves and their families up to $39 million combined in college tuition. For Hall, the savings could help her earn a full year of college credit and bring her closer to her dream of becoming a lawyer.

That’s why Hall was so concerned about missing her chemistry lab.

Educators once worried that dual-enrollment courses amounted to double-dipping — getting credit twice for the same class. But the success of these programs nationwide has put many of those fears to rest.

“If they’re truly ready to take college classes,” said Adam Lowe, a national expert in dual-credit courses, “Why should we hold them back?”

If they’re truly ready to take college classes, why should we hold them back?” - Adam Lowe, a national expert in dual-credit courses

Leader in the field

Washington was one of the first states to offer nearly unlimited, free community-college courses to high-school students, and remains one of the leaders in that field, said Lowe, the executive director of the National Alliance of Concurrent Enrollment Partnerships. The North Carolina nonprofit supports and studies concurrent, or dual-enrollment, courses.

It’s not the only dual-credit program for high-school students — and with an enrollment of 27,000 this year, it’s not even the largest. More students take Advanced Placement classes, and nearly as many take College in the High School — college-level courses taught by teachers in high-school classrooms.

But Running Start is the only program that’s practically free, nearly unlimited and takes place on a college campus, allowing students to escape the high-school social scene. Students can take any course offered at a community college and some participating four-year universities, as long as they meet the prerequisites.

Running Start was “a largely overlooked portion” of a high-school open-enrollment bill adopted in 1990, but it “may turn out to be the session’s lasting education legacy,” The Seattle Times wrote at the end of the session that year.

It launched in 1992-93 as a pilot program with a few hundred students. In the early years, just a smattering of students came to Seattle Central, said faculty member Tracy Lai, who teaches history.

Some critics worry that students enroll just to escape high school, and if they wash out, they won’t earn a diploma — much less a college degree. But state figures show Running Start students complete and pass 90 percent of the courses they attempt, said Ruben Flores, who oversees the program for the State Board for Community and Technical Colleges.

At the University of Washington, the state’s most selective public school, Running Start credits are held in equally high regard as Advanced Placement or International Baccalaureate, said the UW’s Philip Ballinger, executive vice provost for enrollment management.

To participate, students must be approved by their high schools, provide their own transportation and pay for textbooks and class fees. Lai finds most of her Running Start students are ready for the challenge, but some struggle to keep up with the volume of reading.

The state funds 93 percent of the cost of a full-time Running Start student, which amounted to $131 million in 2016-17. Seven percent is retained by the school district for administrative purposes, and the rest is transferred to the community colleges.

Hall, who is African American, wants to go to one of the nation’s historically black colleges and universities, and then to law school. Her teachers say she’s very smart and highly motivated.

Earning a year of college credit would be a huge help for this earnest young woman, who has expressive eyes magnified by tortoiseshell glasses. For her, college is no sure thing: Her family’s finances are compounded by health issues, including her mother’s multiple sclerosis and a sister in a wheelchair.

In her freshman and sophomore years at Garfield, Hall took advanced or honors courses, but she felt teachers were spoon-feeding her information. Hall knew that if she just wrote a long essay or regurgitated facts, she’d always get an A.

At Seattle Central, she must do her own research. Instructors don’t give students deadline extensions on assignments. There’s no study guide for the test — you’re expected to make your own.

“It teaches you to work for quality, and not for quantity,” she said.

Hall still thinks high school is fun, the place where she hangs out with friends and plays for the softball team. But at the start of her junior year, she took a look at her Garfield class schedule and thought, these classes don’t look very challenging. I can do better.

Seven years ago and 30 miles to the north, Cascade High School student Hayley Statema also chafed at the slow pace at her Everett school.

Statema also loved some of the social aspects of high school — she was captain of the color guard and president of the school’s German Club. But she doesn’t mince words and describes a lack of rigor and absurdity of standardized testing. “The entire K-12 education system needs a rehaul,” she said.

Statema started taking Running Start part-time at Everett Community College in her junior year. She sat next to adults who were serious about college — like the Hispanic mother of five who went back to school to earn her bachelor of science degree in nursing.

Being friends with moms and dads “was so cool,” Statema said, and “Everybody was there to learn.”

After high school, Statema earned a communications degree at Washington State University Everett, where she was the campus’ student-body president.

She was the first in her family to go to college, and she graduated debt-free. Today, she’s a marketing and development associate at ChildStrive, an Everett nonprofit.

Not every student uses Running Start as a college shortcut. The credits can also help students earn a second major, study abroad or go to graduate school.

All of her credits transferred to Seattle Pacific University. She finished her bachelor’s in two years and, at the age of 20, she’s working on a master’s of science in taxation at the University of Washington.

If not for Running Start, she could not have afforded the graduate degree. She and her brother run a small manufacturing business. When she graduates in June, she’ll step in as the firm’s accountant.

If there’s any ding on the program, it’s this: Running Start mostly helps middle-class students who were already planning to go to college. It may be providing a kind of financial aid to a group that needs it less.

In 2016-17, fewer than 5 percent of Running Start students were low-income, compared with nearly 13 percent of Advanced Placement students.

The lack of diversity and participation by low-income students is a concern, said Jan Yoshiwara, the executive director of the State Board for Community & Technical Colleges.

To try to improve the numbers, nearly every community college now has a Running Start coordinator who helps find cheaper books and coordinates transportation.

When Hall’s family lived near Garfield High, she had no problem getting to Seattle Central at 8 a.m. every day for her three college courses. But her family moved to Shoreline in October, before the quarter was over, to a less-expensive home that’s wheelchair-accessible for her sister.

That’s a mouthful to explain to a chemistry professor whose lab you have just missed.

And so, on that November day when Hall was late, she found herself knocking on her chemistry instructor’s office door. To her relief, Esmaeel Naeemi told her she could do a lab makeover, providing she could do it at noon — in less than an hour, which meant skipping lunch and the first hour of a two-hour-long calculus class at Garfield High.

Hall went outdoors to track down her gray Honda Accord, parked for free in a two-hour zone. At all costs, she wanted to avoid a $44 parking ticket.

Paid parking is not an option when you already put in 22 hours at a pizza restaurant each week to buy gas, as Hall does.

After she finished the chemistry lab, she took back roads through Capitol Hill, dodging traffic, to Garfield. She stopped in the nurse’s office to grab a free granola bar — lunch for the day.

Lowe, the national expert on dual-credit courses, said many of the discussions around reinventing high schools involve “personalizing” the experience for students, doing away with the one-size-fits-all model of the traditional high school and making sure kids are learning things they find interesting and relevant to their lives.

Programs like Running Start do that very thing, he said, by opening up the entire community-college course catalog to students who can handle the work.

[Note: This story has been updated to correct the spelling of Hayley Statema’s name.]