The Biden administration’s new port envoy is coming on board at a time when supply chains across the nation have been disrupted by the pandemic and record numbers of ships are bottlenecked near Seattle and other West Coast ports.

In the envoy role, Porcari will work with a White House task force and the Department of Transportation to help get goods flowing freely across oceans and around the country. The pandemic has led to rolling closures of factories and ports around the world, disrupting finely calibrated supply chains, slowing shipments and contributing to rising prices in the United States. 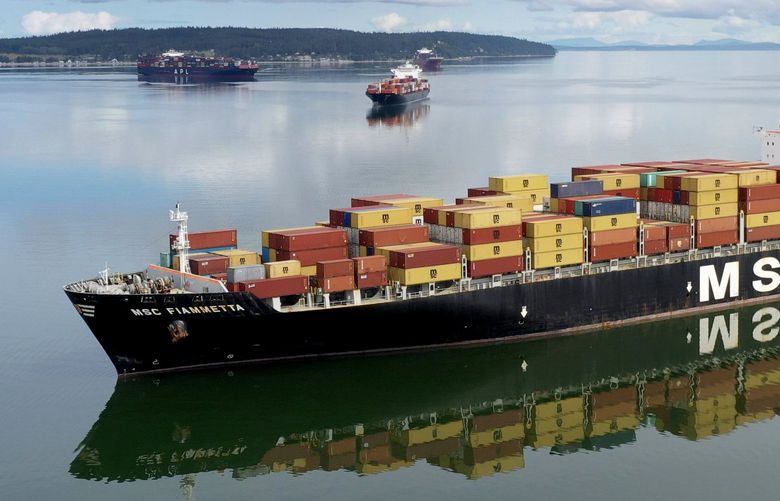 The ports in Los Angeles and Long Beach, California, key links with Asia, have been especially affected with ships waiting offshore and cargo sometimes sitting for almost two weeks to be transferred to a rail car. A record 71 ships were waiting at anchor off the two ports Friday, according to the Marine Exchange of Southern California, breaking the previous high of 68 ships earlier this month.

Delays in Southern California have caused a “domino effect,” worsening backlogs of a week or more at terminals in Seattle and Tacoma, said Melanie Stambaugh, a spokesperson for the Northwest Seaport Alliance, which manages Puget Sound’s large container terminals.

Ten ships are currently anchored in Puget Sound waiting for terminal space to unload their cargo, Stambaugh said, with four more ships on their way. Before the pandemic, it was rare for ships to wait at anchor in Puget Sound; in the past several months, so many vessels have lined up here that the U.S. Coast Guard has been sending some to idle in a rarely used Whidbey Island harbor.

“I am excited to hit the ground running and get to work immediately with industry, labor, and other port stakeholders to address these challenges and to build a more resilient, future-facing supply chain that powers our economy into the future,” Porcari said in a statement.

The White House said its work on supply chains had shown that problems at ports — some of which it said have existed for years — will need the attention of a dedicated official.

Transportation Secretary Pete Buttigieg said Porcari’s record of “leadership in both the public and private infrastructure sectors make him uniquely qualified to work with stakeholders and federal agencies to address supply chain disruptions.”

Porcari previously served twice as Maryland transportation secretary, a job that also made him chairman of the Maryland Port Commission.

Biden ordered a review of supply chains in February and formed a task force to work on them in June. The federal government is seeking to help resolve pandemic-related disruptions while also tackling what it sees as decadeslong problems affecting the supply of products like semiconductors and electric vehicle batteries.

Biden signed an executive order in July aimed at increasing competition among shippers, and is hoping to secure $17 billion in spending on ports and waterways in the bipartisan infrastructure bill that passed the Senate. Still, benefits from those measures likely would not be felt in the short term.