Washington’s unemployment agency is sending out layoff notices to a quarter of its own staff, due to the loss of temporary federal money.

Officials at the Employment Security Department say losing the 769 temporary workers, brought on to help with heavier claims volumes earlier in the pandemic, won’t bring back problems from that period, when claimants sometimes waited months for benefits and spent hours on hold with agency’s call centers.

“We feel confident that we are retaining enough staff to be able to address our upcoming workload,” said Nick Demerice, ESD spokesperson.

But some labor and worker advocacy groups question whether the cuts could affect several upcoming initiatives. That includes an agency review of thousands of claims for federal pandemic benefits that were denied but now may be eligible for payment.

“How are they going to wade through all of this?” said Anne Paxton, policy director with the  Seattle- and Spokane-based Unemployment Law Project, which represents people who are denied unemployment benefits. “It’s not a great time to cut back.”

Positions subject to layoffs span the claims process — from call center staff to those who review disputed claims or investigate suspected fraud to supervisors, Demerice said. 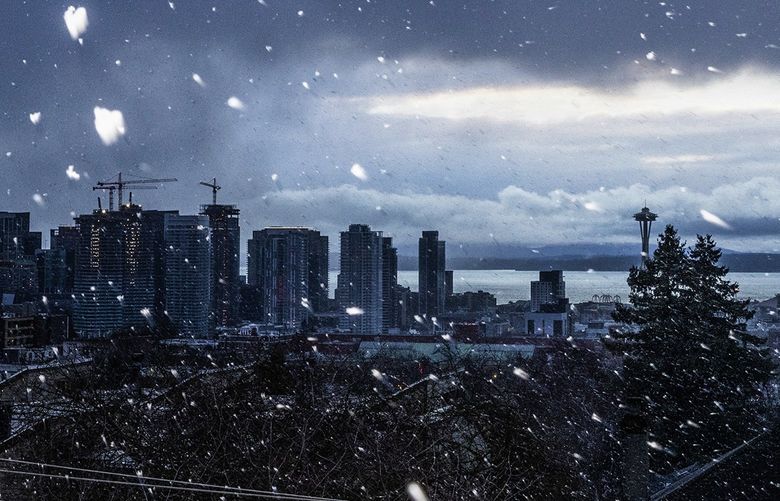 ESD officials say they had no choice about the cuts, which will be completed by the end of April. The 769 positions were paid for with federal funds, including money that automatically rises and falls with the volume of unemployment claims. Those funds increased sharply in 2020 as pandemic-related layoffs hit Washington and other states, but have since fallen off, Demerice said.

Many of the workers will be transferred to other agency roles, Demerice said.

The agency’s declining workload is reflected in the falling numbers of Washingtonians filing for unemployment. For the week ending Saturday, the ESD received 4,848 new, or “initial,” claims for jobless benefits, according to data posted Thursday.

That represents a 2.4% increase over the prior week, but it’s a small fraction of what ESD saw during the first two months of the pandemic in spring 2020, when new claims were averaging around 133,000 a week.

Even after the early wave of layoffs subsided, new claims averaged around 24,000 a week for the rest of the year.

Those high volumes led to massive delays in benefit payments by ESD, as it did in most states. Delays worsened after the agency discovered a wave of unemployment fraud in May 2020 and briefly suspended payments and subjected many claimants to additional, time-consuming scrutiny.

Still more delays occurred as workers who’d had their benefits denied by ESD and had appealed were forced to wait months while their appeal was processed by ESD and heard by the state Office of Administrative Hearings.

More issues emerged in late 2020 after federal eligibility requirements led ESD to send overpayment notices to tens of thousands of Washingtonians demanding they repay unemployment benefits — in some cases approaching $20,000 or more.

ESD responded by bringing on hundreds of third-party contractors and received assistance from National Guard troops. The agency also hired temporary workers with federal funds and, partly in response to pressure from state legislators and litigation by workers and advocacy groups, began making upgrades to its phone and online systems and its communications. The agency also agreed to suspend collections actions such as garnishments or liens, Demerice said.

ESD has since reported significant improvements. The number of claimants waiting three weeks or longer for payment on a claim was around 500 as of Monday, Demerice said, compared with nearly 25,000 in December 2020. Average hold times at ESD call centers were just under 11 minutes in December, down from nearly 42 minutes in January 2021, according to ESD data.

But some problems have lingered.

When ESD denies a claim and a claimant appeals, the agency is still taking around 35 days to do a secondary review and transmit the appeal to the Office of Administrative Hearings, according to OAH data.

That’s down from nearly 45 days in June 2021, but it’s up around nine days over the 2021 average — and far above the pre-pandemic turnaround of two to three days, OAH data shows.

Some labor and worker advocacy groups wonder whether the agency could lose more ground as it is forced to cut staff just as it embarks on several new initiatives. These include reviewing unemployment claims for a delayed federal pandemic program which will retroactively pay $100 a week for qualifying workers who lost both regular income and self-employment income in the pandemic.

A potentially larger task comes as ESD administers a 2021 federal policy change requiring states to revisit previously denied claims for federal Pandemic Unemployment Assistance, which paid benefits to many contractors, part-timers and others not covered by regular unemployment benefits.

Under the federal policy, some workers can “self-certify” that, for example, they didn’t return to work because of COVID-related workplace safety concerns. Qualifying claimants could retroactively collect denied federal benefits.

ESD officials say they don’t yet know how many claimants may be eligible — although Demerice said ESD is timing the layoffs so as not to undercut the programs.

But labor and worker advocacy groups will be closely watching to see whether ESD actually can absorb those cuts without falling behind again.

“We certainly hope that [ESD] will have the capacity to manage upcoming needs, but I think it’s hard to say at this point what our capacity will be in Washington,” said Sybill Hyppolite, legislative director with Washington State Labor Council and an employee representative on the state Unemployment Insurance Advisory Committee. “I think that we still have to watch and see.”

In the meantime, claimants and advocacy groups say they started to see more overpayment notices in December. Demerice said many of those are related to earlier eligibility questions, while others are generated as claims under appeal are finally resolved by OAH.

Demerice said some overpayment notices can be resolved by calling the agency or by applying for a waiver. In other cases, claimants can arrange payment plans, he said, adding that the agency is still not garnishing claimants’ wages or putting liens on claimants’ property.

Some claimants say that even if the overpayment problems can be resolved, the process is nerve-wracking.

“It’s so stressful,” said Erica, a Seattle-area administrative specialist who received benefits in 2020 and 2021 and got an overpayment notice for around $10,000 in December. She asked not have her full name published to protect her privacy.

Although Erica has filed an appeal and was told by ESD that overpayment notices would be paused until her hearing, she said the challenges of dealing with ESD during the pandemic have made her fearful of any kind of communication from the agency.

“Any time I get a notification from ESD, I get anxiety,” she said. “Because I don’t want to do anything wrong.”

This article has been updated with ESD’s staffing numbers, some of which were not available until Friday morning.