MONTREAL (AP) — Via Rail, Canada’s passenger train service, said Wednesday it is temporarily laying off 1,000 employees due to the continued halt in service on CN Rail’s tracks in eastern Canada caused by railway blockades protesting a British Columbia pipeline.

The government corporation has suspended passenger trains on the Montreal-Toronto and Ottawa-Toronto routes for nearly two weeks due to the protests that have disrupted rail service across the country.

The layoffs come amid growing pressure on Prime Minister Justin Trudeau’s government to take action against the blockades in support of Wet’suwet’en hereditary chiefs who oppose a natural gas pipeline in British Columbia.

“In 42 years of existence, it is the first time that VIA Rail, a public intercity passenger rail service, has to interrupt most of its services across the country,” she said in a statement.

The company has cancelled more than 530 trains since blockades began Feb. 6.

Earlier this week, Canadian National Railway Co. temporarily laid off about 450 workers from its operations in eastern Canada after cancelling more than 400 trains since protests arose.

Trudeau called it an unacceptable situation that needs to be resolved in the weeks and months to come. He has urged patience and warned against using force.

Demonstrators have set up blockades in British Columbia and Ontario in solidarity with opponents of the Coastal GasLink pipeline project that crosses the traditional territory of the Wet’suwet’en First Nation in northwestern British Columbia.

Hereditary chiefs in the Wet’suwet’en First Nation oppose the natural gas pipeline through their traditional territory, though it has received approval from elected band councils.

Fresh blockades went up Wednesday on a CN Rail line in Edmonton and in St. Lambert, south of Montreal — both involving protesters acting in solidarity with the Wet’suwet’en. The Edmonton blockade ended after a few hours, when a group of counter protesters with a truck arrived and began tearing it down.

One Wet’suwet’en hereditary chief said the chiefs won’t meet with the federal government over their opposition to the pipeline until both the Royal Canadian Mounted Police and Coastal GasLink leave their traditional territory.

Na’moks, who also goes by John Ridsdale, said the chiefs have communicated their terms to Carolyn Bennett, the federal minister responsible for government-indigenous relations who has been seeking a meeting with the chiefs.

Alberta Premier Jason Kenney, who has been critical of the blockades, said he expects police to respect and enforce court orders.

“These illegal blockades — there’s people losing their jobs, blue-collar people, vulnerable people,” he said while in Calgary. Alberta. “What is happening here is anarchy.” 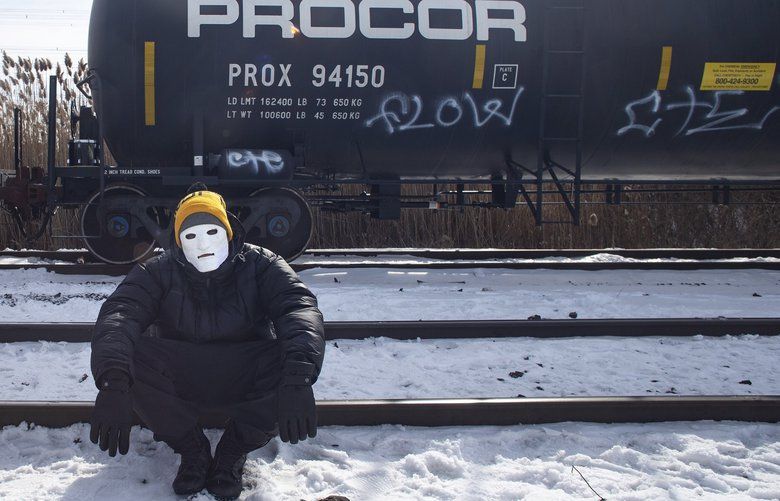 Why protesters are shutting down Canada's rail service
The Associated Press