U.S. entrepreneur James Mault is hanging his hopes on March 1. That’s the day his Chinese manufacturing partner is supposed to reopen and start churning out medical devices after shutting down over the coronavirus.

The engineers are already back to work at the facility in southern China, which makes medical equipment for several Western companies. Hundreds of assembly-line workers are supposed to return on Sunday, Mault said.

“We’re about a month to six weeks delayed in receiving product,” Mault, the founder of Denver-based BioIntelliSense, said, calling that a bearable situation. “But it certainly will impact us dramatically if it goes beyond that.”

The next few weeks will be crunchtime for U.S. companies awaiting products from stalled Chinese factories. If their suppliers spring back to life soon, many companies say they should be able to manage without disastrous disruption. But the uncertainty is keeping managers up at night.

The variables go beyond the number of employees allowed to return to work after weeks of quarantine. Factories will need enough raw materials to restore production, and enough protective masks to keep workers safely in place for the foreseeable future. They’ll also need Chinese truckers and functioning ports to ensure that goods can make it to market.

Unease over the timeline caused stocks to plunge Monday, with major U.S. indexes falling by more than 3 percent. The virus’s continued spread outside China, to countries including Italy and South Korea, has compounded fears over the impact on the global economy.

For many U.S. companies, the coronavirus has exacerbated troubles they were already having manufacturing in China, after the Trump administration last year levied large import tariffs on Chinese-made goods.

The virus is also hitting multinational companies that sell their goods inside China, where mass quarantines have stalled one of the world’s biggest markets. Deere last week said its sales of road-building equipment have softened over the past month as construction has halted in China, which usually makes up 10 to 15 percent of sales.

Fast-food chains and other retailers, including Starbucks, Domino’s Pizza and Lululemon, have closed stores in China or postponed new-store openings. American Axle & Manufacturing, an auto parts maker based in Detroit, said it expects about $25 million in lost sales during February and early March as car manufacturing slumps in China. Tesla, which recently opened a Shanghai factory to build its Model 3 for Chinese customers, said in January that it expected the virus to “slightly impact” profitability.

Even businesses operating far from China expect some distress, though the magnitude is still unclear. “You can’t shut the factories that produce the goods that go on the ships that come to the trains that feed North American appetite for goods down and not have some kind of impact,” Keith Creel, chief executive of Canadian Pacific Railway, told a gathering of investors last week, according to a transcript.

Some nimble U.S. companies have shifted manufacturing out of China to escape the coronavirus shutdown. Azazie, an online bridal retailer headquartered in San Jose normally makes its dresses at 50 factories across China but has moved some of its production to Cambodia and Vietnam in recent weeks.

“I’m going to be honest: It is impacting us,” said Ranu Coleman, Azazie’s head of marketing. “So much of the wedding market requires skillful handwork, and it’s really hard to find that outside of China.” Some Chinese workers have continued to pitch in despite factory closures by doing handwork and beading from home, she said.

But many multinational companies are deeply entrenched in Chinese manufacturing, making their production difficult to move. Apple last week warned that it expects to fall short of revenue goals in the current quarter because of stalled iPhone production in China and lower demand from Chinese consumers.

Mault, the founder of BioIntelliSense, said the start-up considered moving production of its medical devices to another location in Asia, Mexico or the United States. “But the time it would take us to relocate the tools and get a manufacturing line stood up right now, we’re still looking at a much more reliable scenario” to stay put in China, he said.

The company had been planning to start shipping its new product – a battery-powered sensor that monitors patients’ vital signs – to hospitals by the end of March but is now aiming for April or May.

MGA Entertainment, the company behind Bratz and L.O.L. Surprise! dolls, said some of its factories in China are beginning to open but they’re having trouble getting raw materials, from resin and cardboard to steel and doll hair.

The company’s factory in Hudson, Ohio, is running overtime to churn out Little Tikes toys, but chief executive Isaac Larian said the facility only has enough Chinese-supplied raw materials – including wheel axles for toy cars and electronics for play kitchens – to last another month. The company is trying to find U.S. sources for some materials, including steel and resin, he said.

“Every day is crucial and, really, the next two weeks are going to show whether we can turn things around or not this year,” Larian said. “The timing couldn’t be worse. In 41 years in the toy business, this is the worst disaster I’ve seen.”

The hardest-hit manufacturers are in the heart of the coronavirus outbreak, in Hubei province. Cummins, a diesel-engine manufacturer headquartered in Indiana, said its Chinese manufacturing sites outside Hubei province have reopened, but some of its sites in Hubei won’t open until at least March 11.

Cummins and other companies are scrambling to ensure that they have enough masks to protect returning workers. Different provinces have different rules about how many masks factories must provide each worker per day, before they can reopen, said Steve Lamar, chief executive of the American Apparel & Footwear Association.

“There really is a lot of uncertainty,” Lamar said.

The Washington Post’s Faiz Siddiqui and Reed Albergotti contributed to this report. 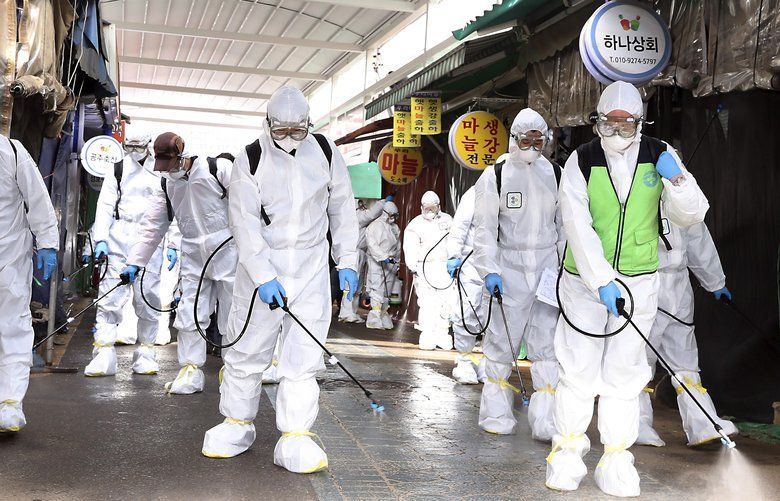