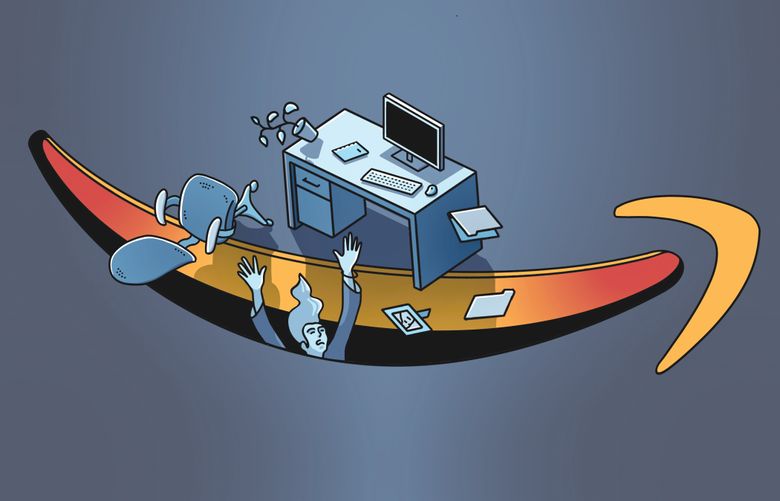 When Leslie Tullis asked to take time off from Amazon, she knew she would get less done.

But she would need the time, space and flexibility to get herself and her two children out of an increasingly abusive household. And, based on a decade-old Washington state law meant to help victims of domestic violence break from abusers, she also knew her employer should protect her job.

When Tullis asked for leave, Amazon answered her with complaints and threats of disciplinary action. One of Washington’s largest employers didn’t seem to have a protocol in place for employees who requested it. Tullis said her managers weren’t aware of the law, and Amazon didn’t list domestic violence leave as an option in its internal system.

After two years of whispered complaints that she was taking “excessive” time off, Tullis was fired. She knew it would end this way when, five days after asking for leave, her manager told her, “I have to stop protecting you.”

Five days is “a really long time at Amazon” to be underperforming, Tullis said. “At Amazon, you’re either ‘one of us’ or not — and that marked my transition from ‘one of us’ to not.”

If you are in immediate danger, call 911. If you have been abused by an intimate partner, you can call the 24-hour National Domestic Violence Hotline at 800-799-7233 or 800-787-3224 (TTY). A variety of agencies in the area offer assistance, including confidential shelters, counseling, child therapy and legal help. For a list of resources, visit the Washington State Coalition Against Domestic Violence’s website.
Advertising

To help victims of domestic violence become survivors, Washington lawmakers passed the Domestic Violence Leave Act in 2008. The law requires employers to provide workers experiencing domestic violence, sexual assault or stalking time off — with few parameters and few questions asked. An employee’s job is protected by law when using this leave, according to the state Department of Labor & Industries, which can include “reasonable amounts” of unpaid leave, beyond available paid time off.

For domestic violence leave, it can take an alleged violation to bring it to a company’s attention. Even then, Phelan said, many employers don’t understand “why it’s their problem.”

“We’re committed to supporting any employee who is currently experiencing domestic violence or who needs ongoing assistance as they grapple with its impact on their lives,” spokesperson Brad Glasser said.

Tullis is accusing Amazon of discrimination and retaliation, and is fighting in court to get her job back. L&I has twice ruled in her favor and levied two $500 fines against Amazon for violating state law.

After the first ruling, an administrative law judge overturned part of the decision, finding Amazon’s actions were “legitimate business decisions.” L&I then ruled again against Amazon. The company appealed that decision in August.

“I can’t just let it go,” she said. “Because of the immense injustice to myself and also the injustice to potentially tens of thousands of other Amazon workers who’ve never heard of this leave.”

Tullis, 41, worked in Amazon’s Kids and Family division, a part of its devices business that includes Alexa, Kindle, Fire tablets and Echo.

As a senior product manager, she embodied Amazon’s “customer obsession” mantra and considered it her job to keep the customer as “the North Star,” envisioning what a product could look like and what standards the company should set. She worked on Amazon Kids Plus, a subscription service that gives kids access to books, games and videos, and helped create the flagship product for Amazon Kids Plus on Android devices.

Tullis knew about Amazon’s reputation as an employer with high expectations before she took the job — but also knew she could meet them. She started her working life as an investment banker and was used to putting in 80-hour weeks. At Amazon, she sometimes forced herself to work long hours so she “didn’t get spoiled.”

In a conversation that she now considers foreshadowing what was to come, Tullis’ manager told her she was there to “fight” for the product, sometimes against the company’s legal or human resources team. If the legal team said “you can’t do that,” she was told to push back, not taking no for an answer.

When she first asked for time off in 2017, Tullis said her managers hadn’t heard of the Domestic Violence Leave Act.

When Tullis logged onto MyHub, a third-party service Amazon used to administer leave, it didn’t list domestic violence leave as an option. She sent several emails to her manager and the human resources department asking for help. It felt like they were pushing her to instead request medical leave, something she knew she wouldn’t qualify for.

In the meantime, she was missing work.

“When you’re experiencing domestic violence, you’ve got somebody in your life that is actively trying to sabotage it and control you,” said Traci Underwood, a former program coordinator with the Washington State Coalition Against Domestic Violence. “Those things show up at work sometimes.”

Survivors experiencing domestic violence may need to take large chunks of time off to relocate — sometimes with kids in tow — or take time intermittently to make court appearances, Underwood said. They may simply show up to work late after their partner didn’t follow through on promised child care. Or their partner might choose to sabotage their car.

Between February and May 2018, Tullis missed 57 of 71 workdays, according to court filings.

“It’s not like they’re going to take the leave once and dust off their hands and be done with it,” Underwood said. “The nature of having somebody who is causing harm in their life is that they keep coming back.”

There’s no way to determine how many people use domestic violence leave in the state, according to Jeff Mayor, a spokesperson for L&I. That’s because there is no requirement to report when workers take this type of leave.

In fiscal year 2020, which runs from July to June, the department received 12 complaints about domestic violence leave. It recorded five complaints in 2021 and six in 2022.

At Amazon, Tullis said she was threatened with disciplinary action after asking for leave. Her manager emailed the HR department to ask when he was able to “start actively performance managing someone” during protected leave, according to documents from the Department of Labor. Amazon’s employee relations adviser wrote to a colleague that Tullis’ leave was “excessive.”

Eventually, they asked her to submit records of what she did with every minute of her time. She did, including every bathroom break.

“I would have done anything to keep that job,” Tullis said.

About six months after she first asked for time off, Amazon moved Tullis into its performance management program, a system notorious for signaling that an employee is soon headed out the door. A year and a half after that, she was fired.

Amazon has been criticized for problems with its leave policies in the past, including those for new parents, workers facing medical crises and safety concerns for warehouse workers during the most intense periods of pandemic-related restrictions.

The company acknowledged “pain points” in its leave program in a 2021 New York Times article that included Tullis’ story. Amazon at that time committed to hiring hundreds of employees, streamlining its systems, clarifying its communications and training human resources staff members to be more empathetic.

Almost a year since that story, Glasser, the Amazon spokesperson, says it has made those changes.

It has dozens of engineers dedicated solely to its disability and leave services systems. It invested in a contact center where about 90% of inquiries are answered within 30 seconds. And it simplified the application and approval process for leave requests, cutting the time from submission to decision by more than half.

Amazon did not comment on how long it takes, on average, for an employee to go through the entire process to request and receive leave.

“We work hard to support employees who need time away from work or accommodations in doing their jobs,” Glasser said. “Internal survey data tells us that employees are more satisfied with these processes than ever before, and we’re planning to keep enhancing our tools and systems in months and years ahead.”

In the company’s system to request leave, employees have the option to select “planning for safety as a victim of crime or domestic violence.” That selection will automatically assign a specially trained case manager. In Washington, the case manager approves the request — without requiring any supporting documents — within two days.

Back in 2017, Tullis said, those accommodations weren’t an option.

Her use of leave was a “substantial motivating factor” in the decision to place her on a performance management plan, deny her a transfer to a different position within the company and, ultimately, terminate her employment, L&I ruled. Amazon had “demonstrated hostility” toward her time off.

Tullis was “lawfully terminated for legitimate, non-retaliatory performance reasons that were not caused by her use of domestic violence leave,” Amazon wrote in its filing.

Amazon first placed Tullis on its “development list,” a performance management program that prevents employees from moving to different roles within the company. That program has been replaced with a new one, Focus, but both required managers to keep the details mostly secretive, even from the employees who were in it.

The company has been accused of using its performance management system to get rid of employees, partly as a way to cull its workforce by a certain number each year. Amazon said last year it expects more than one-third of employees in Focus will fail.

When Tullis was later moved to Pivot — the next, more formal step in the performance management process — she was given the option to resign or be placed on a performance improvement plan, which sets expectations and deadlines for workers. She opted to keep working but asked for flexibility in the deadlines.

Four months later, her manager determined Tullis had failed the program and she lost her job.

Before walking out the door, Tullis had the chance to appeal her termination to a panel of her peers.

After her manager made a case for why she was terminated, Tullis was able to tell her side of the story — but Amazon forced her to redact most of the information in documents she had planned to submit as evidence.

Amazon says its appeal process is focused on determining whether an employee met the goals and timelines of their performance improvement plan. If supporting documentation is not related to those topics, it won’t be considered in the appeal.

Now, Tullis is asking the court to compel Amazon to reinstate her.

She’s keeping up the fight with her future co-workers in mind.

She doesn’t have the luxury of a breakdown, she likes to tell her attorney and other people who ask how she is holding up. She has kids relying on her, debt to pay off and tens of thousands of Amazon employees to educate about this type of leave.

“Every time I look at what they did through the lens of some old filings … it just reinforces my belief that what I went through cannot be for nothing,” Tullis said. “And in many ways, I can’t begin to heal until something is resolved.”