Hundreds of people lined the banks of Glasgow’s River Clyde a few weeks ago for the rare sight of a small, high-end cruise ship sailing upriver — practically into the heart of the city. The Azamara Journey thrilled socially distanced onlookers by blasting its horn, typically a heralding of lively celebration.

But this time nobody was there to wave on the deck of the 700-passenger ship, aside from the couple dozen members of its skeleton crew. This was no celebratory arrival, after all: It was a vessel on life support, just like every other ship dealing with the pandemic’s brutal wake.

Since mid-March, only a small handful of the world’s 400-or-so cruise ships have been able to accept passengers — all on hyperlocal itineraries. A few dozen are sailing the world with purpose, repatriating crew members from every corner of the globe.

The rest are sitting idle in cruise ship purgatory, unable to sail commercially for the foreseeable future. (In the U.S., the industry has agreed not to resume business at least until Sept. 15. Princess Cruises, Holland America Lines and Carnival Cruises in May canceled their remaining Alaska cruises from Seattle for the season. )

The problem for many cruise lines? Idling through the pandemic isn’t just bad for the company’s bottom line, it’s a potential death warrant for their costliest assets: the ships themselves. From mechanical issues to hurricane risks to regulatory hurdles that can constitute criminal offenses, it’s a quagmire that the industry has never faced on this scale before. 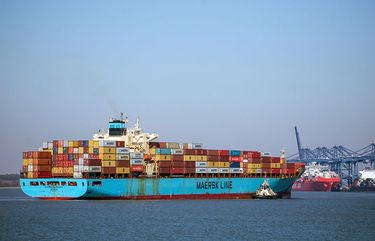 200,000 seafarers fear there’s no plan to get them off ships
Advertising

The expense is staggering. In a recent SEC filing, Carnival — whose nine brands comprise the world’s largest cruise company — indicated that its ongoing ship and administrations expenses would amount to $250 million a month once all its ships are on pause. With the company saying it’s unable to predict when cruises resume, that’s a long-term line item on a balance sheet that logged $4.4 billion in losses in the second quarter alone.

As with airplanes, the first issue with maintaining an idle cruise ship is simply finding a place to park it. As many as 16,000 planes have been grounded in the pandemic, hiding out in dry and rust-proof places that range from hangars and airport tarmacs to desert boneyards. Ships are similarly scrambling to find the right conditions to weather the storm.

There’s not enough port space for every ship to dock at once, especially for huge ships that ordinarily carry up to 8,880 passengers and crew. This explains the celebratory sounds of the Azamara Journey’s “homecoming” in Glasgow (it docked at a cargo port rather than its usual cruise berth further outside the city). Less lucky vessels have had no choice but to drop anchor at sea, occasionally stopping into the nearest port for provisions and fuel.

This past week, a cluster of 15 ships from Carnival Cruise Line, Royal Caribbean, and Celebrity Cruises was hanging out near the Bahamas, according to Cruisemapper.com, a ship-tracking site. The 6,680-passenger Symphony of the Seas, the largest cruise ship in the world, was off the Dominican Republic.

According to Bill Burke, a retired U.S. Navy vice admiral and Carnival’s chief maritime officer, getting the company’s 105 ships to their pause destinations —20 in the Caribbean, 40 in Europe, 35 in Asia, and 10 in the eastern Pacific — is a process that will stretch into the third quarter of the year.

Parking is just the first pain point. To keep things shipshape and avoid costly repairs (much like how your battery might die if you leave your car sitting too long), the vessels must also be kept operating.

“Modern cruise ships are not designed or built to just be turned off and left at a pier,” says Monty Mathisen, managing editor of Cruise Industry News. “You are talking about massive amounts of machinery, electronics, and even steel that needs maintenance, checking, and preventative work.”

That mostly involves one of two scenarios, referred to in the industry as “warm” or “cold” layup.

In warm layup, most systems are kept functioning; in cold layup more are shut down, such as ballast tanks, turbines, and gear boxes. Cold layups come with extra precautions, too, such as sealing off external doors and windows, moving linens to a dry place, putting mattresses on edge, opening all dresser drawers and closets, and sealing bathroom fixtures, to name a few.

An advantage to warm layup is ships can quickly be put back into operation. Once the word comes down, Burke says, the ship can resume carrying guests within weeks — though it will still need to get a full crew onboard and sail to the appropriate destination.

But warm layup requires more upkeep, and therefore more staff. Each ship has a “safe manning” team — about 120 crew members for a large ship. Among the necessary personnel, according to Carnival’s Burke: a deck crew to drive the ship, an engineering crew to run the electrical power and propulsion, a medical team to tend to staff needs (particularly in the time of COVID-19), security, and enough housekeeping and kitchen staff to keep everyone looked after and fed.

In the event of hurricanes or other bad weather, the ships have to be able to move. They also have to comply with environmental, safety, and other regulations or risk stiff fines, criminal charges, and other penalties, says Burke. In 2016, for example, Carnival received a five-year probation and a $40 million fine on a criminal pollution conviction.

But there’s a time limit on this half-on strategy: According to shipping analysts at maritime intelligence company Lloyd’s List, warm layup is only appropriate in the short term. After as little as six months, ships may lose certain certifications that allow them to sail legally.

A ship out of water

Cold layups require fewer systems to run, and therefore, as little as 40 crew members: a bridge team, engine room operators, fire wardens, and hotel staff. But grinding operations to a near-halt makes it more difficult and expensive to restart. According to Lloyd’s Register’s layup guide, every corner of a ship, from the pump room to the living quarters, needs to be inspected for things like gas leaks and mold; electrical equipment, including the navigation systems, need to be removed from safe storage and reinstalled; and dehumidifiers all need to be removed before furniture and soft goods can be cleaned and put back in place. That’s why cold layups are seen as advantageous only in the event of an outage stretching to many months.

Burke says Carnival could move in this direction in the long term. According to Mathisen, Royal Caribbean has already committed to this tack. Its fleet is largely being protected by dehumidifiers—deployed everywhere from engine rooms to public areas.

When they’re ready to set sail again, the restart “can take weeks to months,” he explains, detailing delays that range from transporting crew back to the ship, going through bureaucratic recertification processes, or even financing expensive dry dock repairs.

A more drastic option is tying up the ship, shutting down all systems, leaving only some emergency generators running and a few fire safety crew and watchmen on duty. Cruise historian and writer Peter Knego paints a grim picture of what can happen in that scenario.

“The first thing that goes is the plumbing,” Knego says. “If you don’t have the plumbing active and somebody’s actually flushing toilets and running water through the system, rust sets in, the pipe starts to disintegrate, and then you have major problems.”

HVAC systems and wiring are next to go. “And then just the fact they are laid up in salt water, salt air, decaying everything very quickly,” Knego explains. “You literally have to tear the infrastructure to make repairs if a ship has been idle for too long.” With long-term layups, issues like rot start to crop up.

If that sounds like a slow and painful death, some companies are just ripping off the Band-Aid instead. In its second-quarter financial filing, Carnival said it plans to retire at least six older ships, which could potentially be sold another cruise company or for scrap — usually for anyone’s best offer. Costa Cruises brand’s 24-year-old Costa Victoria is reportedly destined for a scrapyard. A ship out of water is, alas, worth less than the sum of its parts.

For more articles like this, please visit us at bloomberg.com