For the first time in two decades, the U.S. dollar is equal to the euro in value as Europe grapples with growing recession fears and the fallout from Russia’s war in Ukraine.

The euro matching or dipping below the dollar presents a mostly psychological milestone, some experts say, but central banks and policymakers across the euro zone are likely to face pressure to address depreciation concerns.

The stronger dollar is good news for Americans considering a European vacation or buying goods abroad. Conversely, traveling and spending with U.S. dollars have now become pricier for those who earn wages in euros.

Related More on the Economy 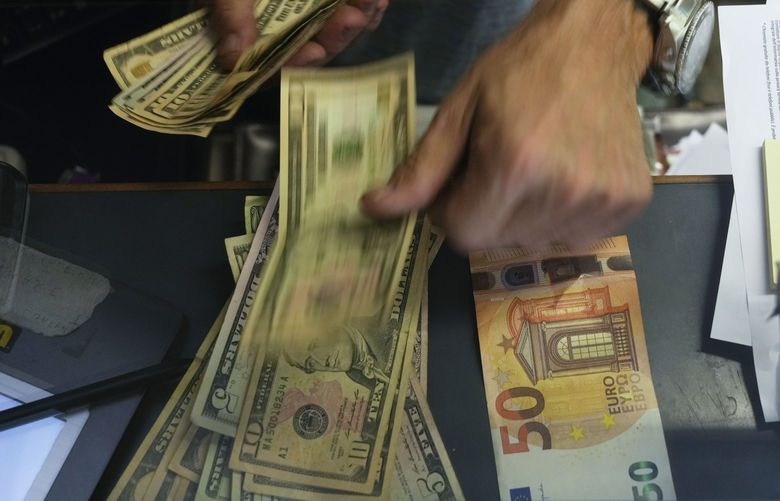 The euro has been losing ground against the dollar since the start of the year when it hovered near $1.13, well off its peak of nearly $1.60 in 2008. Live currency data reported by MarketWatch shows the euro slipping just a few hundredths of a cent above the dollar, while Bloomberg and Reuters reported that the euro briefly slipped below a dollar in value.

Analysts say the sinking value of the euro reflects growing risk aversion on the part of investors, who are pouring into dollars — considered a “safe haven” asset compared with other currencies — amid concerns about inflation, the war in Ukraine, and recession fears in numerous countries.

Currency markets got a jolt Wednesday morning when the U.S. Bureau of Labor Statistics reported that U.S. prices soared by 9.1% in June compared with a year ago, a new peak with inflation running at 40-year highs.

The common currency in 19 European Union member countries has weakened during the monthslong war in Ukraine, which has sent shock waves through global food and energy markets. The European Central Bank also lags behind peer institutions such as the Federal Reserve in tackling rising inflation, which swelled to 8.6% last month — the highest level since the euro was created in 1999.

The Fed has been aggressively raising interest rates to stem inflation woes, having announced three rounds of increases this year alone, and has signaled that four more scheduled rate hikes are in the works. Although the European Central Bank is also expected to raise rates to bring inflation back to a 2% target, it is likely to move at a slower pace: It has penciled in a 0.25 percentage point rate hike for July, while the Fed is widely expected go with a 0.75 percentage point increase, as it did in June.

European businesses that sell their wares abroad might find that the weaker currency makes their exports more appealing, because the buyer’s currency will be more valuable by comparison. American companies, on the other hand, could face a tougher time exporting their goods abroad.

But more important, some experts argue that a less-potent euro portends slower economic growth for Europe.

“It’s becoming increasingly clear that the Euro zone is heading into recession, even as financial conditions have tightened more than in the US or Japan,” tweeted Robin Brooks, chief economist at the Institute of International Finance.

After the war in Ukraine began, the Economist Intelligence Unit revised its 2022 eurozone growth forecast downward from 4% to 2%. It predicts a 1.6% growth rate for 2023. And the euro’s weakness “reflects fears from investors of an impending recession in the euro zone,” said EIU global forecasting director Agathe Demarais.