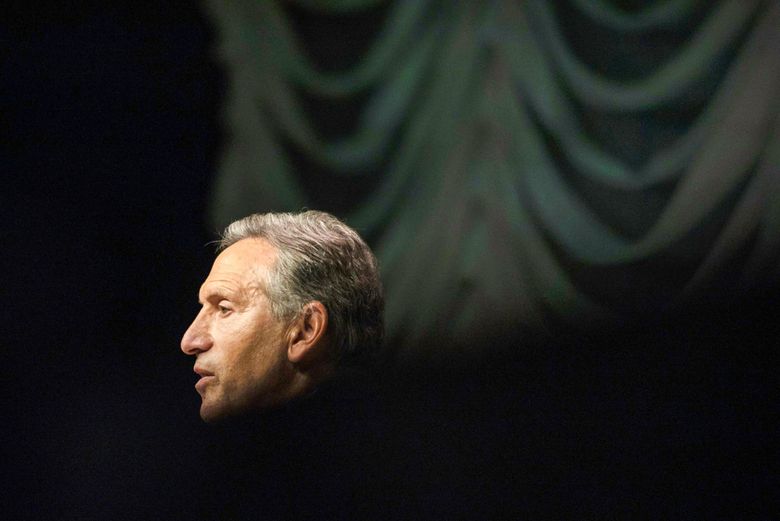 The state of Starbucks: Sustainability, union drives and the return of Howard Schultz

Howard Schultz is set to begin his third stint as CEO for Starbucks as the company looks to replace Kevin Johnson, who announced his retirement Wednesday. (Callaghan O’Hare / Bloomberg)
By
Lauren Rosenblatt
Seattle Times Amazon reporter

Former — and future — Starbucks CEO Howard Schultz is taking on a company that is changing.

Starbucks president and CEO Kevin Johnson is stepping down in April, after 13 years with the company and five at the helm, Starbucks announced Wednesday ahead of its annual shareholders meeting. Schultz, the former Seattle Sonics owner and presidential hopeful who has led Starbucks as it became a multibillion dollar global brand, will act as interim chief executive officer until a successor is named this fall.

The leadership transition comes as the company looks to hit a lengthy list of inclusivity, accessibility and sustainability milestones by 2030. At the same time, employees are demanding better working conditions and pay, and are increasingly forming unions to get them. And some shareholders are pushing the company in their own way, asking Starbucks to remain neutral toward union drives and requesting a report on how it prevents harassment and discrimination in the workplace.

Starbucks began preparing for the CEO change last year, board chair Mellody Hobson said Wednesday. Having led the company as CEO from 1987 to 2000 and from 2008 to 2017, Schultz’s past experience leading the coffee giant makes him “singularly qualified” to serve as CEO for this transition period, she said.

“Howard’s return at this inflection point in the world and our own company’s history is not back to the past but back to the future,” Hobson said. “As we pilot the aftermath of the pandemic and the socioeconomic factors impacting the lives of our stakeholders, who better to re-enforce its culture than its creator?”

Johnson told the board of directors a year ago he was considering retirement as the “global pandemic neared an end,” he said in a statement Wednesday.

The board has been working on CEO succession planning with executive search and leadership advisory firm Russell Reynolds Associates and formed a working committee to oversee the CEO search process.

“I feel this is a natural bookend to my 13 years with the company,” Johnson said. “As I make this transition, we are very fortunate to have a founder who is able to step in on an interim basis, giving the board time to further explore potential candidates and make the right long-term succession decision for the company.

“I have enjoyed every minute of the job and am proud of what we have achieved together,” he continued. “It has been an honor to serve the 400,000 Starbucks green-apron partners around the world.”

Before joining Starbucks’ board of directors in 2009, Johnson worked for IBM’s systems integration and consulting business, spent 16 years at Microsoft and served as CEO of Juniper Networks, a Sunnyvale, California, company that develops and markets networking technology.

Johnson, 61, left Juniper Networks to focus on his health but came out of retirement at the request of Schultz himself, said Reggie Borges, director of corporate communications at Starbucks.

After 32 years working in tech, Johnson told shareholders he didn’t know yet about retail, coffee or “the true meaning of being a Starbucks partner,” but knew he had a responsibility to “boldly reimagine the future.”

He joined Starbucks’ leadership team in 2015 as president and chief operating officer, and was named CEO in 2017.

“Kevin and the entire executive team stepped up to the challenge of the pandemic and navigated one of the most difficult periods in modern history,” Hobson said in a statement Wednesday. “The economic certainty provided to partners during the early months of the COVID shut down, as well as during mandatory quarantines, underscores our core values and will be an enduring legacy for the company.”

Johnson will stay on as a Starbucks employee and special consultant to the company and board of directors through September. He will receive 50% of his salary through that time, Borges said. In 2020 and 2021, Johnson’s base pay was $1,550,000, according to company filings with the Securities and Exchange Commission.

Starbucks is considering both internal and external candidates for the role, Borges said.

In his time as interim CEO, Schultz will receive $1 of compensation.

“When you love something, you have a deep sense of responsibility to help when called,” Schultz, 68, said in a statement Wednesday. “Although I did not plan to return to Starbucks, I know the company must transform once again to meet a new and exciting future where all of our stakeholders mutually flourish.”

Schultz, then an aspiring coffee entrepreneur, bought Starbucks in 1987 when it was a small chain of coffee shops. He took the company public in 1992 and led it to global prominence, and, at times, dominance.

A celebrity CEO, Schultz has penned four books on coffee, leadership and politics, and was seriously considering a presidential run in 2020 before pulling back due to a health issue. For Seattle NBA fans, his reputation is colored by his decision to sell the Sonics to an Oklahoma ownership group, which moved the re-christened Oklahoma City Thunder in 2008.

In the midst of the leadership change, Starbucks has committed to making changes to its practices in the next eight years, laying out a lengthy list of pledges to accomplish by 2030, including:

“While our goal is to enhance the well-being of 1 billion people who connect with Starbucks in some way, it starts with one partner, one cup and one neighborhood at a time,” said Virginia Tenpenny, the chief global social impact officer.

Earlier this week, Starbucks said it would expand its commitment to inclusivity with accessible store designs and new locations in communities positioned to benefit from a new coffee joint and the local jobs it would create.

The company also announced an initiative to shift away from single-use cups and plans to build on its Borrow-A-Cup program, a pilot it launched in Seattle to help customers move toward reusable cup options.

Starbucks also launched a pilot program Tuesday that would set up electric-vehicle charging stations at Starbucks stores along an 1,350-mile route between Seattle and Denver.

To help its workers, Starbucks said it has increased hourly pay 17% over the last 18 months. By this summer, starting wages will range from $15 to $23 an hour.

Employees in an apprenticeship program in the United Kingdom can access home loans through a Starbucks program, while those in China can benefit from a monthly housing subsidy, Tenpenny said.

Board chair Hobson and many Starbucks executives told shareholders Wednesday that the people making coffee, heating up pastries and taking orders were crucial to making its stores welcoming and inclusive for customers. Executive vice president Rossann Williams said “our partners inspired the best ideas to lead through the pandemic. We did that by actively listening, learning and working together.”

But at stores across the U.S., employees are turning to union drives with an intensity never seen before at Starbucks to demand better working conditions from the company. Workers at roughly 120 Starbucks stores, including several in Seattle, have filed petitions with the National Labor Relations Board to unionize. Six have voted to approve a union.

And they say the company is putting up roadblocks.

On Tuesday, the NLRB issued a complaint against Starbucks over accusations it retaliated against employees seeking to unionize their store in Phoenix. The next day, a group of investors sent a letter asking the company to “publicly commit to a global policy of neutrality and swiftly reach fair and timely collective bargains” with workers who vote to unionize.

In response to the letter, Hobson said “neutrality, in its nuanced form, limits our ability to speak to our partners in certain ways, and that goes directly against the DNA of the company.”

Starbucks recognizes the right for workers to unionize and is negotiating in good faith, she said, adding “we are working hard to make sure we hear the concerns that are out there.”

The change in leadership is not connected to unionization efforts, said Borges, the corporate communications spokesperson.

But Starbucks Workers United is already calling on the new CEO to “put union-busting behind him and embrace Starbucks’ unionized future.”

Shareholders voted down a proposal Wednesday that would require the company to produce an annual public report outlining its efforts to prevent harassment and discrimination at the company.

The proposal, introduced by New York’s Office of the State Comptroller, asked for a report that would include, among other things, a public accounting of the number and cost of claims of sexual abuse, harassment or discrimination settled by the company.

That data would be helpful for shareholders because harassment and discrimination can result in “substantial costs to companies,” said Gianna McCarthy, director of corporate governance for the comptroller’s office. Those costs could come in the form of increased high employee turnover, absenteeism and legal costs, and make it difficult to attract new hires.

Responding to similar pressure from its shareholders, Microsoft announced in January it would release a report detailing harassment and discrimination complaints and investigations at its company, as well as a benchmark of how its own policies compared to other companies.

The report follows a shareholder directive passed last year in light of claims of sexual harassment, including allegations that Bill Gates sought inappropriate relationships with employees.

At Starbucks, the board of directors advised shareholders ahead of the meeting to vote against the proposal, saying it was not necessary.

“To be clear, harassment, discrimination and retaliation has no place at Starbucks,” said Rachel Ruggeri, executive vice president and chief financial officer. “This shareholder proposal suggests that very detailed public reporting on the resolution of workplace concerns might prevent harassment and discrimination in the workplace. We disagree with that.”

A preliminary count of votes cast Wednesday showed the proposal did not pass.

Also on Wednesday, Starbucks committed to returning $20 billion to shareholders by 2025, adding to the $25 billion returned over the last four years.

“While our growth this year will not be linear, we are confident our approach supports a profit-positive company today and over the long term,” Ruggeri said. “Creating value for all stakeholders, our partners, our customers, and our shareholders.”