Skip to content
By
David Segal
The New York Times

ROTTERDAM, Netherlands — The image would have been a social media phenomenon: a few thousand citizens of the Netherlands’ second largest city, standing beside a river and hurling eggs at the gleaming, new 417-foot sailing yacht built for Jeff Bezos, Amazon’s founder and one of the world’s richest men. By the time the boat passed the crowd, it would have been spattered with bright orange yolk, plus at least one very bright spot of red.

“I would have thrown a tomato,” said Stefan Lewis, a former City Council member. “I eat mostly vegan.”

One recent afternoon, Lewis was standing near the Hef, as the Koningshaven Bridge is affectionately known, and explaining the anger that Bezos and Oceanco, the maker of the three-masted, $500 million schooner, inspired after making what may have sounded like a fairly benign request. The company asked the local government to briefly dismantle the elevated middle span of the Hef, which is 230 feet tall at its highest point, allowing the vessel to sail down the King’s Harbor channel and out to sea. The whole process would have taken a day or two and Oceanco would have covered the costs.

Also worth noting: The bridge, a lattice of moss-green steel in the shape of a hulking “H,” is not actually used by anyone. It served as a railroad bridge for decades until it was replaced by a tunnel and decommissioned in the early 1990s. It’s been idle ever since.

In sum, the operation would have been fast, free and disrupted nothing. So why the fuss?

“There’s a principle at stake,” said Lewis, a tall, bearded 37-year-old who was leaning against his bike and toggling during an interview between wry humor and indignation. He then framed the principle with a series of questions. “What can you buy if you have unlimited cash? Can you bend every rule? Can you take apart monuments?”

In late June, the city’s vice mayor reported that Oceanco had withdrawn its request to dismantle the Hef, a retreat that was portrayed as a victory of the masses over a billionaire, though it was much more than that. It was an opportunity to see Dutch and American values in a fiery, head-on collision. The more you know about the Netherlands — with its preference for modesty over extravagance, for the community over the individual, for fitting in rather than standing out — the more it seems as though this kerfuffle was scripted by someone whose goal was to drive people here out of their minds.

Related More on the Maritime Industry 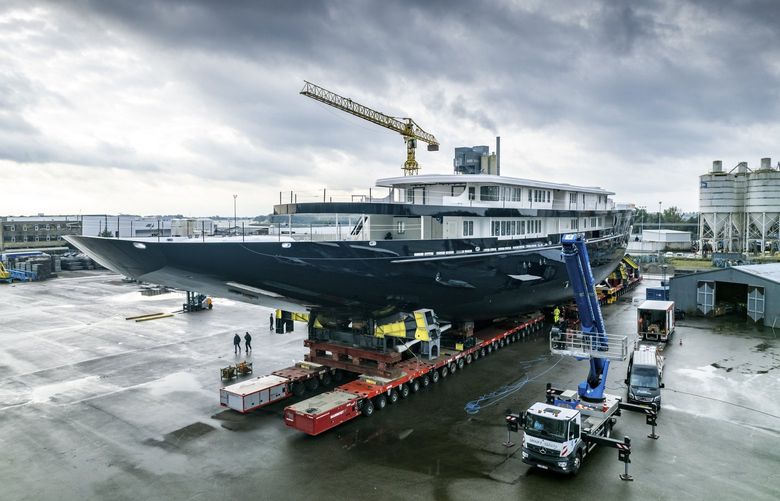 The first problem was the astounding wealth of Bezos.

“The Dutch like to say, ‘Acting normal is crazy enough,’” said Ellen Verkoelen, a City Council member and Rotterdam leader of the 50Plus Party, which works on behalf of pensioners. “And we think that rich people are not acting normal. Here in Holland, we don’t believe that everybody can be rich the way people do in America, where the sky is the limit. We think ‘Be average.’ That’s good enough.”

Verkoelen was among those who considered Oceanco’s request a reasonable concession to a company in a highly competitive industry. But she heard from dozens of infuriated voters, all of them adamantly opposed. She understood the origins of the fervor, which she illustrated with a story from her childhood.

“When I was about 11 years old, we had an American boy stay with us for a week, an exchange student,” she recalled. “And my mother told him, just make your own sandwich like you do in America. Instead of putting one sausage on his bread, he put on five. My mother was too polite to say anything to him, but to me she said in Dutch, ‘We will never eat like that in this house.’”

At school, Verkoelen learned from friends that the American children in their homes all ate the same way. They were stunned and a little jealous. At the time, it was said in the Netherlands that putting both butter and cheese on your bread was “the devil’s sandwich.” Choose one, went the thinking. You don’t need both.

Building the Earth’s biggest sailing yacht and taking apart a city’s beloved landmark? That’s the devil’s all-you-can-eat buffet. The streak of austerity in Dutch culture can be traced to Calvinism, say residents, the most popular religious branch of Protestantism here for hundreds of years. It emphasizes virtues like self-discipline, frugality and conscientiousness. Polls suggest that most people in the Netherlands today are not churchgoers, but the norms are embedded, as evidenced by Dutch attitudes toward wealth.

“Calvin teaches that you’re given stewardship over your money, that you have a responsibility to take care of it, which means giving lots of it away, being generous to others,” said James Kennedy, a professor of modern Dutch history at Utrecht University. “Work is a divine calling for which you will be held accountable. It’s considered bad for society and bad for your soul if you spend in ostentatious ways.”

There are billionaires in the Netherlands and a huge pay gap between CEOs and employees. Statista, a research firm, reported that for every dollar earned by an average worker, CEOs earned $171. (The figure is $265 in the United States, the widest gap of any country.) The difference is that the rich in the Netherlands don’t flaunt it, just as the powerful don’t highlight their cachet. The Dutch once ran one of the world’s largest empires, but there’s a certain pride here that the prime minister of the country rides a bicycle to pay visits to the king — yes, the Netherlands has a royal family, which is also relatively low-key — and locks the bicycle outside the palace.

There’s a premium on equality that has survived the country’s struggles to assimilate immigrants and a gentrification boom that is pricing the middle- and working-class out of cities. An ethos endures that nobody is any better than anyone else, or deserves more, and it stems from an unignorable geographic fact. Roughly one-third of the Netherlands is below sea level and citizens for centuries have had little choice but to band together to create an infrastructure of dikes and drainage systems to remain alive.

“The Netherlands is built on cooperation,” said Paul van de Laar, a professor of history at Erasmus University. “There were constant threats of disaster from the 15th and 16th century. Protestants and Catholics knew that to survive, they could not quarrel too much.”

Chip in. Blend in. Help others. These are among the highest ideals of the Netherlands. Does this sound like a country eager to cut some slack to a man with $140 billion and a $500 million boat? It didn’t help that Dutch critics of Bezos believe that employees at Amazon are underpaid, which, given his fortune, strikes them as not just grotesquely unfair but immoral. “He doesn’t pay his taxes,” is a common refrain in this city, and it doesn’t mean that Bezos is considered a tax cheat. It means that he isn’t fighting inequality by sharing his money, an obligation that transcends the tax code.

(Emails to Amazon were not returned. Bezos did not respond to a ProPublica article last year, based on leaked IRS files, that showed he paid a tiny percent of his fortune in federal income taxes, using perfectly legal methods.)

The Rotterdam vs. Bezos brawl first made international headlines in February, when news broke that Oceanco had been granted city approval to briefly take apart the middle of the Hef. (The cost of this operation was never made public.) The assent had come from a civil servant who apparently didn’t see the harm. An uproar ensued.

“I thought it was a joke,” said Lewis, who learned about the permission on Facebook from incredulous friends. “So I called the vice mayor’s office and asked, ‘Is this for real?’ And they said, ‘We don’t know anything about this.’ It wasn’t on their radar. It took them a day to get back to me.”

When word of the accommodation reached the public, fuming residents became a staple of local TV news and a Facebook group formed to organize that mass egg pelting. (“Dismantling the Hef for Jeff Bezos’ latest toy? Come throw eggs…”) One aggrieved council member soon likened the masts of the yacht to a giant middle finger, pointed at the city.

Oceanco, which employs more than 300 people, has not spoken publicly about its decision to rescind its Hef request and did not respond to an email for comment. News reports stated that the company was concerned about threats against employees and about vandalism.

It’s unclear how the yacht, now known as Y721, will be completed. In February, the City Council’s municipality liaison, Marcel Walravens, was quoted in the media saying that it was impractical to float the mast-less yacht to another location and finish it there.

To van de Laar, the real villain in this tale is not Oceanco or Bezos, who probably had never heard of the Hef. It’s the City Council, which completely misunderstood the depth of feelings about the bridge and bungled the messaging about its decision.

“Emotions are important,” he said. “The council didn’t grasp that, which is incredibly stupid.” The issue wasn’t just this particular billionaire and this particular yacht. It was this particular bridge. To outsiders, the Hef looks like an ungainly industrial workhorse that no longer works.

That’s not what locals see. When opened in 1927 it was considered an architectural marvel, one celebrated by Dutch documentarian Joris Ivens, in his 1928 film “The Bridge.”

“There are poems about the Hef,” said Arij De Boode, co-author of “The Hef: Biography of a Railroad Bridge.” “Anyone who makes a movie about Rotterdam includes the Hef. It’s more than a bridge.”

Rotterdam is one of the few European cities in which nearly all the buildings, both commercial and residential, are new because the place was bombed to devastating effect by the Nazis in World War II. It turned this into a city of the future, always looking ahead, tearing down whatever doesn’t work or isn’t needed.

Except for the Hef. It has become the city’s most recognizable landmark. After the war, it became a symbol of resilience and to locals of an older generation, the Hef is a rare link to the past.

When there was talk decades ago of tearing it down, residents protested. It was declared a national monument in 2000 and underwent a three-year restoration that ended in 2017. Today, the Hef stands as a triumph of function over form that no longer functions, a monolith that can’t be altered, even temporarily — no matter who asks, no matter the price.