Skip to content
By
LINDSAY WHITEHURST
The Associated Press

SALT LAKE CITY (AP) — With the governor of Texas leading the charge, conservative Republicans in several states are moving to block or undercut President Joe Biden’s COVID-19 vaccine mandates for private employers before the regulations are even issued.

The growing battle over what some see as overreach by the federal government is firing up a segment of the Republican Party base, even though many large employers have already decided on their own to require their workers to get the shot.

The dustup will almost certainly end up in court since GOP attorneys general in nearly half of the states have vowed to sue once the rule is unveiled.

The courts have long upheld vaccine mandates, and the Constitution gives the federal government the upper hand over the states, but with the details still unannounced and more conservative judges on the bench, the outcome isn’t entirely clear.

On Monday, Texas Gov. Greg Abbott issued an executive order barring private companies or any other entity from requiring vaccines. It was perhaps the most direct challenge yet to Biden’s announcement a month ago that workers at private companies with more than 100 employees would have to get vaccinated or tested weekly for the coronavirus.

“No entity in Texas can compel receipt of a COVID-19 vaccine by any individual … who objects to such vaccination,” Abbott wrote in his order.

White House officials brushed off Abbott’s order, saying the question of whether state law could supersede federal was settled 160 years ago during the Civil War. They said the Biden administration will push through the opposition and put the private workplace mandate into effect along with others it ordered for federal contractors and employees at health care facilities that receive Medicare or Medicaid reimbursements. All told, those mandates could affect up to 100 million Americans. 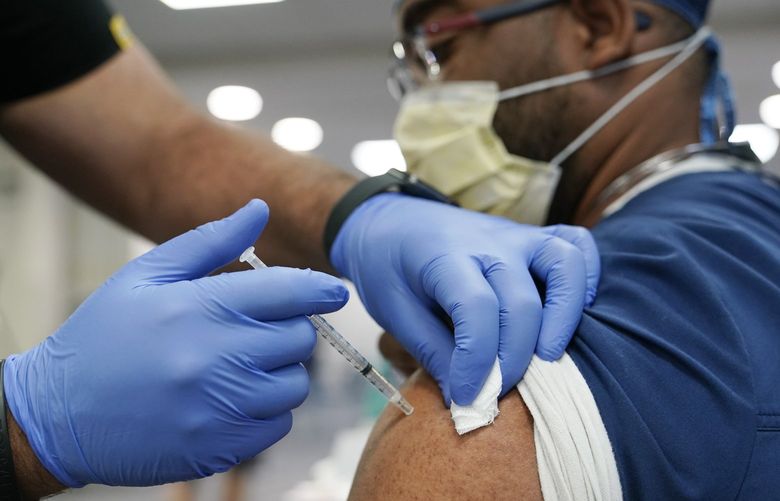 “I think it’s pretty clear when you make a choice that’s against all public health information and data out there, that it’s not based on what is in the interests of the people you are governing. It is perhaps in the interest of your own politics,” she said.

Several large companies in Texas have already implemented their own vaccine mandates, and two Texas-based airlines, Southwest and American, indicated Tuesday they would follow the order of the Biden administration, saying federal action supersedes any state mandate or law.

Elsewhere, lawmakers in Arkansas have approved a measure creating vaccine-mandate exemptions. Though the GOP governor hasn’t said whether he will sign it, it has prompted fears that businesses will be forced to choose whether to break federal or state law.

“We are tying the hands of Arkansas businesses that want to make their own decision in how best to keep their people safe,” said Randy Zook, president of the Arkansas Chamber of Commerce. Some of the state’s largest companies, including Walmart and Tyson Foods, have required some or all employees to get vaccinated.

Calls for special legislative sessions to counter vaccine mandates have been heard in states such as Wyoming, Kansas and South Dakota, where Republican Gov. Kristi Noem is so far resisting calls to immediately consider a bill that would guarantee people could opt out.

“I hear from people almost daily who are going to lose their jobs, are living in fear,” said Republican state Rep. Scott Odenbach, who has clashed with Noem on the issue. “They shouldn’t have to choose between feeding their family and their own medical freedom.”

In Indiana, Republican Gov. Eric Holcomb is also resisting a push from within his party to ban workplace vaccine mandates.

Bills are being introduced or drafted elsewhere, too, including Ohio and New Hampshire, where the Republican sponsor was elected House speaker after his predecessor died of COVID-19.

“We have made it clear that government mandates are not the path to successful vaccination rates and will only cause further division in this country,” Speaker Sherm Packard said last month.

In Utah, lawmakers have not taken action, but a crowd of over 600 people packed a legislative hearing room last week.

Rob Moore, CEO of Salt Lake City-based Big-D Construction, said he supports vaccines but has questions about the mandate rollout. He already has a worker shortage on his job sites, and he said employee surveys tell him that nearly 20% of his workers don’t want to get inoculated, so they would need to be tested weekly.

“That’s heavy on our mind right now. I don’t know if the federal government has thought through that all that well. The cost is going to be enormous,” he said.

In other sectors, vaccine requirements have gone smoothly. In Utah, the NBA’s Jazz is making its employees get vaccinated. It is also requiring fans at games to show proof of vaccination or a negative COVID-19 test. So far, just a few ticket refunds have been needed, and the season opener is expected to be sold out by next week, said Jazz spokesman Frank Zang.

“I think there’s understanding of what’s at stake here, in terms of having a safe environment for people to enjoy sports and concerts and shows again,” he said.

COVID-19 vaccinations have been given to more than 200 million Americans, and serious side effects have proved extremely rare. Experts say any risk from the vaccine is far lower than the danger posed by COVID-19.

Recent polling shows about half of Americans favor requiring workers in large companies to get vaccinated or tested weekly. But people are split based on their political party, with about 6 in 10 Republicans opposing the mandate for employees, according to the survey by The Associated Press and NORC-Center for Public Affairs Research.

Montana is the only state so far to pass a law banning private employers from requiring vaccines. The measure includes penalties for business owners of a $500 fine or prison. It is facing two court challenges, from the Montana Medical Association and from a law firm that says the rule interferes with businesses’ decisions about how to provide a safe working environment.

As judges weigh some of these cases, much will depend on exactly how the nationwide rule is written. It will be drafted as a temporary emergency rule by the Occupational Safety and Health Administration, which has broad power to regulate the workplace.

“They will have to frame it in a way that makes a case this is workplace-related and not just an attempt to raise vaccination rates in the United States more broadly,” said Dorit Rubinstein Reiss, a professor at the University of California Hastings College of the Law. “I expect the main benefit to the mandate will be that it gives cover to companies that already want to do that.”

LINDSAY WHITEHURST
The Seattle Times does not append comment threads to stories from wire services such as the Associated Press, The New York Times, The Washington Post or Bloomberg News. Rather, we focus on discussions related to local stories by our own staff. You can read more about our community policies here.
Advertising