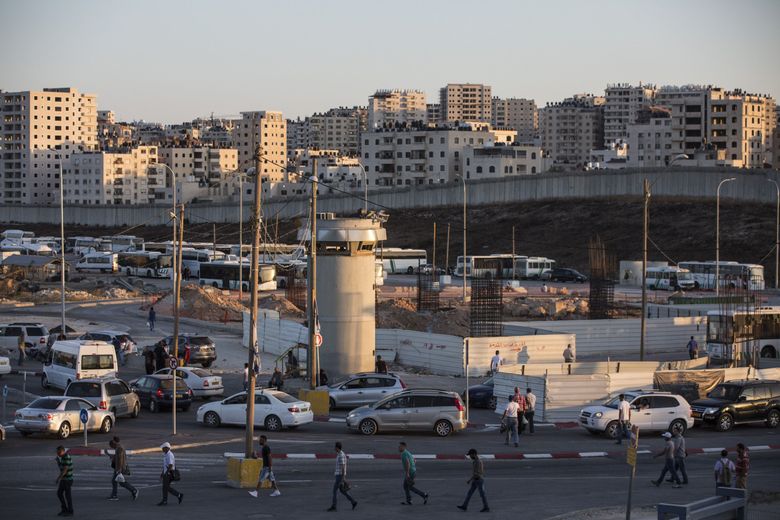 A tale of two AI cities: The Seattle connection to Israel's surveillance network

The Qalandia checkpoint leads from the West Bank to Jerusalem and Israel. According to the Coordinator of Government Activities in the Territories Unit, in June 2019, 1,295,893 Palestinian employees entered to work in Israel out of 2,113,061 total Palestinians, and the office issued 83.354 entering permits to Palestinians. (Heidi Levine/SIPA Press)

QALANDIA CHECKPOINT, West Bank –  For tens of thousands of Palestinians in the West Bank, the daily voyage into Israel for work, family visits and other business begins at this checkpoint near Jerusalem, reminiscent of a passage through a prison portal. Concrete walls surround the gray building at the Qalandia crossing that looks part transit terminal, part military bunker. Inside, families squeeze large suitcases through a labyrinthine hallway to reach a set of high-tech turnstiles armed with something as controversial as the checkpoint itself: facial recognition scanners.

On a recent late morning, a scanner’s green light washed over Khaled Habyeab’s face as he placed his magnetic ID card on a reader. The gate’s clear doors swished open. Like other Palestinians traveling to Israel for work, doctor’s visits or tourism, the Central West Bank resident must carry an ID card and a permit that lists his reason for visiting. Habyeab’s clean record, devoid of arrests and political activity, allowed him to receive a biometrics card from Israel’s Civil Administration office the same day he applied, the 30-year-old restaurant manager said. He planned to spend his day off touring Tel Aviv with his wife.

While the facial recognition systems installed at Qalandia and 26 other checkpoints last summer have drawn the ire of human rights advocates, Habyeab remarked on its effectiveness in comparison to the long waits in previous years when security guards manually checked IDs. The checkpoint was once packed with people waiting in a chaotic scene that resembled “chickens going through the chicken [coop],” he said.

Still, the facial recognition scanners serve as a reminder of the ever-present Israeli occupation of the area, Habyeab said through a translator: “There is no freedom.”

The facial recognition scanners were developed by Israeli artificial intelligence (AI) security startup AnyVision, which has ties with Redmond-based Microsoft. Microsoft’s venture capital fund, M12, came under fire for participating in a $74 million investment in the AI security company last June. AnyVision has not responded to repeated requests for comment.

Seattle and Israel’s AI ecosystem have long had close ties, from Microsoft’s and Amazon’s acquisitions of Israeli startups to ongoing academic collaborations. The global expansion of AI surveillance technology has some roots in Israel, with its fingerprints stretching to the U.S. border with Mexico. A 2016 Privacy International report found that Israel boasts the most surveillance firms per capita in the world. In recent weeks, Israeli Prime Minister Benjamin Netanyahu announced the nation would use counterterrorism measures such as digital surveillance technology to track people with possible exposure to COVID-19.

Israel’s adoption of biometric scanning serves as a global model — as well as cautionary tale — for tech solutions to privacy and safety concerns, as well as border security. Privacy advocates and human rights attorneys worry that the price of such high-stakes innovation comes at the risk of further eroding the already fraught relationship between Palestinians and Israelis.

Israeli cyberlaw attorney Jonathan Klinger believes the nation’s surveillance network is “based on having two classes of people here” — Israeli citizens with privacy protections, and West Bank Palestinians across the fence without rights.

In an old home that overlooks a trendy district in Tel Aviv, researchers at the Allen Institute for Artificial Intelligence (AI2) huddle over rows of computers with the goal to build natural language processing models.

The eight-person team strives to get machines to better understand human language, both written and spoken.

The Seattle-based institute established its first lab outside of the U.S. in Israel last year to harness the concentration of talent and to benefit from ideas generated in the so-called “startup nation,” said AI2 CEO Oren Etzioni. The collaboration between native English speakers in the Seattle office and Hebrew speakers in Israel provides “an edge to the way that we would model [systems]” by generalizing it for use in multiple languages, said AI2 research scientist Reut Tsarfaty as she sat in the Tel Aviv office’s airy living room.

AI research and development in Tel Aviv has soared in recent years: In 2018, AI companies raised nearly 40 percent of all venture capital investments in the nation, according to a Start-Up Nation Central report. Ran Laviv, the director of innovation and entrepreneurial affairs at Israel’s consulate in San Francisco, said Washington has a strong trade relationship with Israel that is focused on technology. Exports from Israel to Washington grew from $83.5 million in 2012 to $237 million in 2016, with the chief products consisting of computer and electronic parts.

Amazon has heavily invested in the region since opening its Amazon Web Services (AWS) Tel Aviv office in 2014.  In 2016, Amazon acquired Israeli chip company Annapurna Labs, which spurred the growth of AWS.

Microsoft has a long history in Israel, beginning with the 1991 launch of its first research and development center outside of the U.S., in Tel Aviv. The Redmond-based company announced plans to develop an Israel campus this year, and recently said it will launch a cloud data center there next year.

“This is further proof that Microsoft sees a strategic market in Israel,” Microsoft Israel General Manager Ronit Atad told the Times of Israel in January.

Microsoft has used Tel Aviv as a testing ground for its startup program, Microsoft Ventures Accelerator, which has since spread to China, France, India, Germany and England. The Tel Aviv program, launched in 2012, offers office space, mentorship and access to services to selected startups over four months.

Over the past two decades, Microsoft has acquired over a dozen Israeli tech companies including enterprise security and machine learning startup Aorato, text analytics service Equivio, and cybersecurity startup Hexadite, according to Laviv.

Along with the strong trade relationship, academic collaborations on AI research between the University of Washington and Israeli institutions Bar Ilan University and Tel Aviv University have fostered growing ties.

On the drive to Qalandia checkpoint, 40 miles east of Tel Aviv, a towering pillbox pokes through a clear patch of gray sky. The pillbox overlooks Highway 443, the site of several fatal attacks against Israeli commuters in the early 2000s.

At the Qalandia checkpoint, the Islamic call to prayer from a nearby village is faintly heard. A refugee camp across the street from the 18-year-old crossing is home to about 10,000 Palestinians and is where generations of families have lived since 1949.

On this day, Mahmoud Matari, a 29-year-old cellphone salesman traveled from Ramallah to request a permit for medical treatment. He presents a letter from the hospital that indicates the date and time of his appointment. Matari is resigned to the high-tech security at the crossing. “We have no choice,” he said, adding that “of course it makes me very angry.”

Matari would be concerned if the Israeli Defense Forces misused his stored information, he said, but “they can follow you without having a card.”

Other commuters include construction worker Muhammed Shalabi from Tulkarem, who passes through the checkpoint whenever he works in Tel Aviv and other parts of Israel. “It’s known that they have everyone’s information,” he said when asked if he’s concerned about the Israeli government’s collection of his data.

Along with his biometrics card, he received a permit from his Israeli employer to cross the checkpoint. Shalabi said he commutes five hours every day beginning at 3:30 a.m. because the pay is better on the other side.

The confluence of former military personnel — who are abundant given the nation’s mandatory military enrollment — and the focus on border security has spurred the creation of many AI surveillance startups in Israel, believes Steven Feldstein, nonresident fellow in the Carnegie Endowment for International Peace’s Democracy, Conflict, and Governance Program. In a 2019 report called The Global Expansion of AI Surveillance, Feldstein wrote that Israel was one of several nations with liberal democracies “actively selling sophisticated equipment to unsavory regimes” around the world.

The technology developed in Israel is then spread to other governments around the world concerned about border security, he said. For example, Israeli defense contractor Elbit Systems has built dozens of towers to spot people along the Arizona border — technology that was first developed to build a smart fence between Israel and the West Bank, according to a 2018 Bloomberg report.

The equipment at the Qalandia checkpoint is emblematic of security measures taken at the Israeli settlements in the occupied territory of the West Bank. At the Israeli settlement Halamish, about 30 miles north of Qalandia, high-tech cameras line the gates of the compound that saw bloodshed during a 2017 attack by a Palestinian man from a nearby village. Placed every 100 feet along the barbed-wire fence, the white cameras atop poles point outward to the hilly, arid terrain.

Miri Moaz-Ovadia, a Halamish spokeswoman, grew up in the 43-year-old Orthodox Jewish community of about 1,500 people and moved back there in 2014. As a teenager in the early 2000s, she said, the surrounding area was so unsafe for Israelis that many of them wore protective gear outside of the community. Now, she and her husband raise their three kids in an airy home with high ceilings. The doors are open to chirping birds outside. “People come here because they feel it’s a very safe place to raise a family,” said Moaz-Ovadia as she stroked her daughter’s hair in her living room.

The residents pay a private security company to patrol the area at times, said Moaz-Ovadia, and the cameras are funded with the help of the Israeli Ministry of Public Security and private donations. The AI-powered cameras use radar and video analytics to determine whether an animal or person has approached the system.

“I’m praying one day for peace and not needing any type of security or soldiers,” said Moaz-Ovadia. But until conflict ends, “we’re not holding our breath,” she added.

“The bottom line is I have three kids and I want them to be happy and safe,” said Moaz-Ovadia.

“Developing the technology to sell for profit … is not a legitimate reason to be surveilling people,” she said.

Last fall, Microsoft hired former U.S. Attorney General Eric Holder to audit AnyVision following concern about the company’s monitoring of Palestinians, and found that it “does not currently power a mass surveillance program in the West Bank that has been alleged in media reports,” according to a March 27 statement. Still, Microsoft’s M12 declared that it would divest its shares in AnyVision because it can’t exercise “oversight or control” of the technology.

Israeli human rights lawyer Eitay Mack said the extent of the Israeli government’s surveillance is unknown. He believes that Israel exports most of its AI surveillance systems abroad while within the country it relies on human security. The ubiquity of security forces sows distrust within the West Bank’s Palestinian community, he said, adding, “They don’t know if their neighbor or family member is collaborating with the Israeli Defense Forces.”

“It’s a way to fragmentize the Palestinian society,” Mack said.

Related More on The A.I. Age »