DNA testing is one of modern medicine’s most significant breakthroughs. Today, anyone can receive personalized information about their genes and ancestry with just a little saliva. Now, a Seattle-based company is working to bring equally deep analysis to another set of complicated molecules in humans: the trillions of proteins circulating within our bodies.

Nautilus Biotechnology, a company founded in 2016 by Seattle’s Sujal Patel and the San Francisco Bay Area’s Parag Mallick, is developing a device they say will be able to identify and count 95% of the different types of proteins in a biological sample.

The company wants to measure the key machinery inside cells with a level of detail that has never been done before. Existing tools, it says, can only measure up to 8% of the different types of proteins in blood samples.

Nautilus says such protein measurements, which are unique to every person and change throughout people’s lives, will not only help doctors identify more specific forms of disease, but also help pharmaceutical companies find more precise drugs with fewer side effects. 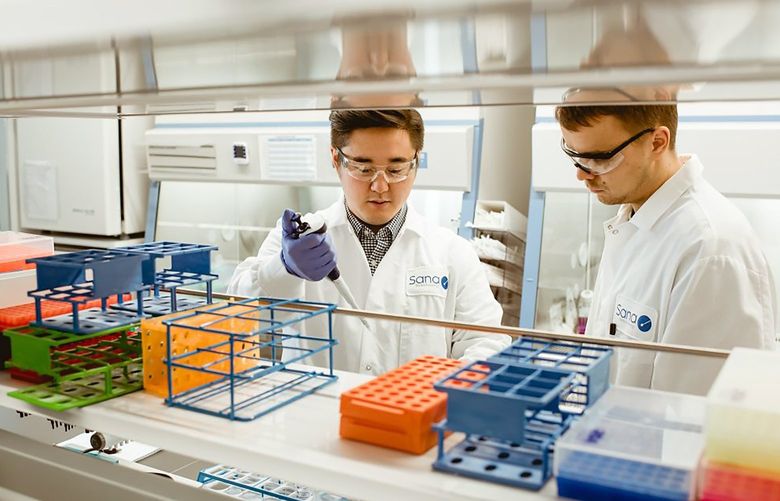 “All of those things in totality will transform the health care landscape,” said Patel, adding these new capabilities will bring about “a new paradigm” for medicine in the coming decades.

The company went public in June through a merger with Arya Sciences, an existing public company, in the process gaining access to $345 million in additional funding. Today, the company has more than 100 employees split between Seattle and the Bay Area, and has a market capitalization around $1 billion.

While other companies also are building new protein analysis machines, experts and prospective customers have expressed excitement over Nautilus’s approach. Mallick, chief scientist of Nautilus and the brain behind its technology, is confident: “It’s not every day when you get … to work on something that’s the opportunity to change all of biology.”

The ‘holy grail’ of diagnostic tests

Human cells can contain roughly 20,000 different types of proteins, with crucial functions ranging from digestion to disease protection. Each cell has a varying amount of each protein; there could be none, one or 1 million copies, depending on the cell.

The problem is scientists don’t have a great way of counting how many of each type of protein a cell has. Right now, tools are expensive, inefficient and can only count a fraction of all proteins. And unlike DNA, which remains largely unchanged throughout a person’s life, protein levels fluctuate constantly, depending on a person’s diet, health and environment.

Nautilus is going after this problem by building a machine it says will be able to quantify how many of each type of protein exist in a sample. Its end goal is providing a “proteome,” or a complete profile showing the amounts of each protein in blood samples, or tissue samples from different organs in the human body.

So why count proteins at all? Research shows healthy cells and diseased cells have differing amounts and forms of each protein. For example, cancer cells may have more of Protein A than Protein B. Knowing that might help in two ways: First, doctors could look for higher Protein A levels to detect cancer early. Second, researchers could better design drugs to target Protein A.

Nautilus could be on track to design “the holy grail” of diagnostic tests, said Dr. Joshua LaBaer, an oncologist who founded Harvard’s Institute for Proteomics and advises Nautilus.

Measuring proteins with this much detail will “fundamentally change, modify, refine” the way we classify diseases, said Dr. Caroline Popper, a pathologist and president of Popper and Company, a Baltimore-based consulting firm advising drug discovery and medical diagnostic companies. “We’ll be able to subgroup diseases with much more granularity,” she said.

For example, while studying DNA has made it possible to detect nearly half a dozen different types of breast cancer, Nautilus’s technology might be able to uncover and treat even more specific forms, LaBaer said. That’s why the work Nautilus is doing falls into a category often referred to as “precision medicine,” he said.

Another example: COVID-19. Mallick said the way coronavirus has been shown to physically affect each person differently “crystallizes the need for a technology … that can really get in and understand, on a personal basis, what is happening and what can we do about it.”

When Patel and Mallick started the company, their goal was simple. “Anybody who wants a proteome, gets a proteome,” Mallick said.

Given that protein counts are unique to each person, some may draw similarities between Nautilus’s technology and DNA testing services like those offered by California-based 23andMe, through which customers swab their saliva and receive an analysis of their genes with information on genetic health risks, ancestry and more.

Mallick pointed out that behind the scenes, 23andMe’s service relies on technology developed by another California company, Illumina, that is widely credited with driving down the cost of DNA testing from $100 million to less than $1,000. Illumina produces the machines that are used not only by consumer-facing DNA testing businesses, but also by researchers, hospitals and pharmaceutical companies.

In some ways, Nautilus is aiming to become the Illumina of protein analysis, creating the back-end capability that can be used by pharmaceutical companies, academic researchers and even consumer facing services.

“Will we be the ones directly selling to consumer? Probably not,” said Mallick. “But will we enable a new class of businesses that will be doing that? … I absolutely believe that.”

Powering the back-end of businesses is something Patel knows well. His previous company, Isilon, which was acquired for $2.6 billion in 2010, sold data storage hardware and software to businesses around the world. “The distribution model is very familiar to me,” Patel said, noting his experience managing a business-to-business sales team and shipping large, expensive machines to customers.

Nautilus said initial orders for their machine will cost around $1.1 million dollars, which also includes software and maintenance services for the first few years. The company plans to launch its machine in late 2023.

The global market for protein research is estimated by one source to reach $25 billion in 2021, and more than double by 2026. Stuart Nagae, director at Vulcan Capital, an early investor in Nautilus, said he wasn’t familiar with those forecasts, but said it’s difficult to estimate the size of the market because Nautilus is creating capabilities in protein research that have never existed before.

Competing against the ‘traditional way of doing things’

Nautilus is not the only company going after this problem. Other startups pursuing the same goal broadly fall into two categories: those trying to improve existing machines and those inventing new machines.

In the latter category, Nautilus faces competition from Connecticut-based Quantum SI, which went public in June and has a market capitalization of more than $1.6 billion, and California-based Encodia, which is private.

Patel said he’s less concerned about who can finish their machine first and more focused on the long term. He pointed out that Illumina, too, wasn’t first in its field, but ultimately ended up becoming the most successful. “Our sense is that our primary competitors in the marketplace will be the traditional way of doing things,” he said.

He said one key different is that others’ instruments need to “digest” proteins, or break them into smaller pieces, to count them. This breakage loses key information in the process. Nautilus, by contrast, keeps proteins intact.

However, some scientists suggest that even if Nautilus is successful, existing devices will still serve a purpose. The mass spectrometer, a common technology used for measuring proteins today, was invented nearly a century ago and has been improved on since. In 2020, the market for mass spectrometers was estimated to be $4.1 billion and is still projected to grow 6.5% annually. Like Nautilus’ machine, high-end mass spectrometers can cost up to $1 million.

Even though Nautilus could be “the new tool in town … it’s not replacing all the other tools I have in my box,” said Dr. Michele Pagano, chairperson of the New York University department of biochemistry and molecular pharmacology.

Still, if the technology works, Pagano said “my hope is that one day I can use this technology for my own work.”