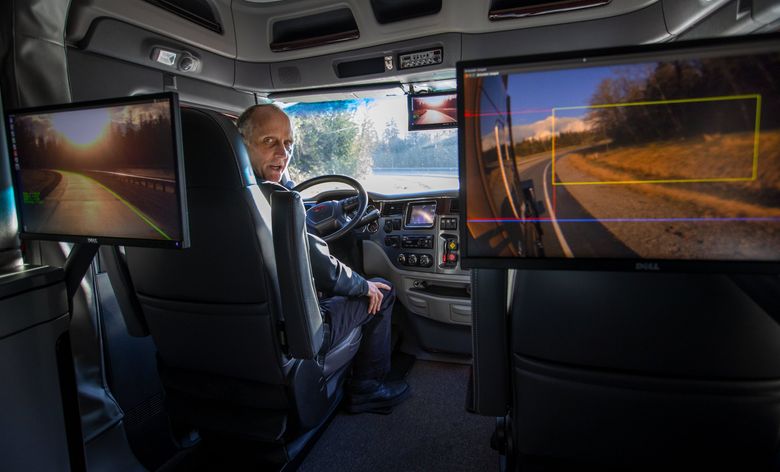 Chris Balton, lead automated driving engineer at Paccar’s Technical Center in Skagit County, drives this truck around a test track to demonstrate how technology guides the truck down the roadway. The monitors show how the truck sees the highway and surroundings. (Mike Siegel / The Seattle Times)

SKAGIT COUNTY — An engineer steered the cab of a freight truck onto a vacant track. The ride was smooth as the tires met a patch of light on the tree-lined road on a sunny day. Then the engineer flipped a switch, and the cab jolted to life as he lifted his hand from the steering wheel and his foot from the gas pedal.

The truck was now driving itself.

The testers in the truck were filled with giddy apprehension. For the several minutes it barreled down the track to test its durability, the creation was in control.

“I was impressed we made it past that bright patch,” said Philip Stephenson, general manager of commercial vehicle company Paccar’s Technical Center, as the autonomous Kenworth cab successfully rounded a shaded, then sunlit corner.

Impressive because the truck’s sensors rely on consistent lighting to detect lane edges through artificial intelligence (AI) algorithms. When Chris Balton, the driving engineer, first started testing the autonomous vehicles several years ago, these conditions would have forced him to take the wheel.

The autonomous-vehicle technology was being tested on Paccar ‘s 242-acre campus, cradled by farmland just west of the county airport. Deemed an essential industry by Gov. Jay Inslee’s coronavirus shutdown order, the company has continued testing — with modifications to allow for remote work and social distancing. Successes here could lead to a major shake-up in the freight industry.

Companies leading the charge in autonomous trucking hope that it will revolutionize the industry: Paccar says it’s focused on increasing safety and durability, as well as reducing driver actions to allow more people to operate vehicles. At the same time, the rapid development of the technology with little government oversight is leading to concerns over lost jobs for truckers, say trucking unions.

Touted for their potential to save thousands of lives lost in roadway crashes, autonomous vehicles have raked in billions of dollars in investment in recent years, according to industry researchers CB Insights.

The U.S. Department of Transportation’s National Highway Traffic Safety System envisions a near future of fully autonomous vehicles on the roads, bolstered by guidelines for the safe testing, development and implementation of advanced technologies. Companies that have specialized in passenger vehicles, such as Volvo and Tesla, are turning their attention to the trucking industry as they develop their own autonomous freight vehicles.

But an often-overlooked impact of autonomous vehicles is on people who drive for a living. Predictions vary on whether autonomous vehicles will negatively or positively affect truckers. A 2018 study commissioned by the American Center for Mobility and led by Michigan State University predicts that automated vehicles are unlikely to displace truckers in the foreseeable future.

Meanwhile, University of Pennsylvania sociologist and trucking expert Steve Viscelli projected in a 2018 research paper that nearly 300,000 trucking jobs will be lost to automation within the next 25 years.

Stephenson, of Paccar, is unsure when fully autonomous vehicles will hit the market, but he anticipates that the technology will be used soon on smaller scales, such as at transportation ports where there are few pedestrians and little traffic.

On the Paccar track, equipment mounted outside the vehicle — including cameras, lidar (a laser-based surveying method) and radar — feeds data into a computing system tucked inside a cabinet behind the driver’s seat. One monitor next to driving engineer Balton’s head displays real-time footage of the road, with objects identified by algorithms marked as signs or people. Another monitor shows detected lane markers.

Paccar selected its test campus in 1982 for its flat land and remote location, making it ideal to test prototypes of advanced technology for long-haul trucks, including AI-powered equipment. The facility’s 450 workers include technical specialists, engineers and scientists, and features labs where 3D printers create equipment prototypes out of plastic and metal.

The Bellevue-based company has no plans of slowing down in the near future: The company recently purchased another 135 acres of land to the south of its technical campus for future expansion.

The durability test track and an adjoining 1.5-mile oval have served as the testing ground for various iterations of Paccar’s autonomous vehicles over the past four years.

Inside the facility, the truck’s structure is tested for potential failures by hydraulic lifts, which convulse the cab and mimic real-life wear and tear. The metal hood of a cab trembles and roars during a simulation of riding on broken concrete in the warehouse-like room aptly called the shake lab.

Green cables attached to sensors on the vehicle transmit thousands of measurements from the tests. Machine learning is used to analyze the resulting data and predict the durability of the cab’s parts.

Across the campus, engines are placed in isolated cells, where workers analyze the data at computers on the other side of the glass. The tests allow Paccar to run engines as they normally would in a truck on the highway. In another room, air passes over a large cab at 75 mph, with temperatures ranging from -22 to 130 degrees Celsius (-7.6 to 266 degrees Fahrenheit). In this experiment, scientists test the amount of time it takes for a truck in weather slightly above freezing to properly inject diesel exhaust fluid into the system.

Some of the prototypes created at the Technical Center originate from ideas generated at Paccar ’s Silicon Valley Innovation Center. Opened in Sunnyvale, California, in 2017, the facility is housed in a long, gray building tucked into an industrial complex.

Paccar set up shop in Silicon Valley to be immersed in the burgeoning technological ecosystem of the area, to build partnerships with startups and companies, and to search for innovative products.

Inside, a shiny blue truck on display shows one proof of concept developed by audio-recognition app SoundHound and Paccar that uses voice recognition to command functions. “The more time the drivers can have their eyes on the road and their hands on the steering wheel, the safer the operation can be,” said Stephan Olsen, the company’s Silicon Valley Innovation Center general manager.

“OK, Hound, turn on the high beams,” Olsen said to the vehicle. A feminine robotic voice acknowledged the command and the high beams illuminated the space.

In 2019, the Washington State Transportation Commission launched the Automated Vehicle Work Group at the behest of the Legislature. The group, made up of public, private and nonprofit organizations and nine state agencies, examines the impacts of the rapidly growing field.

The work group’s suggestions informed one recently passed House bill that would create requirements for the testing of autonomous vehicles on public roadways and would require the companies to disclose testing information such as crash data.

State Transportation Commission Executive Director Reema Griffith said she anticipates the new technology could fill the shortage of more than 60,000 drivers around the nation, according to an American Trucking Associations 2018 year-end report.

But in the eyes of Sam Loesche, national legislative representative for the International Brotherhood of Teamsters, it’s not a matter of whether automation will impact truckers’ jobs, but when. “We haven’t seen concrete examples from anyone … in the industry that this will suddenly become a cool, savvy, technology-focused job,” Loesche said. He believes the industry should focus on retaining the current workforce rather than building a new one.

The median age for truck drivers is 47, according to Bureau of Labor Statistics estimates, and the long hours on the road and away from home can be lonely and physically grueling. Autonomous vehicle makers argue that advanced technologies would ease the hardships of long-haul driving, allowing drivers to do shorter stints on the road, or act as monitors of the equipment.

While Loesche said the Teamsters are in support of new technology such as lane departure warning systems that assist drivers and make their lives easier, he wants strict federal oversight of automated systems. Some drivers have already complained of malfunctions such as automated brakes slamming a vehicle at full speed to a halt when it falsely detected a bridge overpass as a potential obstacle, said Loesche.

Back on Paccar ‘s durability track, Balton, the driving engineer, demonstrates the ease of going from autonomous to manual control by placing his hands back on the wheel as he steers right to exit the road.

“Usually there’s a bed back here where we’re sitting,” said Stephenson, who was on a gray chair in the rear of the cab usually reserved as a sleeper compartment for drivers on long-distance trips. Asked if the day may come when beds in trucks are a thing of the past, he pondered a moment and said, “Potentially.”

Related More on The A.I. Age »