Anyone attending Apple’s first in-person September product launch since 2019 on Wednesday had to deal with all of the above before making it inside the company’s Cupertino, Calif., headquarters. But what waited on the other end was a prerecorded presentation video featuring Apple Chief Executive Tim Cook, briefly introduced by real-life Cook, along with some notable changes to the kinds of iPhones, smartwatch and ear buds Apple offers. 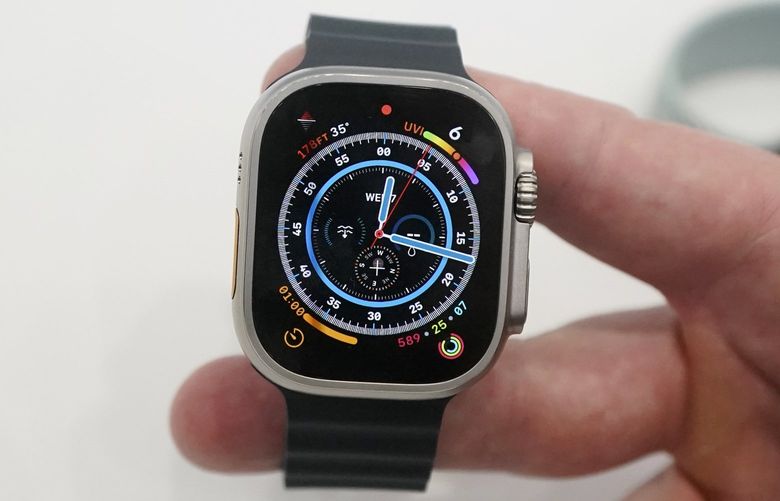 Below are the highlights from the Apple event.

– The iPhone 14 with emergency satellite connection

The new iPhone 14 will come with a feature that allows people to send emergency SOS messages by way of satellites. Here’s how it works: to connect to a satellite, you’ll be prompted to point your phone at a specific part of the clear sky. Because the bandwidth is so limited, sending even text messages can be extremely difficult – as a result, you’re essentially prompted to send a canned messages that describes the nature of your emergency.

You’ll also be able to use the Find My app to share your location via satellite if you’re well off the beaten track. The feature will become available in the United States and Canada in November, and iPhone customers will be able to use it for free for two years. If that sounds familiar, you’ve been paying attention: T-Mobile and SpaceX recently announced a somewhat similar system meant to help people in emergencies and far-flung locales send text messages. The catch? The service isn’t expected to work until sometime next year.

There are other changes to the iPhone lineup. Apple’s mini iPhones – which first appeared around two years ago – appear to have gone the way of the dodo. Instead, the new $799 iPhone 14 is joined by a new $899 iPhone 14 Plus model with a much larger, 6.7-inch display.

Apart from that shift in size, though, the iPhone 14 and iPhone 14 Plus don’t look particularly different from the iPhone 13 models they’re meant to replace. (They perform about the same too, since they use the same processors as last year’s models.) Most of the changes you’ll find here are firmly under the hood, but that doesn’t mean they’re any less interesting.

For one, these iPhones won’t come with physical slots for the SIM cards your wireless carrier usually give you. Instead, you’re meant to set up service on these devices solely with a digital “eSIM” – a feature that’s been found in iPhones for a few years.

As usual, Apple paid significant attention to the iPhone 14′s camera, though sticklers for photo quality may still prefer the company’s Pro models. The main camera found on the 14 and 14 Plus still captures 12-megapixel images, but is said to capture better photos in lowlight thanks to improvements in sensor design and optics. Meanwhile, their front-facing cameras are expected to take higher-quality selfies and videos thanks to, among other things, the inclusion of autofocus.

Apple Watch Series 8: First up, Apple announced a new Apple Watch: the Series 8. It comes with some cosmetic add-ons like fresh watch faces (hello, astronomy face). But most notable are the Watch’s health and safety improvements. Apple says the temperature sensors mean the Series 8 can help wearers track their menstrual cycles, ovulation and fertility.

Apple emphasized the existing privacy features of its period tracking options, after months of concern about how period-tracking information could be used for criminal cases in states where abortion was recently made illegal. Apple says that data will be end-to-end encrypted and the company won’t have the key to decrypt it.Additional motion sensors let the Watch detect car crashes, Apple says, letting wearers get help faster in case of an accident. The device will start at $399 and begin shipping Sept 16.

Apple Watch SE: Apple also updated its Apple Watch SE, an entry-level version of the wearable meant for smartwatch newcomers (and kids). It has a larger display compared with the company’s aging Series 3 watch, and packs the same emergency SOS and heart detection features as some earlier models. Curiously, though, the SE – which starts at $249 – includes the many of the same guts as the new Series 8, which means it can detect car crashes in action.

Apple Watch Ultra: There’s also a new addition to the Apple Watch lineup: a $799 rugged, more-capable version called the Ultra. With a larger and brighter screen, a hardened titanium shell and more-accurate GPS, the Ultra is supposed to appeal to the kinds of athletes who go diving and off-the-grid hiking. A set of new Watch bands are designed to work better on top of wet suits or during hard falls off rocks. The biggest news about the Ultra is its battery life: 36 hours – or even 60 hours while running a coming low-power mode. But that still can’t rival the weeks of battery life available on rival sports watches made by companies such as Garmin.

As for audio, the company revealed a new version of its AirPods Pro, a set of $249 in-ear wireless ear buds with noise cancellation that first debuted in late 2019. The company says the updated model packs a new H2 chip that provides “more detail and clarity” and better noise blocking compared to the prior version, though we’ll be the judges of that. In the run up to today’s event, some Apple observers expected the company to ditch its trademark AirPod stems. Instead, the company doubled down on them with new touch sensors built into the stems that will let users adjust volume with a swipe. At least some rumors were on the mark, though: as expected, the new AirPods Pro come in a case that can play an alert tone through a speaker if their owner misplaces them. If raising eyebrows is your goal, you can now have your own tiny “memoji” likeness engraved on the outside of the AirPods case.