Skip to content
By
Emma Goldberg
The New York Times

Executives at investment firm TIAA are especially proud of one aspect of their back-to-work plans: The company is on only its second round of setting a return-to-office date. It first hoped to bring employees back in January but was derailed by the omicron variant. Now the firm is targeting March 7.

“We noticed other employers were saying, ‘We’ll be back in April.’ ‘We’ll be back in June.’ But we said we need some certainty,” said Sean Woodroffe, head of human resources at TIAA, which has 12,000 U.S. employees. “This March 7 date is only the second time we announced a date.”

And Woodroffe is facing this new return-to-office date with optimism, he said, seated at his desk in front of a glimmering cityscape, high above what he described as the bustling “vibe” of New York City. After all, the firm has a 98% COVID-19 vaccination rate, employees have been supplied with at-home tests and the line at the Third Avenue Wendy’s has been inching longer during lunchtime.

“With omicron we realized that we needed to pivot from thinking about coming back into the office when COVID vanishes,” he said. “We recognized we have to pivot to how do you responsibly cope with COVID?” 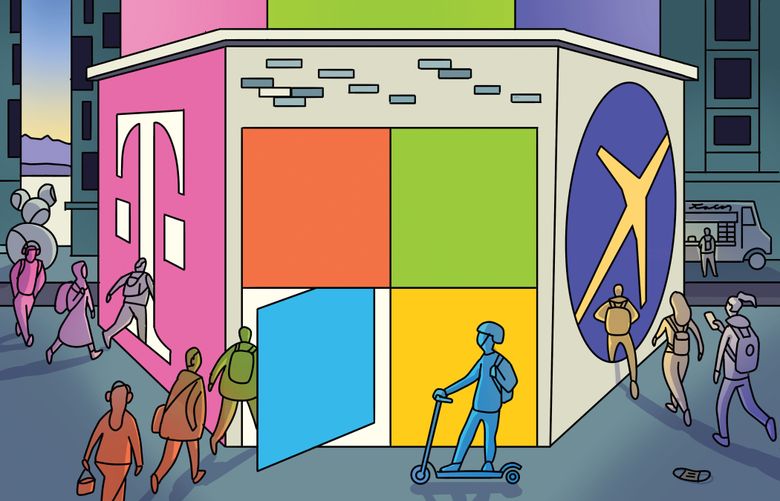 The two-year mark since many U.S. businesses sent their office workers home is approaching, and some antsy executives have delivered a long-delayed message: Return-to-office plans are real this time (fingers crossed). Managers are hanging up welcome balloons and dusting off monitors with a sense of confidence. Coronavirus tests are widely available, including some provided by employers. Many businesses know the majority of their employees are vaccinated. Many workers have recovered from omicron and are resuming indoor social activities.

Executives are entering the next zone of return-to-office planning with what psychologists call “stress-related growth.” They have endured a sustained period of tumult. They are emerging feeling hopeful, equipped with new insights about how to respond when COVID-19 cases surge and how to keep workers safe while businesses are open: by encouraging testing and imposing vaccine rules.

“There’s a very strong feeling we’re coming out on the other side,” said Keith McFall, chief operating officer of staffing provider Express Employment Professionals, based in Oklahoma City, which reopened its renovated office Feb. 7 after scaling back a phased reopening that had started in July and then delaying an intended January return.

And there is a sense of near-glee among some managers as their return-to-office plans cement: “It was like back-to-school week, quite frankly,” said Chris Glennon, vice president of global real estate and workplace at Intuit, who visited the company’s San Francisco office last week. Intuit fully reopened its offices on a voluntary basis Jan. 18 and is continuing to weigh timing for a required return.

Glennon noted that the company’s consulting physician had recently started a call by saying he had nothing but good news to share.

American Express told workers that they would be encouraged to return to the New York office starting March 1, followed by a broader return March 15. Meta, formerly Facebook, is starting its hybrid return to the office March 28. Microsoft said that starting Monday, workers would have 30 days to adopt working preferences with their managers, with the expectation that most would be able to work from home up to half the time, and Ford said in April that it would adopt a hybrid work program in which many employees can be partly in person and partly remote.

Goldman Sachs and JPMorgan Chase called employees back Feb. 1, and Citigroup said this week that its vaccinated U.S. employees should return to the office at least two days per week starting March 21, if they have not yet gone back. BNY Mellon broke from its Wall Street peers in introducing a more flexible work arrangement. Chevron, which had delayed its return to the office in January, required Houston workers to return Feb. 14. Some employers, like TIAA, candidly concede that in the case of a new variant, they might have to adjust their policies.

“This is the fourth call to arms,” said Kathryn Wylde, head of the Partnership for New York City, a business group, adding that she had recently met with a group of executives eager to see workers back in person. Some had postponed plans because of the delta and omicron variants of the coronavirus.

“They recognize the longer people are working remotely, the harder it’s going to be to bring them back to the office,” Wylde said.

Office occupancy across the country is creeping up after a January dip: It was at an average of 31% of pre-COVID-19 levels across 10 major cities this month, up from 23% in early January and down from a pandemic peak of 40% in the first week of December, according to security firm Kastle Systems. A report last month from the Partnership for New York City found that the majority of employers surveyed expected daily attendance in their offices to exceed 50% on an average weekday by late March.

But nonprofessional indoor activities have picked up more quickly, including dining and entertainment, leading executives to guess that the barriers to bringing their employees back might not be related to just health and safety. (The CEO of Morgan Stanley, James Gorman, articulated this frustration this past summer, declaring that if workers could go out to eat, they could go to the office.)

“It’s about overcoming the inertia that’s been built over a couple years,” said Mark Ein, chair of Kastle Systems. “It’s going to be a very, very long time before you see return to the office at the same level as you’ve seen the return to other parts of life.”

For workers struggling to prepare for the office — especially those with caregiving responsibilities or children too young to be vaccinated — the sprint feels premature. And many employers realize that without giving people leeway to decide where they work, they could lose talent to competitors that do.

BNY Mellon, which has nearly 50,000 employees worldwide, is allowing managers to determine which days employees will be in the office, a less rigid approach than many of its finance peers. Jolen Anderson, the bank’s head of human resources, said the bank was trying to be empathetic to what its employees needed and differentiate itself from other prospective employers.

“You can’t undo the experience we’ve had collectively together, and you can’t undo some of the benefits people have talked about around the ability of people to work remotely,” Anderson said. “It would be a shame not to consider those things as we design future work models.”