Nordstrom has sunk more than $500 million into its seven-story New York City flagship, but executives say it’s not just about one posh location close to other high-end retailers and Central Park. They paint the massive investment as a cornerstone of their multipronged strategy, a jumping-off point for future growth.

Amid a general slump in big-box retail, felt even by venerable New York department stores like Barneys and Lord & Taylor, pouring money into a physical location is risky, some analysts say. 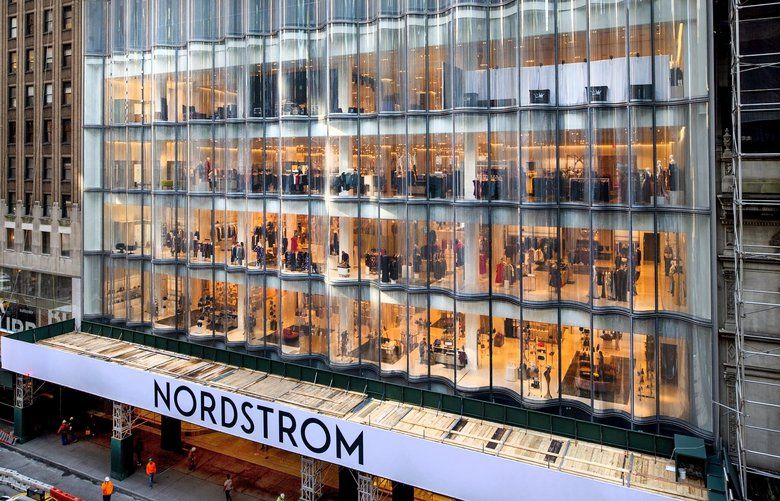 In past years, as competitors declared bankruptcies and buyouts, Nordstrom’s growth stayed strong. But there are recent signs that even Nordstrom may not be immune from the retail apocalypse. It has seen falling year-over-year revenues in the past three quarters. This summer, its share price was lower than anytime in the past 10 years, though the stock has since recovered slightly.

Nordstrom executives say the flagship is a calculated risk. And it’s working hard to win over investors.

Inside, assembled executives, including co-presidents Pete and Erik Nordstrom, sought to sell the assembled analysts and reporters on a strategy for spinning revenue from multiple channels, including online and at its off-price Rack stores, out of the seven-story flagship and the rest of the company’s physical fleet.

Nordstrom’s traditional focus on service is at the core of the strategy. Erik Nordstrom pointed to data he said showed that when customers engage with Nordstrom services like tailoring and personal styling, they spend as much as five times more than they otherwise would have.

“We’re now being more purposeful in trying to talk to customers about services,” he said.

Nordstrom is also going further to make those services available to online shoppers. It’s opening three more smaller, merchandise-free branches dedicated to pick-up, returns and tailoring, called Nordstrom Local, before the end of the year. The company has opened five Locals in the past 18 months — three in Los Angeles and two in New York City — and plans to install Locals in all of its top-10 markets by the end of next year, said chief operating officer Ken Worzel.

Nordstrom will also introduce similar services at some of its 249 Rack locations, though only for customers who have purchased full-price apparel, Worzel said, effectively turning those stores into Nordstrom Locals.

In Los Angeles, Worzel said, Locals have been a “material differentiator” for the company, boosting sales. “Customers are responding to them in a big way,” he said.

The company is rolling out same-day delivery in New York, and next-day delivery in other big markets like Los Angeles, in part by fulfilling online orders directly from retail locations when possible.

Executives were careful to emphasize that while the opening of a Manhattan flagship is the culmination of a generations-long Nordstrom ambition, that doesn’t mean the decision wasn’t carefully calibrated.

The store’s location at the base of an ultra-high-end condominium tower near the southwest corner of Central Park will allow it to draw in both neighborhood shoppers and tourists, Pete Nordstrom said. Overall, New York presents an opportunity for $700 million in annual sales, said chief financial officer Anne Bramman.

Not everyone is convinced Nordstrom is moving the right direction with its flagship, however.

“This investment may be a flop,” said Camilla Yanushevsky, a retail analyst at CFRA Research who was interviewed separately. “We think it’s a pretty big gamble for Nordstrom.”

For one, Nordstrom may find the New York market tougher to succeed in than executives are broadcasting. Lord & Taylor and Ralph Lauren recently closed their Fifth Avenue flagships. And Nordstrom’s new store will need to sell a lot of merchandise to make its 320,000-square-foot lease viable. It has invested “north of $500 million” in the project, Bramman confirmed Tuesday.

“The test over time is whether they’ll be able to monetize that big of a space,” said Kathy Gersch, a former Nordstrom vice-president who left in 2002 and now advises firms on organizational change for Kotter. “Other retailers are getting rid of space.”

Nordstrom, though, sees that space as a necessary investment in its brand — even though last quarter, in-person sales fell while online sales grew by 4%.

At the Tuesday meeting and on a press tour of the store Monday, executives framed their vision for the future of the Nordstrom brand as delivering a complement of services across digital and physical platforms — for example, 24/7 in-store pickup for clothes ordered online.

Still, Yanushevsky said, for all Nordstrom’s hoopla over such services, stores like Barneys, which filed for bankruptcy in August, have similar offerings.

“The question is, what’s Nordstrom doing differently?” she asked.

Nordstrom hasn’t invested as heavily in unique products or partnerships with designers, which is where other retailers have been seeing strong growth, she said — although the flagship will carry some exclusive items, executives said.

It remains to be seen whether that will be enough: Analysts say they won’t be able to decree whether the flagship is a success for at least a year, when they have more information about year-over-year sales trends.

Still, someone must have liked the pitch: Shares of Nordstrom were up 3.4% Tuesday while the main market indexes were slightly in the red.