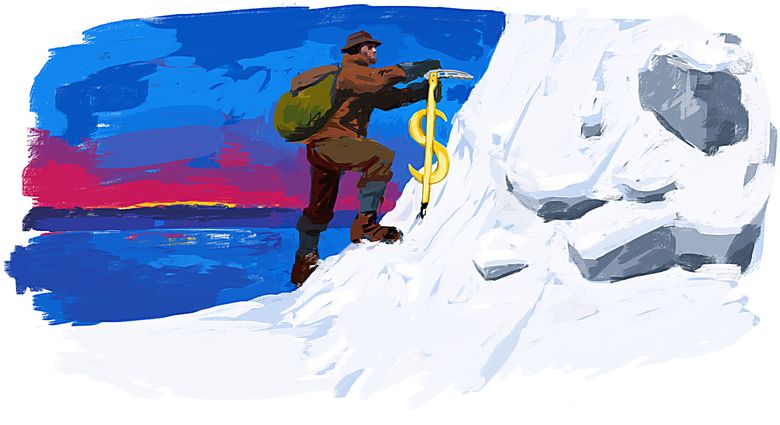 REI, America’s largest consumer co-op, strives to maintain its hard-earned authenticity. But less than 1 percent of members voted in its latest election, raising questions about what its member-owned status really means.

REI’s business acumen has taken it to lofty heights rarely seen by a retail cooperative.

But as a record-low turnout in the latest annual election shows, REI’s original democratic fervor seems to have stayed at base camp. Members these days engage more via Twitter, Facebook or email.

They behave more like customers than co-owners, underscoring how rapid growth has radically altered the relationship between members and a Seattle institution that’s finding new ways to stick to its co-op cred and keep them engaged.

Founded in 1938, the Kent-based outdoor-gear purveyor is the nation’s largest consumer-owned retail co-op, with the twin mandates of taking care of its members and spreading the love for the outdoors.

It has recently re-emphasized its roots by launching a line of clothing marked with an “REI Co-Op” logo resurrected from the 1970s. In November, REI put its money where its mouth is by paying its employees to go outside on Black Friday, while most U.S. merchants started their annual holiday frenzy.

But REI is also a retail juggernaut that last year had half a billion bucks in the bank, more dough than many shareholder-owned rivals.

How a member-owned co-op became such a national retail force puzzles some business experts.

“It’s like biologists looking at male peacocks. Anything we know about survival doesn’t make sense,” says Jonathan Karpoff, a professor of finance at the University of Washington’s Foster School of Business.

Its very success at attracting new members — they now top 5.5 million — and expanding nationally since the 1980s has diluted the involvement of its membership in the running of the co-op’s affairs.

In 2015, fewer than 1 percent bothered to vote in its annual election of board members. At PCC Natural Markets, another locally based co-op with more than 50,000 members, turnout was close to 4 percent.

“In years past, being a member held meaning. People used to care about their REI number,” said Tim King, a Seattle cycling activist and blogger who used to work at REI in the 1980s, referring to the time when five- and six-digit membership numbers signaled long tenure and outdoor cred. His aunt June’s number, which he used for years, was in the four digits.

Now, as members number in the millions, “It’s more about getting the discount than a relationship to the co-op. What’s the difference between an REI membership and the Safeway Club card or other preferred shopper cards they’re carrying in their wallets?”

REI says that the poor turnout in the latest election is due to its switch last year to online voting, and this year it’s working on making it easier.

But REI also contends that the way people get involved with the co-op has changed fundamentally from a time when there were no smartphones or Internet, and there was only one local store.

Last year the co-op received 1.4 million calls, chats and emails from members asking about products or about the co-op’s programs.

Some 2.9 million people follow REI on social media and are actively engaged, the co-op says, and about 100,000 people read its outdoors publication on Medium, an online-publishing site.

Last year a quarter of a million people trained in outdoor activities with the co-op, up 25 percent from 2014.

“That spirit is still alive,” says CEO Jerry Stritzke, who pointed to the rapid response by members to a fundraising blitz after the Nepal earthquake last year. “Literally within 24 hours we raised over $260,000 for the earthquake. Four thousand people giving money just from a note.” Ultimately more than $820,000 was raised, REI says.

Mike Beall, former CEO of the National Business Cooperative Association, said that in a large co-op like REI, people who are “passionate and interested” as well as qualified end up in the driver’s seat. Most members, on the other hand, “are voting with their feet.”

Some experts say the co-op essence has been crucial to REI’s success in a sector beset by volatility. At a time when many retailers have trouble distinguishing themselves from the pack, REI members are drawn in by a brand they perceive as “genuine, sincere, knowledgeable,” says Neil Stern, a Chicago-based retail expert with McMillanDoolittle.

It also helps employee buy-in. At the co-op’s wood-paneled headquarters in Kent, an employee-run dog day care and the throngs of staffers biking or doing yoga at lunch hour give REI a pleasant, laid-back vibe. In 2014 REI introduced so-called “Yay Days,” giving employees two paid days off annually so they can go play outdoors or volunteer.

“I get to bike to work,” says chief operating officer Eric Artz, who took a 38 percent pay cut to jump from Urban Outfitters to REI in 2013.

Since 1998, the co-op has been on Fortune’s best places to work list every year. Overall turnover is at a relatively low 33.7 percent, well below the 60-plus percentage rates seen by many retailers.

Another advantage of being a co-op: Since REI is technically owned by millions of members who’d get little cash from a takeover, it’d be very cumbersome for a rival to buy it out.

“It’s next to impossible to acquire REI,” says Brian Unmacht, who had a 27-year career at REI before his current stint as CEO of Bartell Drugs.

A Seattle Times story from the 1980s says General Mills once tried to buy the co-op, only to be turned away by founder Lloyd Anderson.

Under the guidance of Stritzke, a veteran retail executive who was hired in 2013 from luxury brand Coach, REI is deepening its reach into the eastern half of the U.S., pursuing what its executives say is a sustainable, not breakneck, pace of growth.

“The biggest difference for me” between REI and traditional for-profit companies, says Stritzke, is that REI has a “broader, longer term, probably even a little healthier definition of success.”

Successful growth, executives and board members say, gives REI the firepower to get good deals from suppliers and pursue an ever-growing philanthropic agenda. (The co-op lobbies for environment-friendly policies in Washington, D.C., and its outreach efforts are deployed nationwide.)

By the measurements it publishes for its members’ benefit, the co-op is doing enviably well. Sales reached $2.2 billion in 2014, up 9.9 percent from the previous year (and two and a half times its revenue from a decade ago).

Such numbers surprised Jim Whittaker, REI’s first full-time employee, longtime CEO and storied mountain climber. “When they opened the first outlet (in Berkeley, Calif.) I thought: This could get big. I couldn’t imagine we’d be making $2 billion,” he said.

The co-op last March also paid record dividends of $168 million to its members for 2014. A lifetime membership costs $20, while entitling members to an annual 10 percent refund, or dividend based on what they spend; members plow a lot of that money back into further REI purchases every year.

But perhaps more interesting is the money that it has squirreled away. By the end of 2014 it had some $532 million in cash — serious money for a retailer. Nordstrom, which dwarfs REI by a factor of six, kept $827 million on hand at the end of its 2014 fiscal year.

That’s cash that the co-op, which unlike publicly traded companies cannot raise money from selling stock, needs for new flagship stores, to buy inventory and to provide a measure of financial stability (it has no debt or lines of credit). REI also says the cash hoard helps fund the dividend and its nonprofit contributions in years where sales are not so good.

In the past REI has also invested in or acquired outdoor-gear manufacturers, and last year it bought Adventure Projects, a Colorado-based company that creates apps and websites for climbers, bikers and hikers.

Yet the way REI drives some of its membership growth has drawn sharp criticism from some in-store staffers.

During an “Ask Me Anything” conversation on the social-media site Reddit in November, a person claiming to be an employee queried Stritzke about the “obsessive emphasis” on membership sales. The employee complained of getting a cut in work hours after failing to recruit enough members.

Stritzke replied on Reddit that he himself was surprised by the co-op’s emphasis on membership sales when he joined. He added that while that focus has been core to REI for years, “We may have lost sight of the bigger picture,” and that perhaps the co-op should focus more on a “pull” model, making the advantages of membership so obvious that it would be unnecessary to be pushy about it.

Later, in an internal post on the co-op’s employee site, Stritzke wrote that the discussion about membership sales was “legitimate,” and that management was “digging in further.”

REI officials said that next month the co-op will roll out a new approach where individual goals for securing new members will be replaced by team goals.

The co-op’s proselytizing has undoubtedly worked: Active membership in 2014 rose about 4.1 percent from the previous year. Since 2005, the annual growth in active members averages 7.8 percent.

At the latest annual membership meeting in May, held in a half-empty community hall at the REI flagship store in Seattle, only two people asked questions after listening to a polished presentation by Stritzke. And neither question had to do with the co-op’s finances, policies or big-picture plans.

While REI contends that members are now more engaged than ever through various means, the recent low turnouts might reflect the fact that elections now are less exciting. Before 2005, outsider candidates could run for a seat on the board if they gathered enough signatures. Since then the board itself nominates new directors.

Likewise, in the 1998 election members voted on the first board pay raise in 15 years. But since 2002, the board sets its own compensation, a policy REI says is “consistent with companies of similar size and scope.”

Back in the day, board members used to be local doctors, lawyers or outdoors activists; in the 1990s they were paid only about $4,000 a year.

Now they’re paid more than $80,000 a year, and come from high perches in tech, law and retail. The current board includes Christine Day, a former Starbucks executive and ex-CEO of Lululemon.

The board’s heightened powers may reflect the increasing demands of running what had already become a sophisticated business.

“The board needed to address problems of growth and management,” says Ángel Rodríguez, a former bike-shop owner who sat on the board for 14 years starting in 1993. “They didn’t just want to leave that exposed to a bunch of petition candidates.”

But the board’s stronger hand also highlights an issue many co-ops face as they grow, the UW’s Karpoff said: powerful stewards with little scrutiny from members.

REI’s CEO Stritzke says that being big is good because it helps more people enjoy the outdoors, and that members have more opportunities than before to connect transparently with the leadership.

Moreover, leaders are accountable for making sure most of the co-op’s profit goes back to the outdoor community.

“Engagement with the co-op is deeper than ever,” he said.