As hundreds of businesspeople and volunteers spent Sunday cleaning up the damage from two nights of rioting, there was a palpable sense of resolve to get past this latest setback to a downtown business community that has seen more than its share of adversity.

But there was also anger that city and police officials had allowed the rioting to spiral out of control, as well as fear the weekend’s destruction could make recovery even more difficult for businesses already wounded by the pandemic shutdown.

“This isn’t going to make that any easier,” said Jon Scholes, CEO of the Downtown Seattle Association, who described the destruction, which ranged from smashed windows to the torching of vehicles to widespread looting, as worse than what the city saw during the 1999 WTO riots. “It’s something we’ve just never seen in downtown Seattle.”

The riots swept through Seattle on Friday and Saturday nights, overtaking what had begun as peaceful protests over George Floyd’s killing by a Minneapolis police officer, who pressed his knee into Floyd’s neck for several minutes during an arrest last week.

Along parts of Pine Street, where many of the confrontations between police and rioters took place, few businesses were untouched. Windows were smashed or spray-painted with slogans and profanity. Nearly three dozen storefronts were damaged in the downtown core, Scholes said.

On Saturday night, the intersection of Pine Street and Sixth Avenue had looked like a war zone, with burned-out vehicles still on the street and streams of people entering Nordstrom and other stores through smashed windows and emerging with armfuls of loot. Vandals breached Pacific Place shopping mall, where windows reflected cars ablaze across the street.

Looters threw perfume and designer purses from a Nordstrom window to a crowd gathered around the still-smoking wreckage of a police car. Downtown locations of national retailers Eileen Fisher, Old Navy and The North Face, among others, were pillaged.

“The big question for everyone is are people going to come downtown and shop?” said Pipo Bui, the owner of Seattle Coffee Works, which had a window smashed at its new Pine Street flagship around 8 p.m. Saturday.

“I’m a little bit nervous about it because I don’t know what’s going on here,” Tom Dang, whose International Model Toys in the International District wasn’t damaged, but who saw many other businesses in the area hit. After being closed for more than six weeks, Dang said he is now worried about the community’s ability to bring in business. After this weekend’s violence, he said, “I don’t want to be around the neighborhood.”

Mayor Jenny Durkan acknowledged the extra challenge the damage brings for businesses “coming out of the pandemic,” and said the city was already mobilizing resources.

“We’re reaching out to every business so that we can help assess the level of damages and what the city could do to help restore the downtown core,” Durkan said Sunday afternoon, adding that city crews had scrambled to help shopowners board up windows in the International District, Pioneer Square and the downtown core.

The scope of that damage may take weeks to fully measure. Scholes added that it was “millions and millions of dollars in property damage alone, and far more in terms of lost economic activity.”

On Sunday morning, the sound of saws, hammers and power drills rang out on streets that, just 12 hours earlier had echoed with flash bangs, protest chants and police calls to “Move back!” Across the shopping district and beyond, dozens of groups of volunteers — knit together from family, friends, sports teams, faith groups and fraternities — had swept into downtown to cover broken windows with plywood, clear glass from streets and wash graffiti off walls.

At Nordstrom, contractors hauled in plywood and lumber to cover shattered windows before the 5 p.m. curfew and the arrival of what some feared would be a second wave of protests and vandalism. “We’re just trying to get it cleaned up and secured,” said Dmitriy Bogomaz, a contractor who had worked on the Nordstrom remodel and had offered his services as soon as he heard about the vandalism Saturday night.

Although many business leaders expressed solidarity with the message of the demonstrations, there was deep anger, too — at the vandals who reportedly used the cover of a legitimate protest to wreak havoc on local businesses. There was also concern that city and police officials had been unable to contain the damage.

“Where were the police?” said one executive who was helping supervise a window-covering operation near Pine Street but declined to give his name.

Even before the weekend’s violence and the months-long coronavirus pandemic shutdown, downtown Seattle business owners said they often felt they were under siege, held hostage by a cyclical pattern of crime that has led some businesses to quit the downtown corridor, and others threatening to do so. The coronavirus alone had wiped out nearly 50,000 jobs and caused restaurant revenue to plummet by nearly 80%, according to the Downtown Seattle Association.

After Friday’s unrest, many downtown businesses took preemptive action. The Seattle Fire Department advised business owners to board up stretches of the city, lengthening the blocks of plywood facade already in place to deter looting during the pandemic.

In some cases, buildings and businesses were spared only because owners or tenants stood guard. 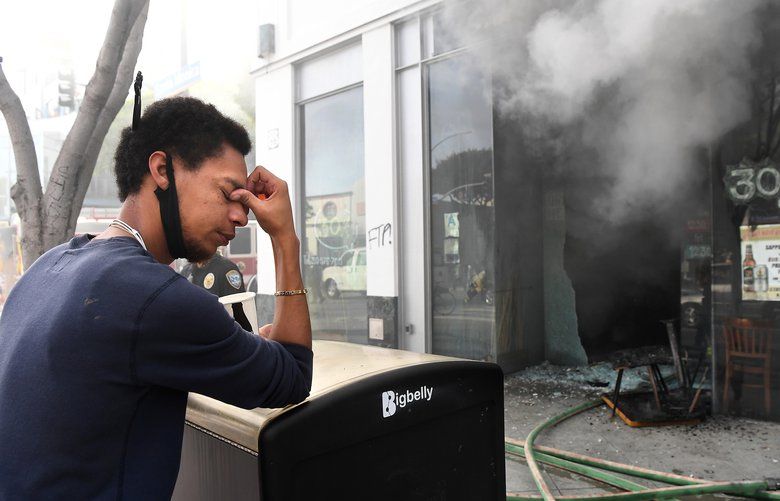 Will insurance cover businesses damaged by looting? It depends

Instacart and Amazon Flex temporarily suspended operations at 5 p.m. Saturday, according to one driver who works for both delivery services. Instacart did so again on Sunday until 5 a.m. Monday “to help ensure the safety of our shopper community,” as Instacart put it in an email to its shoppers late Sunday afternoon.

“We are monitoring the situation closely and in a handful of cities we’ve adjusted routes or scaled back typical delivery operations to ensure the safety of our teams,” an Amazon spokesperson said in a statement. Protesters Friday had smashed the windows of the cashierless Amazon Go Grocery store in the Capitol Hill neighborhood, though it later reopened. The company reportedly also closed a few local warehouses Sunday.

Nordstrom, which temporarily closed all its stores Sunday, declined to give details about damage to its downtown store. “We had impacts at some [locations] and are in the process of assessing that damage and making repairs so we can resume serving customers,” a spokesperson said in an email. “We hope to reopen our doors as soon as possible.”

Looters emptied outdoor apparel retailer Columbia Sportswear on Third Avenue and Pine Street; a spokesperson for the national outdoor apparel brand said it was still assessing the extent of the damage.

“There are so many more important issues than a pane of broken glass,” Winkel said, as a contractor screwed plywood into the door frame. The location, near the Third Avenue and Pike corridor known as The Blade, where guns blazed in January, can be problematic in the best of times, he said. But difficulties like petty crime and open drug use, he said, are vastly overshadowed by “what’s going on in the nation. It’s a challenging time. We’re incredibly divided.”

Scholes of the Downtown Seattle Association said several businesses, including The Gap and Old Navy, had been preparing to offer curbside pickup under Gov. Jay Inslee’s newly announced reopening schedule and not long before the violence struck. Now, they and other damaged businesses need to replace not only shattered windows, but stolen merchandise and damaged shelving before they can reopen.

In the International District, volunteers covered the windows of Tanya Nguyen’s ChuMinh Tofu with plywood Sunday morning in anticipation of more violence, as Nguyen served vegan egg rolls to people. One of the store’s windows was smashed Friday night, Nguyen said.

The restaurant has been struggling since the start of the coronavirus outbreak. After sales fell by nearly 50% in February, Chan asked his 40 employees to take a pay cut. Most refused, saying they’d rather go on unemployment. Now, 19 people work in the restaurant, many of them Chan’s family and friends who volunteer their labor, he said. Prices for groceries and to-go containers have risen as the pandemic drags on, further straining his bottom line, he said.

The store’s back window was smashed in late March. Chan, who is Chinese, said since April he’s also been the target of xenophobic online harassment he links to an uptick in coronavirus-related hate crimes against Asians.