In the story of how the modern world was constructed, Toyota stands out as the mastermind of a monumental advance in industrial efficiency. The Japanese automaker pioneered so-called Just In Time manufacturing, in which parts are delivered to factories right as they are required, minimizing the need to stockpile them.

Over the past half-century, this approach has captivated global business in industries far beyond autos. From fashion to food processing to pharmaceuticals, companies have embraced Just In Time to stay nimble, allowing them to adapt to changing market demands, while cutting costs.

But the tumultuous events of the past year have challenged the merits of paring inventories, while reinvigorating concerns that some industries have gone too far, leaving them vulnerable to disruption. As the pandemic has hampered factory operations and sown chaos in global shipping, many economies around the world have been bedeviled by shortages of a vast range of goods — from electronics to lumber to clothing.

In a time of extraordinary upheaval in the global economy, Just In Time is running late.

“It’s sort of like supply chain run amok,” said Willy C. Shih, an international trade expert at Harvard Business School. “In a race to get to the lowest cost, I have concentrated my risk. We are at the logical conclusion of all that.”

The most prominent manifestation of too much reliance on Just in Time is found in the very industry that invented it: Automakers have been crippled by a shortage of computer chips — vital car components produced mostly in Asia. Without enough chips on hand, auto factories from India to the United States to Brazil have been forced to halt assembly lines.

But the breadth and persistence of the shortages reveal the extent to which the Just in Time idea has come to dominate commercial life. This helps explain why Nike and other apparel brands struggle to stock retail outlets with their wares. It’s one of the reasons construction companies are having trouble purchasing paints and sealants. It was a principal contributor to the tragic shortages of personal protective equipment early in the pandemic, which left frontline medical workers without adequate gear.

Just In Time has amounted to no less than a revolution in the business world. By keeping inventories thin, major retailers have been able to use more of their space to display a wider array of goods. Just In Time has enabled manufacturers to customize their wares. And lean production has significantly cut costs while allowing companies to pivot quickly to new products.

These virtues have added value to companies, spurred innovation and promoted trade, ensuring that Just In Time will retain its force long after the current crisis abates. The approach has also enriched shareholders by generating savings that companies have distributed in the form of dividends and share buybacks.

Still, the shortages raise questions about whether some companies have been too aggressive in harvesting savings by slashing inventory, leaving them unprepared for whatever trouble inevitably emerges.

“It’s the investments that they don’t make,” said William Lazonick, an economist at the University of Massachusetts.

Intel, the American chipmaker, has outlined plans to spend $20 billion to erect new plants in Arizona. But that is less than the $26 billion that Intel spent on share buybacks in 2018 and 2019 — money the company could have used to expand capacity, Lazonick said.

Some experts assume that the crisis will change the way companies operate, prompting some to stockpile more inventory and forge relationships with extra suppliers as a hedge against problems. But others are dubious, assuming that — same as after past crises — the pursuit of cost savings will again trump other considerations.

Chaos on the seas

The shortages in the world economy stem from factors beyond lean inventories. The spread of COVID-19 has sidelined port workers and truck drivers, impeding the unloading and distribution of goods made at factories in Asia and arriving by ship to North America and Europe.

The pandemic has slowed sawmill operations, causing a shortage of lumber that has stymied home building in the United States.

Winter storms that shut down petrochemical plants in the Gulf of Mexico have left key products in short supply. Andrew Romano, who runs sales at a chemical company outside Philadelphia, has grown accustomed to telling customers they must wait on their orders.

“You have a confluence of forces,” he said. “It just ripples through the supply.”

Dramatic increases in demand made pet food scarce and Grape-Nuts cereal all but disappear from American store shelves for a time.

Some companies were especially exposed to such forces given that they were already running lean as the crisis began.

And many businesses have combined a dedication to Just In Time with a reliance on suppliers in low-wage countries like China and India, making any disruption to global shipping an immediate problem. That has amplified the damage when something goes awry — as when an enormous vessel lodged in the Suez Canal this year, closing the primary channel linking Europe and Asia.

“People adopted that kind of lean mentality, and then they applied it to supply chains with the assumption that they would have low-cost and reliable shipping,” said Shih, the Harvard Business School trade expert. “Then, you have some shocks to the system.” 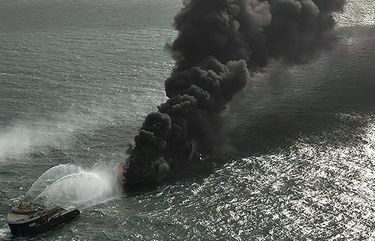 An idea that went ‘way too far’

Just In Time was itself an adaptation to turmoil, as Japan mobilized to recover from the devastation of World War II.

Densely populated and lacking in natural resources, Japan sought to conserve land and limit waste. Toyota eschewed warehousing, while choreographing production with suppliers to ensure that parts arrived when needed.

By the 1980s, companies around the globe were emulating Toyota’s production system. Management experts promoted Just In Time as a way to boost profits.

“Companies that run successful lean programs not only save money in warehouse operations but enjoy more flexibility,” declared a 2010 McKinsey presentation for the pharmaceutical industry. It promised savings of up to 50% on warehousing if clients embraced its “lean and mean” approach to supply chains.

Such claims have panned out. Still, one of the authors of that presentation, Knut Alicke, a McKinsey partner based in Germany, now says the corporate world exceeded prudence.

“We went way too far,” Alicke said. “The way that inventory is evaluated will change after the crisis.”

Many companies acted as if manufacturing and shipping were devoid of mishaps, Alicke added, while failing to account for trouble in their business plans.

“There’s no kind of disruption risk term in there,” he said.

Experts say that omission represents a logical response from management to the incentives at play. Investors reward companies that produce growth in their return on assets. Limiting goods in warehouses improves that ratio.

“To the extent you can keep reducing inventory, your books look good,” said ManMohan S. Sodhi, a supply chain expert at the City, University of London Business School.

From 1981 to 2000, American companies reduced their inventories by an average of 2% a year, according to one study. These savings helped finance another shareholder-enriching trend — the growth of share buybacks.

In the decade leading up to the pandemic, American companies spent more than $6 trillion to buy their own shares, roughly tripling their purchases, according to a study by the Bank for International Settlements. Companies in Japan, Britain, France, Canada and China increased their buybacks fourfold, though their purchases were a fraction of their American counterparts.

Repurchasing stock reduces the number of shares in circulation, lifting their value. But the benefits for investors and executives, whose pay packages include hefty allocations of stock, have come at the expense of whatever the company might have otherwise done with its money — investing to expand capacity, or stockpiling parts.

These costs became conspicuous during the first wave of the pandemic, when major economies including the United States discovered that they lacked capacity to quickly make ventilators.

When the pandemic began, car manufacturers slashed orders for chips on the expectation that demand for cars would plunge. By the time they realized that demand was reviving, it was too late: Ramping up production of computer chips requires months.

The impact to production will get worse before it gets better.”
— Jim Farley, CEO of Ford, which said shortages would probably derail half its production through June

“The impact to production will get worse before it gets better,” said Jim Farley, chief executive of Ford, which has long embraced lean manufacturing, speaking to stock analysts on April 28. The company said the shortages would probably derail half its production through June.

The automaker least affected by the shortage is Toyota. From the inception of Just in Time, Toyota relied on suppliers clustered close to its base in Japan, making the company less susceptible to events far away.

In Conshohocken, Pennsylvania, Romano is literally waiting for his ship to come in.

He is vice president of sales at Van Horn, Metz & Co., which buys chemicals from suppliers around the world and sells them to factories that make paint, ink and other industrial products.

In normal times, the company is behind in filling perhaps 1% of its customers’ orders. On a recent morning, it could not complete a tenth of its orders because it was waiting for supplies to arrive.

The company could not secure enough of a specialized resin that it sells to manufacturers that make construction materials. The American supplier of the resin was itself lacking one element that it purchases from a petrochemical plant in China.

One of Romano’s regular customers, a paint manufacturer, was holding off on ordering chemicals because it could not locate enough of the metal cans it uses to ship its finished product.

No pandemic was required to reveal the risks of overreliance on Just In Time combined with global supply chains. Experts have warned about the consequences for decades.

In 1999, an earthquake shook Taiwan, shutting down computer chip manufacturing. The earthquake and tsunami that shattered Japan in 2011 shut down factories and impeded shipping, generating shortages of auto parts and computer chips. Floods in Thailand the same year decimated production of computer hard drives.

Each disaster prompted talk that companies needed to boost their inventories and diversify their suppliers.

Each time, multinational companies carried on.

The same consultants who promoted the virtues of lean inventories now evangelize about supply chain resilience — the buzzword of the moment.

“The ability to predict what inventory you should keep is harder and harder,” he said.

Ultimately, business is likely to further its embrace of lean for the simple reason that it has yielded profits.

“The real question is, ‘Are we going to stop chasing low cost as the sole criteria for business judgment?’” said Shih, from Harvard Business School. “I’m skeptical of that. Consumers won’t pay for resilience when they are not in crisis.”