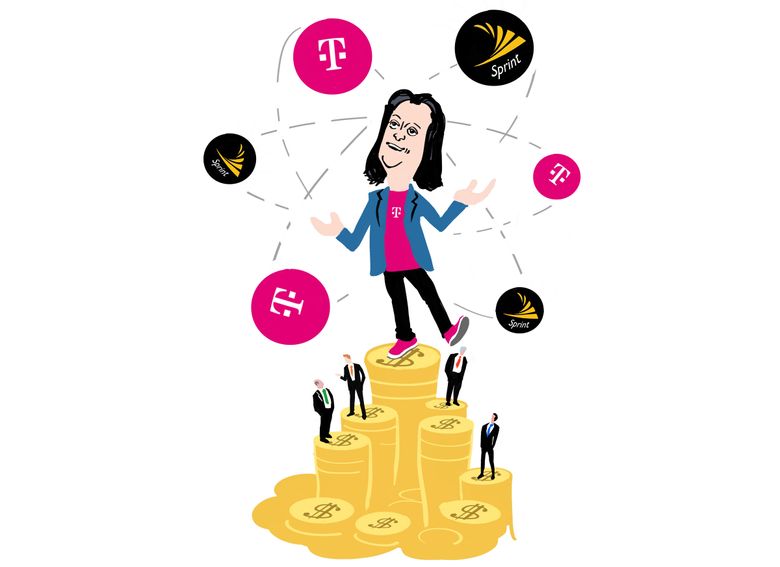 The five highest paid CEOs in the Pacific Northwest in 2018 had two things in common.

They all made a lot more money in 2018 than they did the year before — in some cases, a whole lot more.

That was certainly the case for the man who topped the list: John Legere, the flamboyant CEO of Bellevue-based T-Mobile US, who received a 2018 compensation package worth $66.5 million.

That’s nearly four times what Legere made in 2017, when he was No. 2 on the list of the 90 publicly traded companies headquartered in Washington, Oregon and Idaho, and more than double the $30.7 million made by last year’s number No. 1, Expedia CEO Mark Okerstrom.

It also makes the 61-year-old Legere, who has run T-Mobile since 2012, the sixth highest-paid CEO in the United States, right between Oracle’s Sara Catz ($108.2 million) and Disney’s Robert Iger ($65.6 million).

And, for the record, Legere’s 2018 pay was 1,116 times that of the median employee at T-Mobile. That’s more than double Legere’s 2017’s ratio, and the largest pay gap at any Northwest public companies, according to data gathered by research firm Equilar for The Seattle Times.

It may be tempting to dismiss Legere’s pay package as a regional outlier, given its sheer magnitude: It’s nearly as much as the combined 2018 compensation of the next four Northwest CEOs on the list.

But in other ways, Legere’s pay package is simply a grander version of the compensation formulas that most of the biggest publicly traded companies use to reward their top executives.

Although those formulas vary between companies and industries, they share a couple of common threads.

First, executive compensation is increasingly reliant on awards of equity — stocks and stock options — as opposed to cash salaries and bonuses.

Second, a huge portion of executive compensation isn’t actually guaranteed: the CEOs don’t get all the money cited in the companies’ proxy reports unless they meet certain performance targets or remain in the job past a certain date. But because this goal-based pay is typically announced as part of a CEO’s compensation package in a given year, it inflates that year’s pay — along with a lot of the public conversation around it.

Legere’s compensation illustrates both these elements.

Nearly 90 percent of his 2018 compensation package–$58.5 million — is in company stock, much of it in the form of one-time grants. Because these grants were officially awarded in 2018, they create the impression of a massive pay raise even though Legere isn’t actually eligible to pocket it all right away.

As David Lough, an executive compensation expert at Seattle-based Ascend Consulting, puts it, one-time awards “can launch a CEO into the top-paid group in and of themselves for a moment in the sun.”

For starters, he needs to ensure that T-Mobile’s “total shareholder return”, or share price appreciation plus reinvested dividends,  consistently outperforms that of comparable companies. That’s hardly assured, given that T-Mobile is competing against Verizon Wireless and AT&T Mobility, each of which have more than twice as many customers as T-Mobile.

That competitive challenge points to Legere’s second performance target: Just over half of his 2018 pay package is tied to his plans to merge T-Mobile with rival cellular carrier Sprint, a $26 billion deal that many experts see as essential to T-Mobile’s long-term survival.

The bad news for Legere: the proposed merger is highly controversial and faces numerous obstacles, not least a lawsuit by state regulators who fear it will lead to higher customer rates. Indeed, in its regulatory filings, T-Mobile’s board specifically refers to “the immense regulatory and advocacy work associated with a merger of this size and in this industry” to justify the scale of the pay.

The good news for Legere: Even if the merger fails, his contract says he can still get his big pay day — all he has to do is remain CEO through April of 2020, and make sure T-Mobile’s stock price continues to outperform. Such a structure, according to company filings, ensures that Legere “will be incented to refocus at that time and maximize shareholder value creation within the context of the resulting stand-alone Company.”

Critics might point to Legere’s pay package as an example of runaway executive compensation — and the way too-powerful CEOs are squeezing too much money from overly pliant company boards.

The frequency of these “mega grants” of stock has risen sharply in recent years, says Charlie Pontrelli, a project manager at Equilar. Among the 200 highest paid CEOs on Equilar’s 2018 U.S. study, five received packages that topped $100 million. In 2017, there were only two. In 2016 and 2015, there was none.

Some critics see that trend as proof of an escalating compensation “arms race” that is fueled less by executive performance than by corporate-image management.

Fred Whittlesey, another Seattle-based compensation expert, sees a “ratcheting effect” as companies to try to keep their executive compensation at or above the median of their corporate peers: “Because who wants to say, ‘Yeah, we think we have a below-average CEO, so we’re going to pay below-average’?” Whittlesey says.

But Whittlesey, Lough, and other experts acknowledge another reality: these mega packages may also reflect just how anxious corporate America is to keep its executive superstars adequately motivated.

As Lough notes, T-Mobile’s compensation committee may strongly believe that the energetic and charismatic Legere represents the company’s best hope for either finalizing the merger or finding another way forward if the deal fails. The $66.5 million package may be the board’s way of saying they see Legere as “absolutely pivotal” to T-Mobile’s survival, Lough says.

You can see this same dynamic in the compensation packages of the rest of region’s top five.

Although these executives are running very different firms in completely different industries, their compensation reflects a similar blend of precision-engineered incentives and corporate ego.

A case in point is No. 2 on the list — Microsoft CEO Satya Nadella, whose 2018 compensation package was $25.8 million, or 29 percent higher than in 2017, when Nadella held the No. 3 slot. Much of Nadella’s compensation–$16.8 million, or 65 percent — is in company shares, with another $7.4 million in a cash bonus. The amount Nadella actually receives depends in part on hitting company goals that range from revenue from the company’s commercial cloud business to Microsoft’s success at improving workforce diversity.

In position No. 3 is Clay Siegall, co-founder and CEO of Seattle Genetics. Siegall’s 2018 compensation package was $18.1 million, up 110 percent from 2017, when he was at No. 14. That may seem like a disproportionately large “raise,” given that the biotech startup was losing money at the rate of $5 million a week in 2018. But compensation experts says such largesse isn’t unusual in biotech, where investors are desperate to keep top executives motivated and focused for the years that it often takes to bring a drug to market and start generating a profit. And in recent years, Seattle Genetics has racked up several critical successes, including key regulatory approvals and a sharp increase in sales of its treatment for Hodgkin lymphoma.

Position No. 4 goes to an unexpected corporate figure: Brian Mariotti, CEO of Funko, the Everett-based toy-maker, who got a 2018 compensation package of $16.4 million. That’s around 71/2 times what Mariotti received in 2017, when he was No. 46 on the list, and it’s mainly because of a large grant of stock and options. Also, as with most stock-based awards, Mariotti’s compensation could actually shrink in value if Funko’ share price falls — a not unfamiliar experience for Mariotti. When Funko went public in November 2017, company shares immediately plunged 41 percent, to just $7.07 –“the worst first-day return for an IPO in 17 years,” according to Renaissance Capital, which tracks IPOs. Today, though, the stock is trading at around $23.

Rounding out the top 5 is Sanjay Mehrotra, CEO at Boise-based memory and data-storage maker Micron Technology, whose 2018 compensation was $14.2 million. That was actually 7.3% less than he made in 2017, in part, says Pontrelli, of Equilar, because Mehrotra, who became CEO in May 2017, got a hiring bonus equal to $9.11 million in company shares.

Boeing CEO Dennis Muilenburg: His 2108 compensation of $23.39 million would have qualified for the No. 3 position, but it was excluded from the list because the former Seattle aerospace company is headquartered in Chicago.

Brendan Kennedy: The Seattle-based CEO of marijuana merchant Tilray made $31 million in 2018 — which would have left him in the No. 2 slot — except, alas, Tilray is a Canadian company.

Any women at all. A female CEO doesn’t show up on the Pacific Northwest list until position No. 15. Tamara Lundgren at Portland-based Schnitzer Steel Industries was paid $8.98 million in 2018, a modest 4 percent more than in 2017.