This is a column about the future of downtowns in general, and downtown Seattle specifically, after normality gradually returns from the pandemic. The two are intertwined, yet also separate because of some distinctive Seattle challenges.

A national thunderclap came earlier this month when Salesforce announced a permanent work-from-anywhere policy. The cloud-based software company is the largest tenant of the tallest building in San Francisco and second tallest west of Chicago, naturally called Salesforce Tower, where it occupies 36 out of 61 floors.

This goes along with other dire pandemic predictions: An exodus of workers permanently leaving the Superstar Cities of the previous decade, with traditional offices and central business districts being made obsolete.

One reader who regularly corresponds with me on the consequences of remote work considers it the most profound change since the Industrial Revolution. 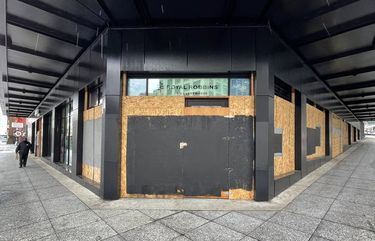 Will downtown Seattle bounce back?

Yet all is not so clear cut about what happens once we come out of this long hibernation. Google said it plans to expand its leases for offices on San Francisco’s waterfront. Even Salesforce expects 65% of its employees will commute to the office between one and three times a week.

Down in Silicon Valley, Google is moving ahead with a major campus that will transform downtown San Jose. It will consist of millions of square feet and room for thousands of employees — all close to light rail and Caltrain commuter service to San Francisco.

Meanwhile, prepandemic Superstar Boston saw some of the biggest outflows of people, but now that’s reversing as “COVID mover’s remorse” sets in.

Indeed, despite predictions of remote work forever, Big Tech is still building offices mostly in downtowns and urban areas of cities that are hubs for talent and innovation.

But banks are preparing to return to their skyscrapers, too. For example, Goldman Sachs announced that it intends to have all its staff back in its New York City headquarters by year end.

And not only the biggest cities. Christchurch, New Zealand, site of a devastating earthquake a decade ago, is busy rebuilding its central business district even as parts of its suburbs were marked uninhabitable and demolished.

Carlo Ratti, an architect and head of MIT’s Senseable City Lab, joined with Florida to enthuse on the Project Syndicate site that, “far from rendering cities obsolete, as some predicted early on, the pandemic has unlocked an ever-broader potential for renaissance — what the economist Joseph Schumpeter famously called ‘creative destruction’ on an urban scale.”

Some of this is already happening, such as Paris closing a nearly 2-mile-long boulevard to cars in favor of pedestrians and bikes (it helps to have a city with a robust subway system). Other aspects are more aspirational. For example, office towers could be turned into apartments, especially low-income housing. “One-dimensional business districts could become vibrant neighborhoods,” they write.

Another vision is the “15-minute city,” where one downtown could essentially be replaced with many. Here, “core daily activities — including working, learning, and shopping — can be carried out just a short walk or bike ride from home.”

I’m a bit skeptical of their most visionary hopes. Even Jane Jacobs’ beloved Greenwich Village circa 1961, when her seminal book “The Death and Life of Great American Cities” was first published, was not a 15-minute city. It didn’t have New York’s great museums, concert halls or hospitals, to name but a few.

I’m also skeptical that the capital can be found to retrofit office buildings into housing, at least in the near term. Property owners will consider this “an absorption problem” and live with high vacancy rates.

And creative destruction can work both ways. Interstate highways, federal subsidies for suburbia and “urban renewal” savaged the cores of American cities for decades — some ruined for good.

Even more freeways and suburbs are in place, disproportionately contributing to climate change and gobbling needed rural land. Without a realistic focus on city and downtown rejuvenation, a repeat of the urban crisis of the 1960s onward could happen. This is a particular danger if “density as a COVID vector” becomes the conventional wisdom, which studies have debunked.

Everything depends on controlling the pandemic and people feeling safe.

On the other side, the appeal of good downtowns will remain, especially for talented young people and empty-nest boomers. Downtowns continue to be the most efficient creation for gathering together business, retail, the arts, hotels, sports arenas, hospitals, transit hubs, etc.

Even if people work from anywhere, a large number will want the amenities of quality center cities. Top talent won’t be fleeing to suburban Tulsa, Oklahoma.

Anyway, the notion that most companies can effectively function via widespread remote work seems a stretch. To take an important example, one appeal of downtowns is the “creative friction” of people running into each other, trading ideas, collaborating face to face, meeting prospective clients over lunch.

Maybe I’m wrong. But it’s way too early to draw sweeping generalizations about the death or decline of urban cores. If this does happen, entire metro areas and the environment will suffer.

As for Seattle, my colleague Paul Roberts examined the dire situation this past Sunday.

Among other metrics, he reported that only one in five employees who had previously worked downtown was back at their employers’ office as of December, and downtown hotels were suffering 15% occupancy as of early this month.

The long way back is impeded by the City Council’s willingness to tolerate shoplifting and other crime, and to allow widespread camping along major downtown streets, even directly in front of busy bus stops and blocking pedestrians. Hundreds of millions of dollars spent on the “homeless emergency” has only made the problem worse.

Meanwhile, City Hall’s hostility to “big business” — upon which small businesses and the tax base depend — is a hindrance to recovery not seen in most cities.

In the past, Seattle’s genius for reinvention has always brought it back stronger. Through suburbanization, the boneheaded idea of tearing down Pike Place Market, the Boeing Bust and the Great Recession, Seattleites never gave up on downtown. They made it better, and the entire city and region benefited.

If this time is different, if this great American city dies, the pandemic won’t be the big reason why.