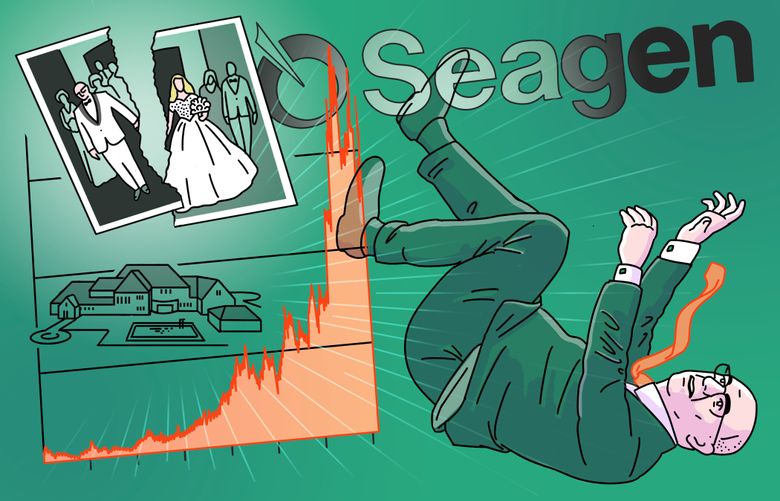 A few weeks later, on May 16, Siegall announced his resignation from the company he led for 24 years.

Siegall wasn’t shown the door due to boardroom trouble or investor discontent. Instead, his departure followed an early-morning 911 call from the Edmonds-area mansion he shared with his wife of three years, and his arrest on allegations of domestic violence. Records obtained by The Seattle Times show it wasn’t the first police visit to his Woodway home, and that officers had responded repeatedly to his California home as well.

Siegall was, by one measure, the highest-paid executive in Washington in 2020, making $16.5 million. But his departure had no noticeable impact on Seagen’s stock price. Instead, talks about a possible acquisition by pharma giant Merck brought its stock up about 31% since its first-quarter results in April.

A founding father and longtime leader of Seagen, Siegall had transformed the company, formerly known as Seattle Genetics, from a startup with $1 million in total revenue into Washington’s largest biotech corporation, which made $1.6 billion in 2021. Since then, Seagen has reportedly been in talks with pharma giant Merck for an acquisition valued at $40 billion.

Seagen made billion-dollar deals and acquired local companies under Siegall’s leadership. Its stock, which opened at $7 a share when Seagen became a public company in 2001, was trading at $178.98 on Friday.

Asked to comment on the allegations of domestic violence or discuss his departure from Seagen, Siegall declined to do so. In a statement through his attorney, Siegall described his arrest as “a private matter.”

“As much as I would like to reply to your questions, I will decline to do so at this time,” he said in the statement. His now-estranged wife also declined to comment.

City prosecutors in Woodway, where Siegall lived, have yet to make a charging decision in the April incident, in which Siegall’s wife called 911 and said he attacked her. Siegall became the focus of an internal Seagen investigation only after his arrest on suspicion of misdemeanor assault was reported publicly. 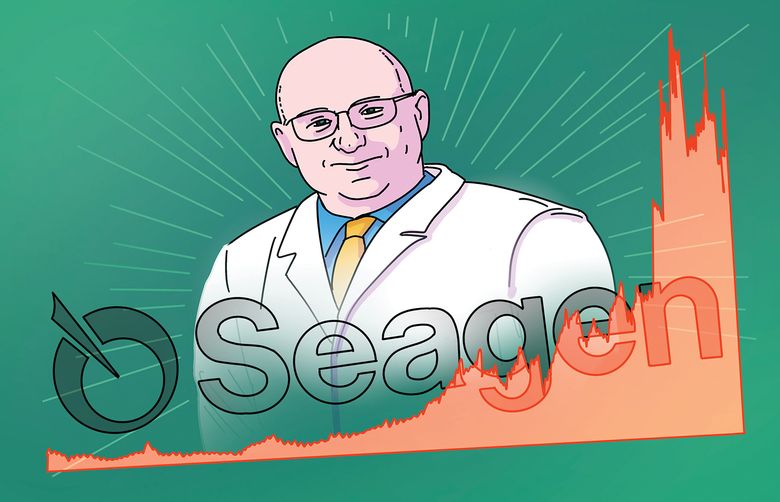 The rise and fall of Washington’s highest-paid CEO

While the CEO is often considered the face of the company, corporate boards have no obligation to monitor what executives do on their own time, unless directors believe that an executive’s private actions could harm the company, said Jennifer Fan, associate dean and associate professor at the University of Washington School of Law. That can leave board members in the dark about a brewing controversy — even one documented in public records — until it leads to the departure of an executive who has been instrumental to a company’s success.

But in some cases, CEO’s private lives spill into the public realm, prompting the board’s actions. For example, in 2005, Boeing ousted CEO Harry Stonecipher for having an affair.

Seagen refused to make any of its seven board members or its interim CEO available for an interview, and declined to say whether Siegall has been the subject of internal investigations previously. Board members did not answer requests for comment.

Police records obtained through public records requests by The Seattle Times show officers had been called on Siegall four times in Washington since 2019. The police were called to his California home four times in 2021.

While the 911 calls didn’t receive publicity, his private life made the news in 2014. Far from a household name, the CEO landed in The New York Post gossip pages that year following allegations levied during a biotech investment banker’s divorce that the men had used cocaine together.

Seagen is one of Washington’s 20 largest companies by revenue. Siegall showed up at charity events for cancer awareness and research and, having led one himself, provided mentorship to biotech startups.

The company said it relied on Siegall and his leadership, and hired security for his Woodway home “because of the importance of Siegall to the company,” according to Seagen’s latest proxy statement filed with the U.S. Securities and Exchange Commission. Seagen said in previous SEC filings that Siegall’s “scientific understanding along with his corporate vision and operational knowledge provide strategic insights to our Board of Directors.”

Siegall’s run-ins with police escaped public notice, until the April night when Woodway police cars rolled up to his secluded chateau-style house in a gated community in the wealthy Edmonds suburb. Siegall had, officers would later allege, physically assaulted his wife.

Siegall lives a luxurious lifestyle. He has had a Ferrari and owns a seven-dishwasher waterfront mansion in Woodway. He flew private, sometimes paying out-of-pocket for his wife’s trips on a company-paid private flight, according to an SEC filing.

Siegall’s 2016 purchase of the home for $8 million was the most expensive home sale in Snohomish County that year, and the home is now valued at $9.5 million, according to Zillow. He has a second $9 million-dollar home in the resort city of La Quinta, California.

Throughout his tenure as CEO, Siegall had one blip of bad publicity: the 2014 New York Post item alleging he used cocaine with Jefferies biotech banker Sage Kelly. At the time, Siegall said the allegations, levied by Kelly’s ex-wife as part of a court case, were “baseless and absurd. I have never used cocaine in my life.” Kelly also denied the accusations.

In cases such as the 2014 cocaine-use allegations, each company’s board of directors can choose what actions to take, UW’s Fan said. Seagen did not say whether it conducted an investigation on his alleged drug use and its impact on the company.

The 911 calls and allegations of domestic violence came later, during Siegall’s marriage to a woman he started dating in 2014 and married in 2019, court documents show.

Siegall’s wife, now estranged, has filed for divorce and for a court order prohibiting Siegall from contacting her. In statements to the court made in both matters, she described Siegall as erratic and abusive, and prone to cause a scene in public. The Seattle Times is not publicizing her name because she is a purported survivor of domestic violence.

Siegall said in a motion filed in court on July 15 that her petition has no concrete proof except for “hearsay police report statements.”

The night before their wedding, the couple had such a loud fight in their hotel that security was called, the woman said in a statement filed May 2 in support of a temporary protection order.

One month after the wedding, on Aug. 10, 2019, she called 911 for the first time from their Woodway home. According to police records, Siegall’s wife said Siegall had yelled at her, but that she was “fine, I just wanted that recorded.” The woman said that Siegall was upset at her for going to bed early. Siegall told police that he would write his wife a monthly check of $10,000, and she had asked him to come back earlier from work to ask for more money.

“I made a bad mistake marrying her one month ago as she only wants money and not me,” Siegall wrote in a handwritten statement to police.

The couple filed for a divorce in early February 2021, but reconciled five months later. That year, police received two 911 calls related to the couple’s home in Washington. The police also received calls to their home in California, though the nature of the calls could not be verified because the Riverside Sheriff’s Department, which polices La Quinta, denied requests to access the individual dispatch records, citing California public-records laws.

Siegall’s wife complained on one occasion that he’d locked her out of their Woodway home, and on another that she returned home to find one of her bikinis cut to pieces.

Around 3:30 a.m., she called 911 saying her husband had “pushed her to the floor and videotaped everything,” according to the audio call. She then attempted to withdraw the complaint and asked the dispatcher to erase the recording.

“He’s going to kill me if he finds out I called,” the woman said according to the 911 call. “He’ll go crazy, he’s a public person.”

The night of the incident, Siegall and his wife had been out at the Charcoal restaurant in downtown Edmonds with another husband and wife. All four returned to the Siegall home.

According to police statements, Siegall told officers the two women had been having sex in front of the men before retiring to a bedroom, and claimed he forced a door open to retrieve his clothes. The other man offered a different account, telling a Woodway officer that all four of them had been involved in sexual relations.

When police arrived at the Siegalls’ home, Siegall’s wife initially declined to speak to the police. Officers described the woman and Siegall as intoxicated. She appeared injured, according to police reports, and later described injuries to her forehead, neck, chin, rib cage, wrist, legs and hips in a statement included in an application for a temporary protection order against Siegall.

While police were at the Siegall home, the other husband called 911 and told police he saw the incident.

“The guy’s a billionaire, he’s going to get away with it,” he told the 911 dispatcher, according to the call audio acquired by The Seattle Times through a public-records request.

Siegall, who police say was asleep when they arrived, was arrested and released the next day. On the ride to jail, Siegall complained that his wife only wanted him for his money while denying any wrongdoing, according to police records.

Six days after the incident, Siegall’s wife re-filed divorce papers. In a request for a temporary protection order, she said the incident was not the first time her husband had attacked her.

“I have also been subjected to emotional and psychological abuse and financial control and abuse,” she wrote. Siegall denied all allegations against him.

Since Siegall’s resignation, the company has reportedly been in talks with pharma giant Merck to be acquired for $40 billion. Seagen Chief Medical Officer Roger Dansey has taken over as interim CEO while the company searches for a replacement.

Siegall’s severance package includes 1.5 times his salary and annual bonus, according to an SEC filing, payable in March. Siegall said he will cooperate with the internal investigation, which is ongoing, until Dec. 31.

In response to questions about Seagen’s response to the allegations about its former CEO, the company said in a statement it “has a robust Code of Conduct that sets forth the standards that we expect every leader and employee to uphold.”

After Siegall left, board member Felix Baker took over as chair. Baker, the billionaire co-founder of hedge-fund firm Baker Brothers Advisors, and his companies own over a quarter of Seagen’s shares. Seagen refused to make Baker available for an interview, and Baker did not answer requests for comment. He is leading the investigative committee on Siegall’s conduct.

For investors, Seagen’s management is strong enough that Siegall’s resignation does not drastically affect its performance, said Morningstar analyst Rachel Elfman. And Seagen’s first and second quarters were strong.

In cases involving alleged bad behavior by the CEO, it is rare for shareholders to react negatively, according to a Stanford study that analyzed 38 companies’ responses to a CEO’s bad behavior. “There is no discernible relationship between the type of behavior and stock price reaction,” the study read.

Seagen’s Code of Conduct, updated in this year, says that leaders should set an example by, among other actions, “doing the right thing yourself.”

An earlier Code of Conduct featured a photo of Siegall next to prompts such as, “Could my action create an appearance of impropriety?” The same questions appear in an updated guide. Siegall’s picture or any references to the former chief executive had been removed.

Editor’s note: The comment thread on this story has been closed because too many recent comments were violating our Code of Conduct.