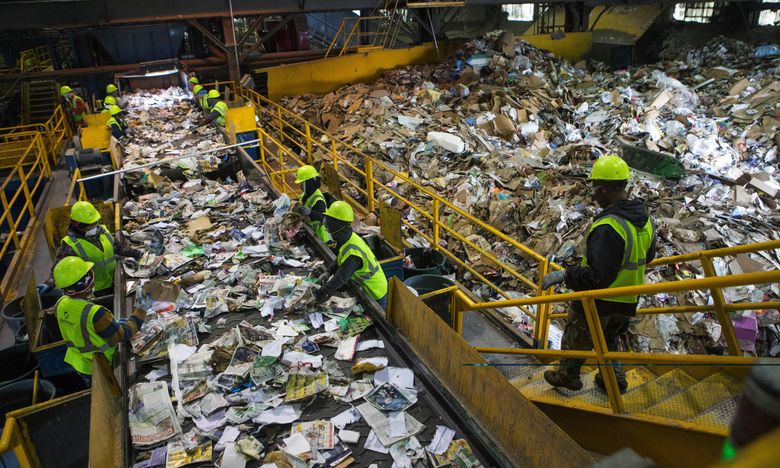 China is sharply restricting imports on recycled materials, and the effects are rippling across the Pacific Northwest. Some of those discards might end up in the region’s landfills as China rolls out new rules in January.

Big changes are ahead for Northwest recyclers that have long depended on shipping low-value materials to China, where manufacturers re-use the paper, plastics and scrap metal to make boxes, cans, cellphone cases and many other products.

Some of those materials now may end up in the region’s landfills as China rolls out new rules in January that ban imports of 24 types of recyclables and sharply restrict the amount of contamination in other imported waste materials, which is expected to increase processing costs in the U.S.

In Seattle, recycling of about 60 percent of municipal solid wastes this year has earned a thin profit. But China’s shift threatens to slash that revenue if the markets are swamped by material that can no longer be shipped off to the world’s largest importer of recycling materials.

“It’s a significant area of concern for all of the industry,” said Hans Van Dusen, solid-waste-contract manager at Seattle Public Utilities, which offers recycling as a free service to city residents while charging for garbage removal.

Last year, recyclers shipped to China through the ports of Seattle and Tacoma more than 790,000 metric tons of such materials — equivalent to more than 238 pounds of recyclables from every person in Washington.

China’s new rules are part of a broader overhaul of its recycling industry, which has long operated under more lax environmental regulation than in the U.S.

Already, U.S. recycling companies that sort and market all these materials in Washington and other states are scrambling to prepare for an uncertain era when some materials — such as the ubiquitous clamshell plastic containers for grocery-store baked goods — will no longer be welcome in China.

“There’s a lot we have to figure out, and we’re trying to give everyone a heads up,” said Brad Lovaas, executive director of the Washington Refuse & Recycling Association, which says the statewide industry has a $1 billion payroll.

To retain as much of the China market as possible, U.S. recycling companies also are pushing to dramatically improve the cleanliness of baled paper and other products.

In recent years, food waste and other contaminants might represent 3 to 5 percent of what is contained in the final bales of materials that have gone through sorting in the U.S., according to Lovaas. China wants that rate reduced to far below 1 percent by Jan. 1, and any shipments that don’t pass muster risk rejection.

Lovaas said that means recyclers are having to slow down their sorting lines, making processing more expensive at a time when markets are weak. Even then, he said, some companies — particularly smaller operators — don’t expect to be able to meet the new Chinese contamination standard and will have to send materials to landfills for lack of alternate markets.

Problems already have flared in Oregon, where state law prohibits landfills from taking any materials that can be profitably recycled. The state Department of Environmental Quality has received requests to allow such disposal, and more are expected in the weeks ahead.

In Seattle, things appear relatively calm so far. One major recycler, Republic Services, predicts — at least in the short term — no major disruptions.

“We are taking additional steps … to ensure that the quality of the product we ship is in line with the new specifications,” said Russ Knocke, a vice president of Republic, which handles curbside recycling in Seattle, Bellevue and other Puget Sound communities.

Republic sorts curbside recyclables at a massive facility in Sodo. Some is put on trains headed for U.S. manufacturers, and some on containers for overseas shipments.

The sorting is accomplished through a mix of agile workers with quick hands, and technology — such as magnets that grab metal, and optical sensors that trigger puffs of air to lift plastic bottles off the line.

Republic has stepped up inspections of recyclables as they arrive and are spread on a floor. At the end of the sorting lines, there are increased spot checks of the bales ready for market.

In a region long known as a stronghold of the recycling movement, Republic also is hoping for more help from residents as they fill curbside bins. A ketchup bottle, for example, should be empty, briefly rinsed and air-dried before getting tossed into a recycling bin — otherwise it might dribble and contaminate a lot of other stuff in the bin.

“If you remember empty, clean and dry, you are helping to improve what goes into the (recycling) stream,” Knocke said.

Some consumers might also want to think about reducing their recycling footprint, according to state Ecology Department officials. Rather than buy cut fruit in a plastic container, for example, select whole fruit and slice it up yourself.

In Seattle, once the recycling bin is emptied into a collection truck, the waste becomes the property of Seattle Public Utilities. The city pays Republic Services a processing fee and then receives market prices for all the material once it is sold.

This year, the operation has produced $6.5 million in revenue with costs of $6.2 million, according to Van Dusen.

Van Dusen said the plastics that will be banned in China represent less than 2 percent — by weight — of the recycling stream from curbside bins. And no changes have been made to Seattle’s sorting rules for residents.

But in the months ahead, sales of the recycled materials will likely yield less cash for the city. The market price for mixed paper, for example, has dropped by more than 50 percent since September, according to Van Dusen.

“We fully expect that it will be lower,” he said about revenue from recycled materials.

Even if the curbside recycling operation ends up in the red, Van Dusen expects the city still will come out ahead. That’s because sending all the recyclables to a landfill would cost $4.5 million in disposal fees.

What’s in the ban

The Chinese restrictions result from a more aggressive approach to regulating an often-dirty recycling industry that thrives on imports and the even greater volumes of materials generated in-country.

China’s recycling industry includes legions of small operators who sort, grind and then melt plastics into pellets to be used by manufacturers. This resulted in big water and air pollution problems in places like Wen’an County in Hebei province, where the government shut down operators in 2011.

Two years later, the Chinese government launched “Operation Green Fence” to step up inspections of waste imports. In July, the campaign picked up momentum as the World Trade Organization was notified of the restrictions.

The Chinese import ban includes five types of plastics — identified as numbers 3 through 7 on most containers. The ban also covers a potpourri of other items such as cotton wastes, animal hair and scrap twine.

Chinese manufacturers are unhappy about losing the imported materials, which often are cleaner than streams of recyclable wastes generated inside the country.

U.S. recyclers, too, are hoping China will rethink the ban and ease the restrictions.

Goldstein, the University of Southern California researcher, said there could be some tweaks to the rules, but he doesn’t expect any major retreat.

“I think that the day of sending low-value plastics to China for recycling is over,” Goldstein said.