An intensive investigation by a U.S. House committee into the causes of the two Boeing 737 MAX crashes reveals new details documenting what a final report calls “a disturbing pattern of technical miscalculations and troubling management misjudgments made by Boeing,” along with “grossly insufficient oversight by the FAA.”

He called it “mind boggling” that the MAX, which had two crashes that killed 346 people within five months, was originally certified by both Boeing and the FAA as compliant with all safety regulations.

“The problem is, it was compliant and not safe. And people died,” DeFazio said, “Obviously the system is inadequate.”

The report says Boeing engineers at various points during development of the MAX raised questions about all the critical design elements of the flight control software that later led to the crashes — the Maneuvering Characteristics Augmentation System (MCAS).

It cites internal Boeing memos and emails in which engineers asked about the system being triggered by a single sensor, about the potential consequences of a faulty sensor, about how repetitive MCAS activations might affect the ability of pilots to maintain control, and about whether pilots would react in time if MCAS was triggered erroneously.

“Ultimately, all of those safety concerns were either inadequately addressed or simply dismissed by Boeing,” the report states.

Nor did Boeing flag these issues to the FAA. The report documents four instances when Boeing engineers delegated to work on behalf of the safety regulator during the MAX’s certification “failed to represent the interests of the FAA.”

DeFazio said that in February 2019, after the crash of a Lion Air MAX jet but before the Ethiopian Airlines crash, Ali Bahrami, FAA associate administrator for aviation safety, told him the accident was a “one-off” and that “there’s no problem with that plane.”

Read the House Transportation Committee’s full report on “The Design, Development and Certification of the Boeing 737 MAX”

Yet DeFazio said that, based on a seven-hour interview with Bahrami by committee investigators last December, it appeared the FAA’s head of safety “really didn’t know much of anything about the MAX or its development.”

DeFazio said the majority Democrats on the committee have been in discussions for weeks with the minority Republican members over “legislation to make sure this never happens again.” 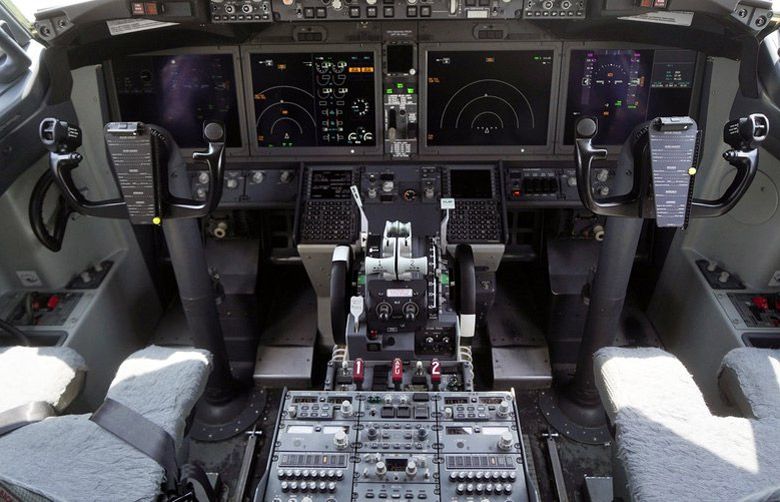 The Senate’s Commerce Committee is likewise considering this week a bill to strengthen the airplane certification process.

Rep. Rick Larsen (D-Everett), chair of the Aviation Subcommittee, said the Boeing workers he represents are distraught at the MAX tragedies and that legislators “really do need to act.”

“We’re optimistic we can work it out,” DeFazio said.

The report describes how Boeing “failed to classify MCAS as a safety-critical system, which would have attracted greater FAA scrutiny during the certification process.”

At a meeting documented in a June 2013 email, Boeing officials agreed to diminish focus on MCAS as anything novel “in order to avoid increased costs, and greater certification and training impact.”

The report deems it “inconceivable and inexcusable” that the jetmaker concealed from the FAA internal data from development tests that would have flagged MCAS as critical to safety and potentially dangerous.

Very early in the development of the MAX, according to a newly revealed email exchange, Boeing stability and control engineers in November 2012 discussed how the danger from MCAS misfiring should be classified in certification documents and, critically, how much time it would take pilots to react to such a misfiring.

They noted that in a flight simulator test, while one pair of Boeing technical pilots took four seconds to properly respond to an uncommanded MCAS activation, a second crew in another simulator test took more than 10 seconds and judged the failure scenario to be “catastrophic.”

One engineer then asked if “with pilot training/knowledge of the system there will be a sufficiently quick response” so that the danger is classified as “hazardous,” or “should we step up to catastrophic, with the assumption that not all pilots will recognize quickly enough?”

Six separate Boeing engineering memos discovered by the investigation, including one from June 2018, just five months before the Lion Air crash, reiterated this point that a “slow reaction time” of more than 10 seconds would be catastrophic.

Yet the investigation found no evidence that any of the four Boeing technical experts assigned to be representatives of the FAA who knew about this 2012 simulator test failure informed the FAA.

Boeing went forward with the assumption that with teamwork between two trained airline pilots on the flight deck, a recovery response would be completed within four seconds — and that’s what Boeing presented to the FAA in its formal System Safety Assessment as part of MAX certification.

Another new document reveals that in a June 2016 flight test, the Boeing test pilot had trouble completing a slow speed test needed for certification because MCAS kept kicking in.

Engineers noted how MCAS was “observed ratcheting” up the angle of the horizontal tail with repeated activation. Another engineer in the email exchange asks “What happens when we have faulty Angle of Attack”?

In a meeting on March 30, 2016, Keith Leverkuhn, the Boeing vice president who headed the MAX program, formally approved an expansion of MCAS to allow it to activate at low speed.

This required removing what had previously been a necessary activation trigger for the software — a high G force. From that point on, MCAS was activated solely by a high angle of attack and was given more authority to move the horizontal tail.

It was on that same day that Boeing chief technical pilot Mark Forkner requested that the FAA remove all mention of MCAS from the pilot flight manuals.

Investigators found no evidence that Forkner knew then that MCAS had been broadened in scope and made more powerful. They did establish that the FAA official who approved Forkner’s request to delete MCAS from the manual certainly had no idea.

The House investigation had earlier unearthed the controversial internal emails from Forkner in which he described “Jedi mind tricking” airline customers to convince them they didn’t need simulator training for their pilots.

The final report notes that in September 2016, Boeing granted Forkner and his team of technical pilots an award for their role in developing the pilot training and ensuring that this did not require sessions in a flight simulator.

Released almost two years after the first crash of a Boeing 737 MAX in Indonesia, and 18 months since the MAX was grounded following a second crash in Ethiopia, the report delivers the most damning indictment yet of both Boeing’s development of the jet and the FAA’s oversight.

The investigation, run by the Democratic staff of the House Transportation Committee, has proved the most aggressive of a slew of MAX inquiries.

In a series of five contentious public hearings, DeFazio and Larsen hauled in former Boeing CEO Dennis Muilenburg and FAA chief Steve Dickson to testify, in addition to various whistleblowers and experts.

The minority Republicans on the committee took a markedly softer line in the hearings and in private questioning of Boeing executives. But the Democratic committee members set the pace and turned up evidence from an estimated 600,000 pages of records to back its conclusions.

New documents released by the House committee investigators include a transcript of the investigators’ December 2109 interview with FAA safety chief Bahrami.

The transcript shows that at the beginning of the interview an FAA lawyer complained that Bahrami had not been given a detailed list of the material to be covered during the interview and to expect that his “recollection of the documents or issues you raise is limited.”

Bahrami told the investigators he was unaware of information that had been made public at a Committee hearing five weeks earlier: the Boeing simulator test in which a pilot had taken 10 seconds to respond to MCAS, with a “catastrophic” outcome.

Bahrami also was not familiar with the details of a December 2018 FAA risk analysis after the Lion Air crash that predicted 15 more fatal accidents over the lifetime of the MAX fleet if MCAS was not fixed.

The report concludes that senior FAA leaders are “overly concerned with achieving the business-oriented outcomes of industry stakeholders and are not held accountable for safety-related decisions.”

In a statement, the FAA said it “looks forward to working with the Committee to implement improvements identified in its report.”

The scope of the report sweeps well beyond the details of the specific failings that led to the MAX crashes to posit a lengthy deterioration of Boeing’s culture.

It reaches back 16 years to cite former CEO Harry Stonecipher — after he joined the leadership following the 1997 merger with McDonnell Douglas — boasting that he deliberately shifted Boeing’s longtime culture “so it’s run like a business rather than a great engineering firm.”

It notes that between 2013 and 2019, the critical years of 737 MAX development, Boeing spent $60 billion on shareholder dividends and stock buybacks, an investment strategy that “may have played key roles in Boeing not spending enough money on issues critical to the safe design and development of the MAX.”

“Multiple current and former Boeing employees who have contacted the Committee since our investigation began have relayed dismay at the path they believe Boeing has taken” since the merger, the report states.

At the end of the report, the committee observes that although Boeing has implicitly acknowledged the flaws in MCAS through its actions — re-designing the system so it’s not triggered by one sensor, doesn’t reactivate repeatedly and has limited authority — it continues to avoid explicitly admitting that there were any design flaws.

Instead, Boeing has repeatedly said its only mistake in the MCAS design was incorporating the standard industry assumptions regarding pilot response times, which proved wrong in real life. This formulation indirectly blames the pilots on the crash flights.

“Boeing does not appear to have fully accepted the lessons from the MAX accidents or taken responsibility for design errors,” the report states. “Without that recognition it is hard to believe that Boeing will make the changes necessary to improve its safety culture.”

Boeing in a statement said it has “cooperated fully and extensively with the Committee’s inquiry” and that it has been “hard at work strengthening our safety culture and rebuilding trust.”

The 737 MAX with a fix for MCAS and other changes is on the verge of being recertified. FAA approval could come as early as next month for the jet to fly again.

Javier de Luis, whose sister Graziella de Luis died in the Ethiopian crash, said via email that the report “painstakingly lays out the failures by Boeing and the FAA that led to the loss of 346 lives.”

“It is distressing to read about the errors, the program pressure, and regulatory failures,” said de Luis, who has a Ph.D. in aerospace engineering from MIT. “This is not the way we’re supposed to do things.”

He is disturbed by the report’s transcript of the interview with 737 MAX boss Leverkuhn, who stated he doesn’t consider the development of the MAX a failure.

“That statement is jaw-dropping in its hubris,” de Luis wrote. “If 346 deaths in a brand new airplane is not a failure, then what is?”