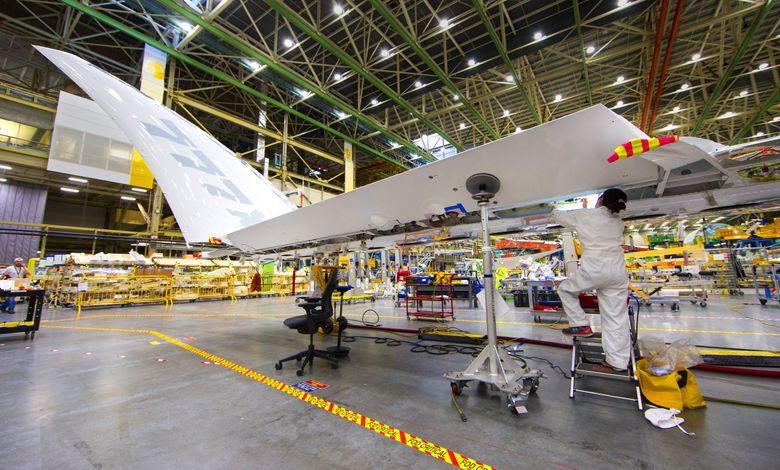 Wing mechanics work under the new 777X carbon fiber wings, the largest wings on any Boeing jet. The 11-foot wingtip folds up so that the 777X fits into all the same airports as today’s 777. (Mike Siegel / The Seattle Times)

Inside Boeing’s Everett assembly plant, the first 777X flight test plane is all but complete. Engineers and mechanics are preparing to roll out this majestic jet for its public debut as early as February. We got an advance look.

While most airplanes look much the same to harried air travelers, early next year Boeing’s newest jet may manage to catch and arrest even the casual eye.

Passengers about to board will see its long, long carbon-fiber wings arc up and away from low on the fuselage, gull-like, then curve downward to the tips. There the wings will end in what will surely be the iconic image of this plane: scythelike wingtips painted with a 777X and folded upward so the jet fits at the airport gate.

Hanging from the wings will be the most gigantic jet engines anyone has ever seen.

Behind the big doors of Boeing’s Everett assembly plant, Jason Clark, vice president of operations for the 777, gestured toward the all-but-complete 777X flight-test plane, the first of its two engines newly hung on the left wing, the tips folded up so as not to hit the factory walls.

“That’s the first airplane we’ll take into the sky,” said Clark. “In the next few weeks, we’ll be bringing the airplane to life.”

Engineers and mechanics are preparing to roll out this majestic jet for its public debut as early as February. It’ll fly for the first time a month or two later. Days before Christmas, Clark gave The Seattle Times an advance look.

This first plane, a 777-9X model, is 252 feet long. When those 11-footlong tips are unfolded for flight, it has a wingspan of 235 feet. That makes it longer and with a larger wingspan than the latest 747 jumbo jet.

Already, the power is on. Its giant airframe is complete. The primary systems are installed. The second of its immense GE-9X engines will be hung early in the New Year.

Now it’s mostly in the hands of the flight-test engineers and mechanics, busily installing the water barrels used for ballast during flight tests and the computer racks and special wiring unique to the test planes that will record every data point during the tests.

The first of any new airplane model comes together slowly, and usually with lots of teething problems. When Boeing joined together the first big fuselage sections of the 787 Dreamliner in 2007, the fit was so out of alignment in places that employees could stick their fingers through the gaps.

But Boeing seems to have absorbed the hard lessons of the early 787 production nightmare and that jet’s more than three years of delays. The 777X is on schedule and Clark is beaming.

Construction of the two planes for ground testing and the four flight-test planes is well advanced. The wings of the follow-on 777Xs, the first to go to airline customers, are under assembly.

“We’re through all the big teething elements,” he said. “This airplane is coming together very well.”

The new stretched 777X is set to replace the 777-300ER, an all-metal airplane that has long been Boeing’s star widebody airplane. Typically carrying 350 to 400 passengers, it’s essential to the fleets of most top long-haul international carriers, including Dubai-based Emirates and Singapore Airlines.

This first of the new models, the 777-9X, is the larger of two planned versions. It will have three extra rows of seats and carry 400 to 425 passengers. While similar in weight to the -300ER, it’s more fuel efficient and flies 250 miles further, giving it an 8,750-mile range.

That performance comes from the enormous new fuel-efficient GE engines and the new super-aerodynamic wings.

In flight, these slender wings, with the tips unfolded and locked into place, will bend dramatically because of the carbon-composite material and will curve gracefully upward like those on the Dreamliner.

Listed for sale at $426 million, the real purchase price of a 777-9X with typical discounts is estimated by aircraft valuation firm Avitas at around $200 million, making it Boeing’s most expensive airplane.

To win the 777X manufacturing work, Washington state in 2013 agreed to grant $8.7 billion in aerospace tax breaks over 16 years, and the Machinists — after a bitter struggle that winter — were forced to sign a long-term labor contract that froze their traditional pensions.

Washington’s reward for those concessions is the new, highly automated 777X production system within the Everett factory. Boeing doesn’t disclose how many employees are working on the 777X.

Over the past two years, to prepare for 777X and to work the kinks out of the process early, Boeing has already transformed production of the regular 777.

To build the metal-fuselage sections in a nearby building, Boeing introduced a new robotic system that was initially a source of multiple quality flaws and rework.

“That was really hard,” said Clark. “I didn’t get any younger during that project.” But it’s now running at the required rate with few unfinished jobs spilling downstream into the final assembly process, he said.

To avoid disrupting production of the regular 777, Boeing is building the first of the new 777Xs — which come together much more slowly — in a separate, adjacent assembly bay, dedicated as a “low-rate, initial production” or LRIP line.

The assembly process is entirely new.

A new robotic system for assembling the 777X’s carbon-fiber wings, designed and built by Electroimpact of Mukilteo — and very similar to the A350 wing assembly line that Electroimpact built for Airbus in Broughton, Wales — is now, after what Clark called “a bit of a rough start,” working as planned and producing wings.

Just before Christmas the wings for the first two aircraft that Boeing will deliver to customers, No. 7 and No. 8 in the manufacturing lineup, were being assembled in the Electroimpact wing stations.

Once the basic wings are assembled, all the wing systems — the wiring, the hydraulics and the control surfaces — are installed in a new way, on the assembly floor before they are attached to the plane, rather than after.

At these stations on the production floor, almost all the work is done manually. Mechanics perform intricate jobs, such as adding the movable trailing edge so that its panels are perfectly flush with the main wing panel to ensure a smooth air flow.

After that, the process becomes highly mechanized again, with automated guided vehicles and computer-controlled mobile jacks moving wings and fuselage sections and lifting them into place.

Boeing will build the first 20 or so 777Xs on this LRIP line before, in a couple of years, its engineers switch all the flexible equipment, including the Electroimpact wing assembly cells, over to the adjacent main 777 bay so that one line will do both 777s and 777Xs.

The 777X will fly for the first time a quarter century after the original 777 model’s debut in 1994.

Against tough competition from the all-composite, slightly smaller Airbus A350-1000, Boeing is depending on the 777-9X to maintain its dominance in the large widebody jet category.

Production is swinging. The robots are riveting fuselages. The guided vehicles are gliding parts around the factory floor. The mechanics are finishing wings and joining sections.

That first plane sits in the final station, waiting for the factory door to open, the trial of flight tests to come.

This spring, it will be an impressive sight in the sky.