The first Boeing executive head to roll as a result of the ongoing 737 MAX crisis is that of Kevin McAllister. The Boeing board decided to fire him as boss of Boeing Commercial Airplanes at a board meeting Monday in San Antonio and disclosed the move Tuesday.

McAllister was replaced immediately by Stan Deal, chief executive of Boeing’s services division and formerly a longtime executive within the Seattle-area commercial jet division. On Tuesday at the division’s headquarters at Longacres, where the move came as a surprise, Deal was already installed.

A senior Boeing executive with knowledge of the deliberations, who asked for anonymity because of the sensitivity of the issues, said McAllister was fired for a combination of negative developments “on his watch.”

The major issue has been the grounding of the 737 MAX and the constant pushing out of its return to service as Boeing has struggled to meet the demands of international regulators. As a result, Boeing’s stock has lost one-fifth of its value since the second MAX crash in March. 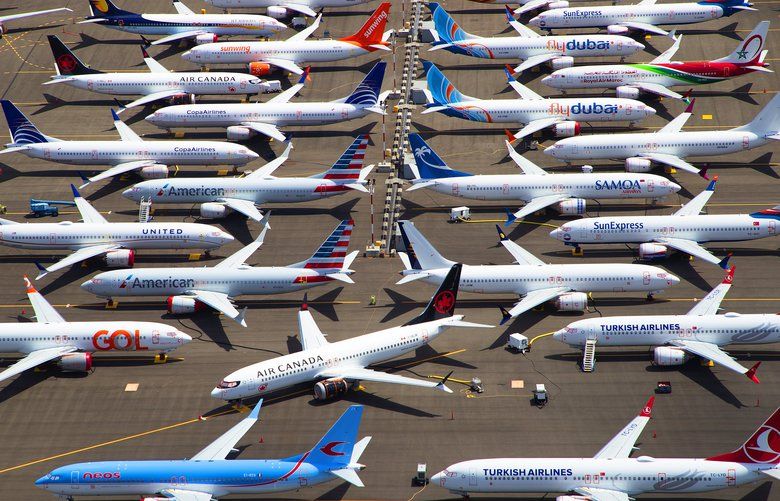 The senior executive cited other issues, including the 777X engine problems that have pushed first flight into next year and the recent blowout of a door that happened during ground testing of that jet. Another factor, he said, was this month’s discovery in older 737s of cracks in the so-called “pickle fork” structure connecting the wings to the fuselage — although it’s difficult to see how McAllister is responsible for faults in airplanes built long before he got there. And the shrinking backlog of the 787 Dreamliner is also a concern.

When McAllister arrived at Boeing exactly three years ago, his immediate priority was to work toward the launch of the jetmaker’s next all-new airplane that was to become the 797. On the drawing board was a concept called the New Midmarket Airplane (NMA), a jet with a size and range in between the single-aisle 737 and the twin-aisle 787 Dreamliner.

Also of prime importance was to get the new 777X in the air, flight tested and delivered to customers.

Those ambitions have been derailed.

The 777X is delayed by the engine and other problems. Sales of the smaller model, the 777-8X, have not materialized and production of that model has been pushed out. Meanwhile, it’s possible launch customer Emirates may cancel some of its large 777X order next month at the Dubai Air Show.

And the MAX crisis has pushed the NMA decision into the future. Deal may have to radically revise that product strategy after the MAX is back in service.

McAllister, 56, originally a materials engineer, joined Boeing in 2016 after he’d spent 28 years at GE. He was the first outsider appointed to lead Boeing’s commercial jet division. Boeing executives who had worked with him at GE knew him as less of a people person than “a math guy” who made decisions after carefully running the numbers.

Since the crash of a Lion Air 737 MAX a year ago triggered the crisis that led in March to the grounding of the worldwide fleet, McAllister’s boss in Chicago, Dennis Muilenburg, has taken the lead on all public statements about the MAX and McAllister has said remarkably little in public.

One of his few comments came in an email to The Seattle Times ahead of the Paris Air Show in June, when he said he was going through “the most trying time I have encountered in 30-plus years in this industry.”

On Tuesday, Muilenburg said in a statement, “We’re grateful to Kevin for his dedicated and tireless service to Boeing, its customers and its communities during a challenging time, and for his commitment to support this transition.”

David Calhoun, who took over as Boeing chairman when the board stripped Muilenburg of that role this month, said, “the Boeing board fully supports these leadership moves.”

“Boeing will emerge stronger than ever from its current challenges and the changes we’re making throughout Boeing will benefit the flying public well into the future,” Calhoun said in a statement.

In a parting message in the press release, McAllister said, “Boeing is a great company with a commitment to safety I have seen firsthand.”

In Boeing’s annual disclosure of executive compensation in March, McAllister — though head of the division that pulled in two thirds of total company profits — was not listed because he was not among the five highest-paid executives.

A filing at the end of February showed McAllister then owned 125,595 Boeing shares, today worth more than $42 million. However, 100,000 of those shares, awarded to him when he joined the company, are not yet vested. Boeing did not disclose the financial terms of his departure or whether he would retain those shares.

Deal, 55, joined Boeing in 1986 after earning a Bachelor of Science degree in aerospace engineering from the University of Illinois.

He has led the Dallas-based Boeing Global Services division since it was created in July 2017. Before that he spent most of his Boeing career at the commercial jet unit in the Puget Sound region, where he led the Commercial Aviation Services unit and before that the Supplier Management organization.

McAllister’s may not be the last Boeing head to roll as a result of the MAX crisis. CEO Muilenburg is under intense scrutiny, and the senior executive said his performance when he testifies before Congress on Oct. 30 will be pivotal in determining his future.

In that testimony, Muilenburg expects to affirm the MAX’s return to service before year end, the executive said.