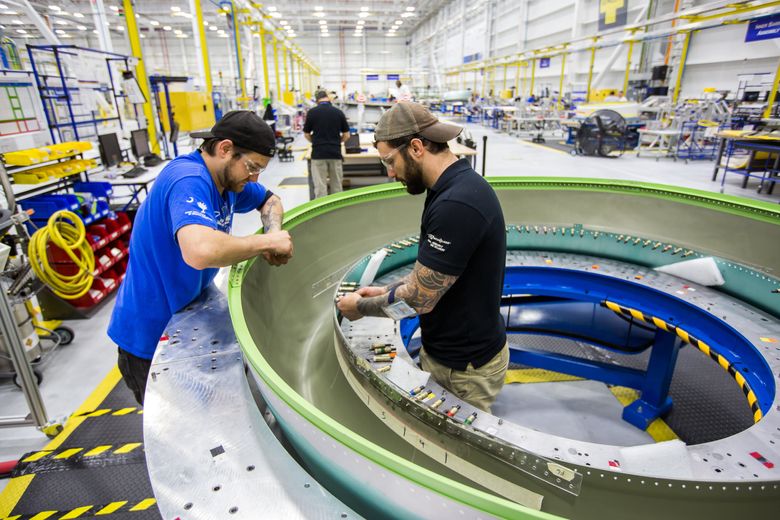 At Boeing South Carolina, a lip skin from supplier GKN is worked on by Boeing propulsion mechanics Kevin Tierney, left, and Larry Steel, who are assembling a 737 MAX nacelle inlet. (Mic Smith / Special to The Seattle Times)

The North Charleston complex, once a problem child, has grown into a capable operation with cutting-edge technology and a role in engineering, not just manufacturing. Its profile as both rival and collaborator for Boeing’s Puget Sound plants is rising with each new mission.

NORTH CHARLESTON, S.C. — On the way home from his job at Boeing South Carolina, a young engineer stops to explain why he moved last year from the company’s Puget Sound operations to this rising counterpart in the South.

“I sensed the writing on the wall in Seattle, that most of the opportunities would be here,” the engineer says.

On his company polo shirt, the slogan “Made with Pride in South Carolina” hints at the positive profile Boeing has developed here.

“When I’m out wearing this shirt, people ask me how to get a job at Boeing,” he says. “They’re excited.”

The South Carolina site, which last month delivered its 100th 787 Dreamliner, has expanded from manufacturing the 787 to designing and producing parts for the 737 MAX and the forthcoming 777X. It now boasts a growing research center with nearly 400 engineers doing work that was moved from the Puget Sound region.

The site is a vital supplier to Boeing’s Washington state plants, with every 787 assembled in Everett including huge sections of fuselage from North Charleston.

Yet South Carolina is also a rival for future work.

The Puget Sound-area unit of the International Association of Machinists (IAM) union points to South Carolina’s requirement that Boeing add jobs there in return for state incentives.

“As Boeing creates capability and capacity elsewhere, the fear is it diminishes our chances when we compete for the next airplane,” said IAM District 751 President Jon Holden. “As long as we are the only state that doesn’t require jobs in exchange for incentives, Boeing is going to continue to take jobs from here.”

Meanwhile, Boeing South Carolina Vice President Beverly Wyse said she expects employment to be stable for the next few years. “I don’t anticipate any layoffs,” she said.

Today, additional huge, white Boeing buildings are rising on the expanding site, which is surrounded by empty land that’s being steadily drained and reclaimed from swamps where the occasional alligator still shows up.

The young engineer, who spoke on condition of anonymity because Boeing doesn’t allow unsupervised interactions with the press, is glad he made his cross-country move.

In contrast to Boeing’s Seattle-area units, where he felt he bumped up against entrenched ways of doing things, he says the South Carolina site offers the can-do spirit and energy of a startup enterprise.

“The culture here is way more optimistic. It’s so young and new … I found it to be a breath of fresh air.”

It’s been a decade since two Boeing suppliers first set up their 787 fuselage plants in South Carolina, and seven years since Boeing took over their struggling operations and then made it the first East Coast site to assemble its jets.

Since 2009 when it placed the final assembly plant here, Boeing has invested more than $2 billion in its South Carolina facilities.

A huge new paint hangar is almost complete. A third autoclave, a large high-pressure oven used to bake 787 rear fuselages, will be ready this summer.

By decade’s end, employment here is likely to grow some more. Three years ago, in return for a state incentive package of $120 million, Boeing committed to creating 2,000 additional jobs in South Carolina through 2021.

Since inking that incentive deal, it’s added some 1,200 jobs, with total employment now at more than 7,500.

In the first expansion of Boeing South Carolina’s activities to other jets beyond the 787, engineers here designed the inlet of the engine pod, or nacelle, for the 737 MAX.

That complex part is now being manufactured here and shipped to Renton. Meanwhile, the South Carolina propulsion engineers are moving on to design the 777X nacelle.

Michaels identified the Southeastern U.S., including South Carolina, as “the new hot spot in the world.”

Lip skins and floor grids: A cluster of suppliers sprouts in South Carolina

He believes placing a 787 final-assembly line there was a watershed move that will drive future expansion — “a magnet to draw in other investments” — as suppliers such as GKN build major facilities to service the Boeing plant.

Though Boeing South Carolina is one-tenth the size of the company’s units in the Puget Sound region, Wyse — who came here a year ago after running the highly successful 737 assembly plant in Renton — sees great promise in her new baby.

“If the site continues to be competitive and performing strongly, I think it will be a good alternative for future (airplane) programs,” Wyse said.

Boeing will soon ramp up production of the two existing 787 models here. And this fall it will begin assembling the largest Dreamliner, the 787-10, built exclusively in South Carolina.

The building where the aft fuselage of every 787 is fabricated was nearly doubled to 840,000 square feet just over a year ago. Inside, five large automated fiber-placement machines wind carbon-fiber tape onto giant molds to create the composite fuselage structures.

Getting ready to build the 787-10 this year, Boeing has already wound as a test piece a rear fuselage section for that jet, which is 8 feet longer than the corresponding section on the 787-9.

Preparing to build more fuselages, and build them faster, Boeing is deploying sophisticated new automation equipment. And just as in the Puget Sound region, its most cutting-edge gear is supplied by engineering firm Electroimpact of Mukilteo.

I sensed the writing on the wall in Seattle.” - Boeing engineer who moved to South Carolina

On a newly installed Electroimpact machine dubbed the “Quadbot,” four robots dance across the rearmost fuselage section, avoiding crashing into each other as they drill holes and insert bolts that fasten the structural frames.

“It does a lot more work in a lot less time,” said Mike Bunker, who runs the aft fuselage facility.

Further along in the process, where the two big sections of the rear fuselage are joined, Boeing is introducing Electroimpact “flextrack” machines, which are mounted on rails to sweep around the circumference of the join, drilling and fastening as they go.

Two years ago a huge backlog of unfinished work had built up at the fuselage factory. Now, say workers here and in Everett, South Carolina is delivering relatively complete fuselage sections to the final-assembly lines on each coast.

Roughly a third of the engineers came to South Carolina either straight out of college or from some non-aerospace job, said Keith Young, director of composites technology.

An additional 40 of them moved from the Puget Sound area, where this work was formerly located.

Inside the BR&T building, two 787 rear fuselage sections that were produced as test pieces are now used as platforms to develop another robot, an “Innerbot.”

This is essentially a mate for the Quadbot, which moves only on the outside of the fuselage.

As the Quadbot drills holes and inserts fasteners — 2,800 of them per aft fuselage section — a mechanic inside the section must put a collar on each fastener and tighten it. Boeing’s engineering team here has built the Innerbot to take over that role.

The movements of the paired robots are synced precisely, so that when the Quadbot inserts each fastener, the Innerbot is right there with the collar.

Operating within the confined space of the fuselage section, the Innerbot is small and agile. Sensors on the robot feel the resistance as it tightens a fastener collar. If its arm comes into contact with a human or other obstruction, it detects that force and stops.

And it can see. Two cameras produce a 3-D image the robot uses to position the collar precisely over the fastener. Boeing engineers write the recognition software that makes this possible.

Young said the Innerbot could be deployed in production as early as 2017.

Myriad other research projects are in progress elsewhere in the building.

In a “clean room” devoted to technology for composite fabrication, engineers were working with Electroimpact robots that lay down composite tape to make stiffening rods called stringers long enough for the 787-10.

In another lab, two young engineers — 22- and 26-year-olds fresh out of Columbia and Iowa State — were testing a robotic system for sanding composite skins before painting. Almost ready to deploy, their system is set to begin operator training any day.

A clear signal that Boeing is expanding its ambition in South Carolina is the propulsion work on the 737 MAX and 777X jets.

During a recent visit a team of 20 mechanics was assembling the front part of the nacelle that surrounds the engines of the new Renton-built 737 MAX.

On the current 737 model this work is done by the Good­rich unit of United Technologies. For the new MAX model, Boeing has taken it in-house to South Carolina.

The complex part the mechanics were assembling from intricately wrought composite, titanium and aluminum components — the inlet of the nacelle — was designed by South Carolina engineers in offices overlooking the manufacturing floor of the 225,000-square-foot building.

They also designed the fan cowl of the MAX nacelle (which, perhaps surprisingly, is built in Spain by a unit of Boeing’s archrival Airbus).

The mechanics took up less than a quarter of the building as they hand-built the initial parts. On the rest of the floor, preparatory installation work was well advanced for robots that will automate much of the assembly process as MAX production steeply increases.

The culture here is way more optimistic.” - Boeing engineer who moved from Puget Sound to S.C.

With the MAX work complete, those same engineers are now designing the inlet, fan cowl and thrust reverser on the nacelle of the forthcoming 777X.

The company has also established a large IT engineering support center, doing work moved from the Puget Sound region.

And Boeing has bought enough empty land around its site — growing from 302 acres in 2013 to 884 acres today — to double the size of its current facility if needed.

So what does Boeing have in mind for the future of South Carolina?

The Seattle Times obtained a 2013 internal presentation, restricted to employees “with a need to know,” that lays out the strategic plan.

Beyond 2020, the presentation includes a map of the site showing large buildings for “subassembly / assembly” that don’t yet exist and were described as “potential future growth.”

Two goals are listed: Sustaining 787 production is one. The other is “New Airplane Programs.”

Boeing spokesman Doug Alder said the additional land the company has purchased around its main site “is available to protect for potential future growth as needed,” although “we don’t have any plans for that property” at this time.

The young engineer who moved here from Everett said his managers constantly emphasize that “nothing is guaranteed” and that North Charleston must compete against other Boeing locations for future work.

“We need to prove we’re capable and can do it within cost,” he said. But that directive applies equally to Boeing’s Puget Sound region units.

“There’ll be no more placing work somewhere because we’ve always placed it there,” said the engineer. “They are strong on internal competition between sites.”