Nine months after the Federal Aviation Administration (FAA) grounded the 737 MAX, Boeing finally pulled the plug on the jet’s production Monday. The company announced it’s temporarily halting the assembly lines in Renton from January, with no specified timeline for a restart.

However, in a welcome surprise for the 12,000-strong Renton workforce, Boeing said there will be no layoffs.

“During this time, it is our plan that affected employees will continue 737-related work, or be temporarily assigned to other teams in Puget Sound,” Boeing said in a statement.

Boeing has faced an unprecedented crisis, with more than 700 MAX aircraft grounded worldwide, including nearly 400 built since the grounding. Many have been in storage so long they’ll need extensive maintenance before they fly. The production stoppage will stop the parked fleet from growing to unmanageable proportions, while retaining the workforce will allow a smoother restart of the assembly lines when that time comes.

Boeing’s announcement left many details unanswered, in particular the scale of the financial hit to Boeing and the impact on suppliers. For employees, the news of a shutdown was worrying, yet came with the relief that their jobs would continue.

As workers left the factory Monday afternoon, many were reading about the Boeing statement on their phones.

“That’s good news,” said one worker as he crossed Logan Avenue in front of the soon-to-be-idled plant. “I didn’t want to be laid off.”

Earlier in the day, many workers had been speculating and hoping that Boeing wouldn’t idle the plant, wary that the disruption could not only hurt their paychecks but would bring huge costs to restart production once the MAX is recertified to carry passengers.

“I just can’t imagine them shutting this place down,” said one longtime worker. “I mean, all the vendors? It would be a mess.”

Others said they’d been expecting the news for some time. “The delay in recertification is on everybody’s mind,” said one longtime employee.

“I’m really surprised they kept it going this long,” said another. “But I’m disappointed. Really disappointed in leadership. I’ve got no respect for them anymore.”

The company said that during the slowdown in production since April, when Boeing cut its output from 52 jets per month to 42, it’s been able to fix issues with the production system and allow suppliers that were lagging to catch up, and it intends to have some employees working on efforts to sustain those gains. 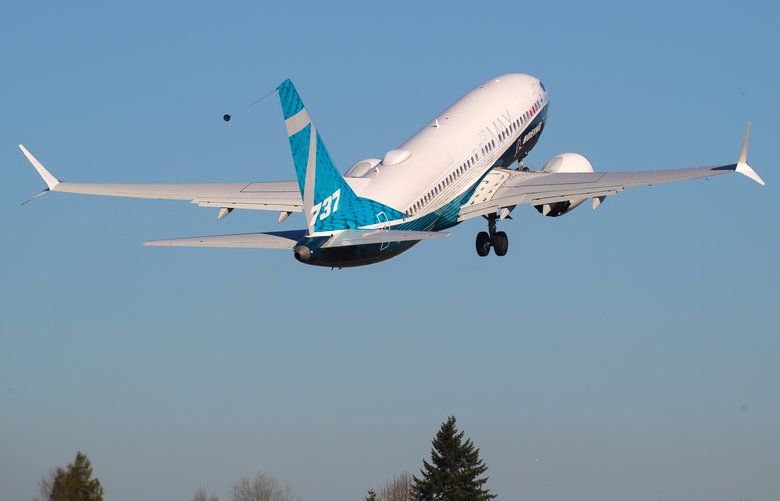 A Boeing insider briefed on the decision described the Renton factory’s manufacturing operation as a “crown jewel” management must protect.

“You try to keep the team together as best you can,” he said. “They all still have jobs.

“I think it’s the right thing to do,” he added. “We care about our workforce.”

The insider said Boeing didn’t announce any timeline for the production stoppage because it has no control over the jet’s return to service. “The FAA has a lot more control than we do,” he said.  “When it’s time to get back, we will.”

Though Boeing had been hoping for approval to fly the MAX again by year end, last week FAA Administrator Steve Dickson pushed that expectation into next year and told Boeing CEO Dennis Muilenburg to back away from public statements suggesting otherwise.

Officials privately identified mid-February as the new target for FAA clearance. Assuming no further slips in the schedule, that still extends the MAX’s grounding to almost a year. The MAX was grounded worldwide on March 13 following two fatal crashes in just over four months killed 346 people.

Boeing’s statement said the decision to stop production “is driven by a number of factors, including the extension of certification into 2020, the uncertainty about the timing and conditions of return to service and global training approvals, and the importance of ensuring that we can prioritize the delivery of stored aircraft.”

In a message that went out Monday afternoon to Renton employees, the new head of Boeing Commercial Airplanes, Stan Deal,  told employees he’d keep them updated and that “over the next few weeks, we will continue to assess the appropriate duration of the production suspension.”

During the shutdown, he added, Boeing will “work with our suppliers to ensure plans are in place to resume production and eventual rate increases, and prepare to restart deliveries once the grounding is lifted.”

Deal said the halt to production, finalized Monday at a meeting of the company’s board in Chicago, was “a decision not taken lightly.”

How long is the shutdown?

Among the workers leaving the factory after  work Monday, one longtime employee said that while there’s “some sense of relief” about the job reassurance, “I advise people to read the statement.”

“There are no plans to lay off anybody ‘at this time’ just means they could change their minds and that there could be layoffs at a later date,” he said.

Rep. Rick Larsen, (D-Everett), who chairs the House Aviation subcommittee that is investigating the MAX crashes, responded to Boeing’s announcement with a statement calling the shutdown “a body blow to its workers and the region’s economy.”

He’s concerned about the uncertainty over when production will resume, as well as the impact on Boeing suppliers in the region who produce parts for the 737 and the Renton businesses that depend on providing goods and services to the Boeing workforce.

“The only saving grace is the Boeing leadership has promised not to lay off any workers,” he added. He promised to ensure Renton employees have access to support services “in the event of a prolonged shutdown.”

Larsen said that for the long-term good of Boeing and the MAX, “the FAA should continue to emphasize that safety is the guiding principle for any return to service decision.”

Members of the Machinists union in Renton are relieved they will remain eligible for a $5,000 lump sum early in the new year. Part of the contract signed in 2014, in which the union gave up its pension plan in return for Boeing putting the 777X in Everett, is that all Machinists on the payroll on Jan. 3 will get the payout.

However, the financial implications of the production stoppage for the company are unclear.

Because Boeing’s ongoing costs during the shutdown period will be spread over many fewer aircraft than previously projected, the company will have to factor the extra cost per airplane into its accounting, in addition to likely write-offs to cover compensation to suppliers and airlines for the extension of the grounding.

Through October, Boeing had already projected $2.7 billion in extra costs due to the previous 20% production cut, in addition to a $5.6 billion write-off to cover compensation to suppliers and customers.

Boeing said it won’t provide information on the financial consequences of the production suspension until it releases its fourth-quarter earnings results in late January.

For the 737’s global supply chain — which includes engine parts from the U.S and France, fuselages from Wichita, Kansas, and tail rudders from China—the stoppage in Renton is potentially very disruptive. But Boeing gave no information about how that will be handled.

Some major suppliers have contracts that require Boeing to continue to take delivery of their parts, and to pay for them. Others may have to suspend their own production.

After Boeing’s announcement, GE, which makes the MAX’s new LEAP engines, would say only that it’s working with Boeing and suppliers to mitigate the impact.

Rob Spingarn, an aerospace analyst with Credit Suisse, wrote in a note to clients Monday that “without more detail on the duration of the suspension and the supplier terms, it is difficult to gauge the economic impact of this decision to Boeing and its suppliers.”

He added that it’s also “unclear how much cash this decision will actually save, given the unclear treatment of the supply chain as well as the fact that Boeing is undertaking no actions to produce labor cost savings.”

Leading aerospace industry analyst Richard Aboulafia of the Teal Group pointed Monday to the sustained dip in air-traffic growth this year as another factor that may have influenced the temporary halt to 737 production.

After a decade of booming aviation growth, peaking at 7.6% in 2017 and 6.5% in 2018, this year traffic growth has slowed dramatically and the International Air Transport Association (IATA) now forecasts just 4.2% growth this year.

If this trend continues, perhaps matched by low oil prices, that would produce “a seriously painful bust cycle” for aircraft manufacturers in 2021 as airlines defer orders and stick with older, less fuel-efficient planes, Aboulafia believes.

Cutting back on the number of jets built makes sense to avoid a larger glut of grounded MAXs coming back into the market, Aboulafia wrote. That could create “a capacity avalanche exactly when airlines really didn’t want it,” he said.

Anticipating Boeing’s 737 shutdown announcement and the potential financial hit to come, the market slammed the jetmaker’s share price Monday even as the Dow reached a record high. The stock fell nearly $15, or 4.29% for the day, closing at $327.

In an effort to reassure investors, Boeing announced after the market closed that in March it will pay a substantial $2.055 per-share dividend to its stockholders.

This surprised many analysts, who’d thought Boeing might preserve cash and waive the dividend this quarter. Nevertheless, the stock price continued to fall in after-hours trading.

“They had to do something. I think the FAA is doing the right thing, making sure it’s safe,” the worker said.

“Straight up, they screwed this up,” he added. “But we’re going to get it right.”