Recently named Boeing Chairman David Calhoun will take over as CEO, bringing an immediate shift in tone that many observers welcomed. Others questioned whether his background in private equity and GE’s finance-driven management is really the change Boeing needs.

Muilenburg’s position, under pressure since March, became untenable this month following a breakdown of relations with the Federal Aviation Administration (FAA) and the growing anger of Boeing’s suppliers and airline customers over the collapse of its optimistic forecast that the MAX could be cleared to fly this year. 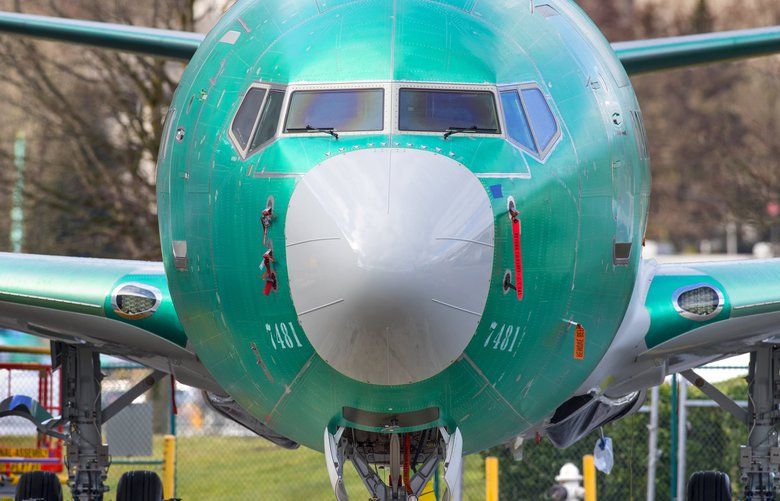 When the board, including Muilenburg, met a week ago and decided to shut down the Renton assembly lines in January, there was no discussion of firing the CEO.

However, in the days that followed there was an intense negative reaction to that development. Chief executives of airlines and major suppliers called Chicago to express their dissatisfaction that the long-promised return to service had suddenly shifted to a production halt.

Days later, United Airlines pushed the MAX out of its flight schedule until June and Spirit AeroSystems in Wichita, Kansas, halted production of MAX fuselages.

It became clear that relationships with Boeing’s partners and customers “had gotten to a point where they were difficult to repair,” said a person familiar with the developments.

On Friday, Boeing’s new Starliner capsule went off course on a planned trip to the International Space Station. In a year when very little went right for Boeing, that may have been another tipping point for the board. “That was a national embarrassment,” said a senior Boeing executive.

At 5 p.m. Eastern time on Sunday night, the independent board members held another meeting via teleconference and decided Muilenburg, 55, had to go.

Calhoun and board member Larry Kellner, the former CEO of Continental Airlines, then made a short call to the CEO to break the news to him.

Rep. Peter DeFazio, D-Oregon, who led the grilling of Muilenburg at a public hearing of the U.S. House Committee on Transportation and Infrastructure in October, said in a statement Monday that “Dennis Muilenburg’s ouster was long overdue.”

“Under his watch, a long-admired company made a number of devastating decisions that suggest profit took priority over safety,” DeFazio said. “I hope the decision to remove Muilenburg means that Boeing is also ready to mark a new chapter in its commitment to safety and accountability.”

Calhoun, 62, who joined the company’s board of directors in 2009 and replaced Muilenburg as chairman in October, will take over as president and CEO starting Jan. 13.

The company didn’t mince words in explaining the change, declaring in its statement that the board “decided that a change in leadership was necessary to restore confidence … as it works to repair relationships with regulators, customers, and all other stakeholders.”

Kellner, who joined the Boeing board in 2011 just as the MAX was launched, will take over from Calhoun as chairman.

Calhoun’s appointment was welcomed by some in the industry who were looking for a more confident extrovert to communicate better than Muilenburg did and to restore confidence in Boeing, not only with airline leaders and major suppliers but also with the public.

However, others questioned whether Calhoun’s private equity background and his long tenure on the Boeing board will equip him to restore the company’s standing.

A former Boeing senior leader, who asked for anonymity to speak freely, admitted doubts about whether Calhoun is the one to revive the company’s historic culture of engineering prowess that’s been eclipsed for years by a focus on financial performance.

“If it’s just more cost cutting, that’s not what we need,” he said. “We have to restore the culture of engineering excellence that has served us so well for over a century.”

In an interview, Richard Aboulafia, vice president of analysis at aviation consulting firm Teal Group, offered similar concern that Calhoun may have “the wrong skill-set to change Boeing.”

“He’s been on Boeing’s board for 10 years, coming from the private equity industry and from GE in the Jack Welch era,” Aboulafia said. “This is the kind of résumé that Boeing has not been lacking and it’s not as if he’s bringing a fresh perspective.”

He said Boeing needs a leader now with not only a firm grip of the jetliner market but also with “a strong understanding and appreciation for engineering.”

“That’s what’s been lacking at Boeing, and that’s what this company really needs,” he said.

Aboulafia acknowledged, however, that Calhoun is certainly “going to have a better presence out there than Dennis Muilenburg.”

“He’s going to reassure people — everyone from employees to the public to Congress,” he said. “If he follows it up with an effort to make things more transparent, then that will be very welcome.”

Rob Stallard, a financial analyst with Vertical Research Partners, wrote in a note to investors Monday that, given Calhoun’s age, “he is likely to have a relatively short tour of duty at Boeing, with his priorities being getting the 737 MAX back into service without further aggravation, and starting the process of finding a new CEO and senior management team that can potentially get Boeing back on track.”

Since March, Muilenburg had stumbled through the MAX crisis. Appearing tone deaf, he pointed fingers at the Lion Air and Ethiopian Airlines pilots at the helm of the crashed flights and initially refused to admit there was any flaw in Boeing’s design of the MAX’s new MCAS flight-control system.

In his refusal to accept blame, every statement seemingly filtered through Boeing’s legal team, he generated intense public hostility.

And Muilenburg’s repeated projections that a return to the skies was always just a month or two away seemed aimed at investors to buoy the stock price rather than conveying reality.

This month, the rosy predictions finally vanished when FAA clearance for the MAX slid out into next year.

In a signal that Calhoun means to change the tone right away, on Monday morning he called government officials, members of Congress, major airline CEOs, supplier executives and investors “to pledge his partnership and open lines of communication,” Boeing said.

An official with a major U.S. airline, who asked not to be identified, said industry leaders already know Calhoun well and have an easy personal relationship with him, unlike with Muilenburg.

“Muilenburg wasn’t the sociable person who’d go out for a drink with the airline CEO,” the official said. “He had an introverted engineering mindset.”

In contrast, Calhoun is confident and outgoing.

In early November, after he replaced Muilenburg as board chairman, he gave an energetic interview on CNBC, admitting errors and laying out how the MAX will be fixed and how Boeing plans to overhaul its entire safety system.

The airline official welcomed the immediate change in leadership style that Calhoun conveyed in the Monday phone call.

“When the fix to the MAX is in place, Boeing has to rebrand itself  as a company, with airlines and also with the traveling public,” he said. “Calhoun will be much more aggressive in leaning forward to communicate with the public.”

The airline official foresees much more open communication from Boeing going forward. “Lawyers shouldn’t be telling the CEO what to do, and the company cannot just hide and issue a ‘no comment,'” he said.

Boeing also announced Monday it’s bringing in from outside a new leader of its communications team.

Boeing’s statement Monday promised the new leadership will deliver “renewed commitment to full transparency, including effective and proactive communication with the FAA, other global regulators and its customers.”

Muilenburg’s handling of the MAX crisis came under fire from all sides, although the board voiced support for him as recently as October, when Calhoun replaced him as chairman.

In mid-November, after Boeing issued a Veterans Day declaration that it expected to deliver some MAXs by year-end, FAA administrator Steve Dickson was clearly annoyed and sent Boeing an unmistakable warning.

In  a video message, he instructed FAA technical employees assessing the MAX’s revised flight-control software to take all the time required to ensure complete safety.

But Boeing didn’t absorb his message. FAA technical staff in Seattle continued to be pressed by their Boeing counterparts to move fast so that clearance could come by year end.

Two weeks ago, Dickson delivered an unusually blunt dressing-down to Muilenburg in person. In a Washington, D.C., meeting, he told the Boeing boss to stop predicting when the MAX would fly again.

In an extraordinary rebuke, Dickson then made the warning public by explaining in a note to Congress that “Boeing continues to pursue a return-to-service schedule that is not realistic due to delays that have accumulated for a variety of reasons.”

He added: “More concerning, the Administrator wants to directly address the perception that some of Boeing’s public statements have been designed to force FAA into taking quicker action.”

The 737 MAX was grounded worldwide in March after the second of two crashes that together killed 346 people.

Michael Stumo, the father of MAX crash victim Samya Rose Stumo, welcomed the news of Muilenburg’s ouster, calling it “a good first step toward restoring Boeing to a company that focuses on safety and innovation.” In a statement distributed by an attorney for crash victims, Stumo also said “several Board members who are underperforming or underqualified” should also resign.

Boeing has faced an unprecedented crisis, with more than 700 MAX aircraft grounded worldwide, including nearly 400 built since the grounding. Many have been in storage so long they’ll need extensive maintenance before they fly. 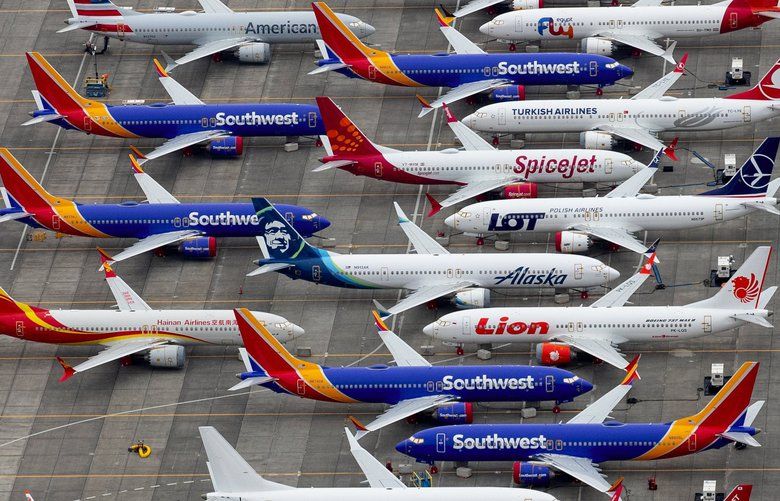 The audit of the updated MCAS software still has to be completed, including analysis of the built-in redundancies and various failure paths, according to a person familiar with the details.

That will be followed by MAX certification flights, Boeing’s submission of the final software and then FAA analysis of all the data. In addition, international regulators must still decide exactly what pilot training will be required before the MAX can be cleared to fly.

Privately, officials now anticipate Boeing could be through all that, and the MAX cleared to fly, in “late February or early March.”

According to Boeing’s proxy filing in April, Muilenburg has accrued pension benefits worth just over $12 million per year.

In addition, he’s entitled to walk away with $6.6 million in severance pay and another $32 million from various performance awards.