In the latest of a string of quality control issues, Boeing discovered debris that mechanics left inside the wing fuel tanks of several undelivered 737 MAXs during the aircraft assembly process.

Boeing has ordered inspections of all the undelivered MAXs, about 400 of which are stored at various locations.

Regarding the additional 385 MAXs that were delivered to customers but have been grounded for almost a year and are parked at airfields around the world, company spokesman Bernard Choi said Boeing is recommending inspections for those airplanes that have been in storage for more than a year. “It’s still undecided if we will inspect the rest” of the delivered MAX fleet, he added. “Obviously, we’ll do what’s right for safety.”

Mark Jenks, vice president and general manager of the 737 program and its Renton assembly site, sent all 737 employees a message Tuesday outlining a series of actions to deal with the problem of what’s referred to in the aviation industry as “Foreign Object Debris,” or FOD.

“FOD is absolutely unacceptable,” his message said. “We need our entire team to make this a priority.”

Boeing spokesman Chaz Bickers said that although Boeing must now inspect all the stored MAXs for similar debris, “we don’t think this changes our timeline for the MAX return to service” by mid-summer.

In a statement, the Federal Aviation Adminstration (FAA) said the agency increased its surveillance based on initial inspection reports and “will take further action based on the findings.”

Boeing’s message to employees did not specify exactly what debris had been found inside the wings, saying only that “a range of Foreign Object Debris (FOD) was recently found in the fuel tanks of several 737 MAX airplanes in storage.”

The FOD problem on the MAX was first reported Tuesday on Scott Hamilton’s Leeham.net aviation site, which said the objects found included left-behind tools and rags. Either would be cause for serious concern. Tools banging around inside a fuel tank could damage sensors or wiring. A rag could block a fuel line.

Boeing has had constant trouble with FOD discoveries in the past couple of years, previously on the 767-based KC-46 military tanker built in Everett and on the 787 Dreamliners built in North Charleston, S.C.

“There’s a systemic issue with Boeing’s quality control that hasn’t been corralled yet,” said Hamilton in an interview. “This is not related to the MAX crashes or exclusively a MAX issue. Boeing has these FOD issues on other airplane programs.”

A year ago, Boeing was forced to ground its KC-46 tankers after the Air Force expressed concern about loose tools and bits of debris found in various locations inside the completed airplanes.

Management in Everett declared a level 3 state of alert on the assembly line over the KC-46 FOD issue, which is a defense contract term just one step away from a complete shutdown of the assembly line. A memo sent to employees at that time urged them to win back the confidence of the Air Force “and show them that we are the number one aircraft builder.” 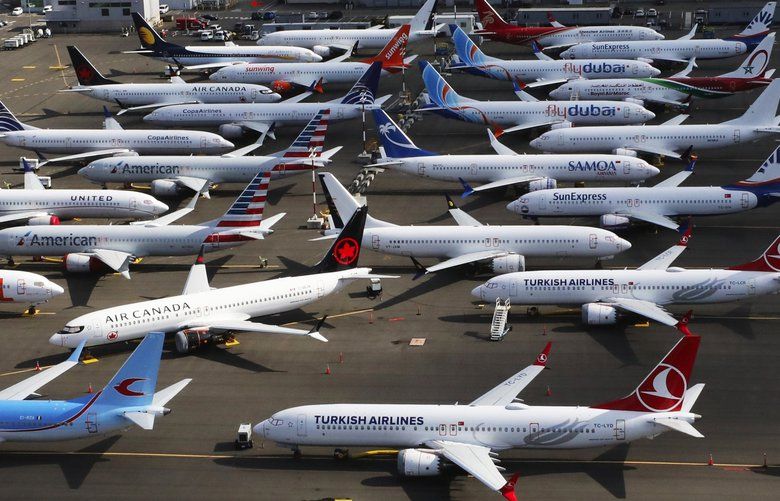 Then last spring, the New York Times published details of shoddy quality control on the 787 assembly lines in South Carolina dating back to 2016.

Debris was routinely found dangerously close to wiring beneath cockpits at the assembly plant. Piles of titanium shavings— produced when fasteners were fitted into nuts — accumulated close to electrical equipment underneath the passenger floor. Employees found tubes of sealant and metal nuts inside finished jets. In one instance, a ladder and a string of lights were left inside the tail of a plane.

Less than a month after the crash of the second 737 MAX jet, Boeing called North Charleston employees to an urgent meeting about airlines finding random objects in their new airplanes.

Yet the issue of FOD keeps reappearing.

Last year’s lapses in FOD control came as Boeing announced a sweeping transformation of its manufacturing procedures that would result in it cutting almost 1,000 quality inspectors’ jobs over two years.

Quality inspectors concerned about that move noted that Boeing failed one element of a quality-control audit on the 747, 767 and 777 airplane programs in December 2018.

The new FOD discoveries on the MAX are just the latest setback for the airplane that has been grounded since last March following two fatal accidents.

The inspections will take two to three days per aircraft. Fuel must be drained from the wings before a mechanic can go in and do a thorough check.

Jenks’ message to employees states that management has already held a series of meetings in Renton on the factory floor “to share a new process for stopping FOD.”

That includes updated instructions and required checklists for employees working in the wing fuel areas; additional inspections, audits and checks when the wing tanks are closed and sealed; and new signs posted in the work areas to remind employees of the proper procedures.

On Tuesday, Boeing also announced that Mike Fleming, the vice president who was in charge of providing aftermarket services to airline customers, has been appointed vice president of 737 MAX Return to Service and Global Aviation Safety System, a new position.

His job will be to ensure all the MAXs are prepared to safely return to service and to provide support to airlines once they are back in the air. He’ll also lead Boeing’s efforts to engage with airlines, regulators and the industry to strengthen global aviation safety, the company said.