Boeing got an unexpected jolt in September when engineers in Everett put the new 777X airframe through an extreme test of its structural strength. Just as the test approached its target stress level, an explosive depressurization tore through the fuselage.

Boeing has kept the details secret, but photos obtained by the Seattle Times show that the extent of the damage was greater than previously disclosed and earlier reports were wrong about crucial details.

The test plane is a complete write-off, its fuselage skin ripped wide open just behind the wing. A passenger door that blew out and fell to the factory floor was a secondary impact of the initial rupture, which was located far below the door.

The relatively good news for Boeing is that because the test failed so explosively at just 1% shy of meeting federal requirements, it will almost certainly not have to do a retest. Regulators will likely allow it to prove by analysis that it’s enough to reinforce the fuselage in the localized area where it failed.

Asked for comment, Boeing said in a statement Tuesday that while it has not yet completed a detailed analysis of the incident, “what we’ve seen to date reinforces our prior assessment that this will not have a significant impact on the design or our preparations for first flight.”

Related More on the Boeing 777X 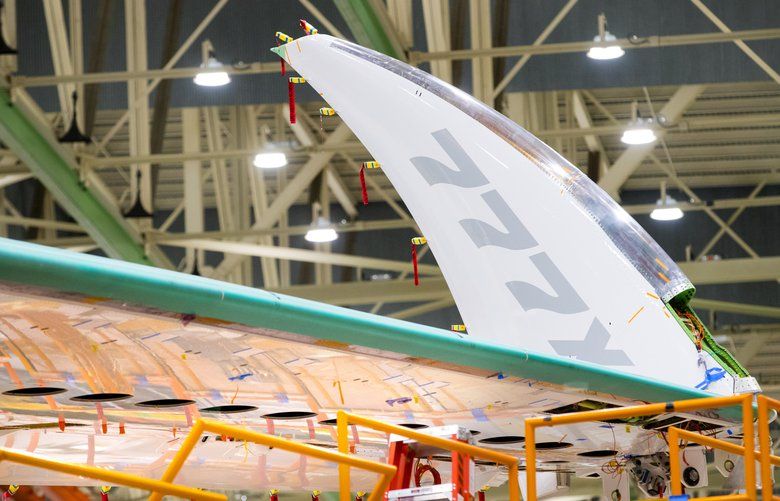 Boeing spokesman Paul Bergman said the test result won’t add to the program delays already caused by problems in development of the jet’s GE9X engine. He said the 777X should still fly for the first time in early 2020 and the first will be delivered to an airline in 2021.

Wings bent up, fuselage bent down

The test conducted that day was the final test of this airplane, which was fixed in a test rig inside the Everett factory specifically to be stressed close to destruction. The jet was surrounded by scaffolding and multiple orange weights hung from the airframe. Wires were hooked to instrumentation that studded the surface to measure every stress and deflection, the data monitored in real time by engineers sitting at control room computers.

As the test neared its climax, weighted pulleys had bent the jet’s giant carbon composite wings upward more than 28 feet from their resting position. That’s far beyond the expected maximum deflection in normal flight of about 9 feet, according to a person familiar with the details.

At the same time, the fuselage was bent downward at the extreme front and aft ends with millions of pounds of force. And the interior of the plane was pressurized beyond normal levels to about 10 pounds per square inch — not typically a requirement for this test, but something Boeing chose to do.

All this simulated the loads in a flight maneuver where a pilot would experience a force of 3.75 G, compared to the maximum of 1.3 G in normal flight.

The combination of the bending forces  on the wing and fuselage created a high compression load on the bottom centerline of the fuselage — the keel — according to the person, who asked for anonymity because the details are sensitive.

Federal certification regulations require engineers to ratchet up the forces until  they reach “ultimate load” — defined as 1.5 times the “limit load,” which is the maximum that would ever be experienced in normal flight — and hold it there for at least three seconds.

When Boeing tested the original 777 model in 1995, it kept going until the aluminum wings snapped at 1.54 times limit load. On the 787, it chose to stop at 1.5 and then ease the composite wings back down again. Breaking a pair of composite wings could result in release of unhealthy fibers in the air, so it’s likely that with the 777X also having composite wings, that was the plan again this time.

But as Boeing personnel along with six FAA observers watched from the windows of a control room, at 1.48 times limit load — 99% of ultimate load — the structure gave way. Under the center fuselage, just aft of the wing and the well where the landing gear wheels are stowed, the extreme compression load caused the plane’s aluminum skin to buckle and rupture, according to the person familiar with the details.

The resulting depressurization was explosive enough that workers in the next bay heard it clearly. One worker said he heard “a loud boom, and the ground shook.”

That then caused secondary damage: The photos show that the fuselage skin split part of the way up the side of the airplane, along with areas of bent and twisted structure that extended through the area around a passenger door.

A day after the incident, based on incomplete information, The Seattle Times and other media outlets incorrectly reported that a cargo door had blown out.

Unlike the plane’s cargo doors, which hinge outward, the passenger doors on airliners are plug-type doors that only open inward and are larger than the hole they close. But the structure around that passenger door just aft of the 777X wing was so damaged that the pressure blew the door out and it fell to the floor.

These secondary damage sites — the rip up the side of the fuselage, the door blown out — alarming as they might seem, are not a concern to air safety engineers. “The doors were not a precipitating factor,” said the person familiar with the details.

It’s the initiating failure, the weakness in that localized area of the keel, that Boeing must now fix.

Yet the fix is very unlikely to require a retest.

A safety engineer at the Federal Aviation Administration (FAA), speaking anonymously without permission from the agency, said that because the blowout happened so close to the target load, it barely counts as a failure.

Boeing will have so much data gathered on the way to the 99% stage that it can now compare with its computer models to analyze the failure precisely, the FAA engineer said. It can then reinforce the weak area, and prove by analysis that that’s sufficient to cover the extra 1%.

The engineer said it’s not that unusual to find a vulnerability when taking an airplane structure to the edge of destruction.

“The good news is they found it and can address it,” the FAA engineer said. “They found a problem they can fix. They can beef up the structure based on analysis.”

FAA spokesman Lynn Lunsford said the safety agency is continuing conversations with Boeing about how the 777X can meet requirements after the test failure.

“The FAA requires manufacturers to meet design and certification standards,” Lunsford said. “How they choose to do that is up to them.”