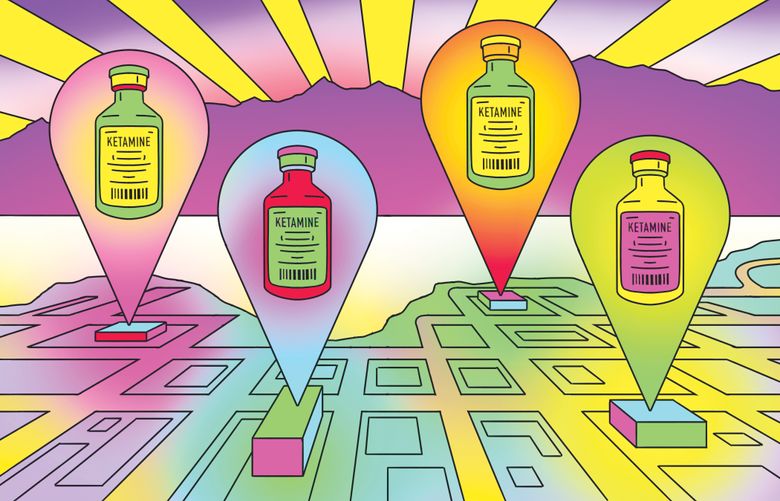 In the past three years, at least a dozen such facilities have popped up around the Puget Sound region.

“When we started seeing patients a little more than a year ago, I wasn’t sure what to expect in terms of volumes,” said Liana Ren, a nurse anesthetist who runs Lighthouse Infusions, a ketamine clinic in Kenmore. “The last couple of months … our schedule has been full.”

Ketamine, typically used as an anesthetic during medical procedures, is not approved by the Food and Drug Administration for treating mental illness. Frequent use can lead to addiction. Research suggests long-term side effects of repeated ketamine doses are uncertain.

But studies suggest that when administered correctly and under strict, medical supervision, the drug may help alleviate symptoms of severe depression, post-traumatic stress disorder (PTSD) and anxiety in some people.

“This offers great hope … but we can’t let our optimism and excitement about this get ahead of the data that we have on the safety and efficacy,” said Dr. Gerard Sanacora, co-director of the Yale New Haven Hospital Interventional Psychiatry Service.

Clinics are mostly run by advanced nurses, which has stirred debate. Nurse anesthetists work with ketamine regularly during medical procedures, and psychiatric nurse practitioners are licensed to administer the drug. However, some psychiatrists express concern that medical doctors are often not directly involved in treatment.

There are also medical and legal concerns around remote companies that don’t run clinics but rather mail patients ketamine lozenges and treat them over video chat. Asked about these remote treatments, Sanacora said, “there is zero high-quality data to show that that is safe or effective … period.”

Ketamine therapy is a starting point for companies looking to pioneer psychedelic medicine, which also see opportunity with other drugs such as MDMA and magic mushroom-like products. Field Trip has a market capitalization of about $250 million and aims to open 75 clinics globally by 2024. It has filed documents to conduct business in more than 30 states. It is also investing heavily into developing its own synthetic psychedelic molecules.

“I fundamentally believe that psychedelic-assisted therapy is going to displace most of psychiatry,” said Ronan Levy, co-founder of Field Trip, which is based in Toronto, Canada.

Sanacora prefers to be patient. “I just think we need to be cautious and responsible in how we develop these treatments.”

Ketamine changes mood and perception, and can sometimes cause hallucinations. It has psychoactive properties, though experts disagree on whether it is formally a psychedelic drug. Some report euphoria, disconnect from reality and floating sensations.

“People have described it as a spiritual experience,” Carnahan said. “There’s a sense of peace [and] acceptance.”

Because ketamine is FDA-approved for anesthesia, medical providers can administer it “off-label” if they deem it suitable for other purposes, like mental illness. One ketamine derivative called “esketamine” does have FDA approval when prescribed as a nasal spray with an oral antidepressant under medical supervision, to treat people with severe depression and suicidal thoughts. However, it isn’t used as widely in Seattle as ketamine itself.

Field Trip’s treatment involves a medical screening with Carnahan, then two separate sessions with a therapist to learn about the patient’s goals and prepare them for treatment. In a fourth session, patients are injected with ketamine, are given a blindfold and headphones, and the “psychedelic journey” ensues, lasting about two hours. In a fifth session, they reflect on the experience with a therapist.

This process, called “ketamine-assisted psychotherapy,” is roughly in line with how other such clinics operate. A different form of treatment called “ketamine infusions” involves limited verbal therapy because the drug dose is higher, which can “disrupt [a patient’s] linear thinking,” which makes talk therapy difficult, said Ren, of Lighthouse Infusions. Both types of treatments are offered in Seattle.

Each ketamine treatment at Field Trip costs $750, and each follow-up therapy session costs $250. But Carnahan said the company does not typically book individual treatments, instead selling packages of four or six sessions, costing $3,500 or $5,250, respectively.

Those prices are about in line with what other Seattle clinics charge. Ketamine infusions are cheaper, but total thousands of dollars as patients are recommended multiple sessions. According to providers, less than half is typically covered by insurance.

Not every ketamine treatment is positive. “For about half of our patients, it does not help,” said Dr. CristinaCusin, director of the Massachusetts General Hospital Ketamine Clinic and associate professor at Harvard Medical School. Her clinic treats nearly 30 patients per week with ketamine.

“You have to deal with patients who are already depressed and suicidal before the treatment, and they become much worse afterward because they feel like a failure.”

There’s enough physical and medical risk during treatments that physicians should be directly involved in treatment, said Dr. Joshua Bess, a Seattle psychiatrist and former president of the Washington State Psychiatric Association.

Most clinicians, irrespective of their degree, monitor vital signs and have specific training to work with ketamine. Still, Bess said, if a patient starts exhibiting something during treatment that’s “different or strange” and hasn’t been seen before by a clinician, “that’s where I get worried.”

Some patients, though, “don’t want a psychiatrist in their treatment,” said Allyn Wilcock, a nurse anesthetist who runs Northwest Ketamine Clinics, with three sites around Seattle. “They feel like they’ve had all the medications and it hasn’t worked for them.”

Providers will sometimes try to coordinate care with therapists. “I’m not an island unto myself,” said Ren. “I strongly recommend all of my patients that come to me maintain a close relationship with a mental health care provider.”

Bess said one reason more ketamine clinics may be run by nurses is because of the low supply of psychiatrists. In the United States, approximately 1,900 new physicians specialized in psychiatry in 2019. In contrast, about 4,100 nurses who either specialize in mental health care or anesthesia graduate per year.

From a legal perspective, Washington dictates that advanced nurses can “assume primary responsibility and accountability for the care of patients,” as long as they seek instruction before “implementing new or unfamiliar techniques.” This law applies to any clinic, not just ketamine ones.

However, health care companies must follow strict rules under Washington’s Corporate Practice of Medicine doctrine. It specifies that clinics must be owned by physicians, or in some cases, nurses, but cannot be owned by corporations.

Some companies can be rash. Hilary Bricken, a California attorney who has counseled other ketamine clinics, said she has been approached by clients who are “desperate to get around those laws,” especially when it gets complicated administering remote ketamine treatments.

“We’ve told these people, ‘You have huge problems when it comes to the applicable standard of care,’ ” said Bricken. “Most of them don’t care, and they don’t come back to us for any advice or guidance.”

Not a ‘consumer packaged good’

National data about ketamine clinics is scarce, but there are estimates of “many hundreds” around America.

With so many independent players, the fragmented market may prompt acquisitions, said Sa’ad Shah, who invests in psychedelic companies with Toronto-based Noetic Fund. He added private equity firms may consolidate clinics under one umbrella, like they have with dental clinics.

That consolidation could vary the quality of care if procedures aren’t standardized, said Dustin Robinson, founder of Florida-based, psychedelics-focused Iter Investments. Speaking broadly, he expressed concern around corporations trying to “capitalize on the huge valuations that these ketamine clinics are getting.”

“The public perception of this seems to be more like a consumer packaged goods type of product” instead of a medicine, said Shah. “That’s where it gets a little messy … bad actors can ruin it.”

Field Trip has a centralized team that designs clinics and trains therapists. Wilcock, of Northwest Ketamine, said he is “choosy” with who he hires, asking each person to complete a personality test before applying.

“It’s not as easy as … hooking them up to IV infusion,” he said. “Even a touch of an arm during the infusion might be really traumatic to someone who’s gone through some type of PTSD.”

Field Trip’s sights are set beyond ketamine. The company wants to use its clinics for other psychedelic drugs it hopes will get FDA approval in the coming decade. Levy estimates these drugs could replace a “big chunk” of the current $238 billion annual spending on mental illness.

At present, other companies are leading clinical trials with MDMA and psilocybin (the active ingredient in magic mushrooms). Field Trip is also developing its own drug, a synthetic, psilocybinlike compound that is shorter-acting, with Phase 1 clinical trials likely starting next year.

Noetic prefers to invest in companies researching and testing additional psychedelics, Shah said. The goal is for patients to walk into a “brain gym,” where mental health can either be treated for illness or improved for general well-being with a variety of psychedelics.

Cost is not the only issue that may hinder access to psychedelic drugs if approved. Many psychedelic drugs are Schedule 1 substances (like cannabis, for example), meaning they have “no currently accepted medical use,” according to the U.S. Drug Enforcement Agency.

Even if these drugs are approved, long-lasting fears around the consequences of drug use may dissuade Black communities and people of color, said NiCole Buchanan, a psychologist and professor at Michigan State University. Buchanan researches the role of race in psychedelic therapies.

There are already disparities in psychedelic research. More than 80% of participants in studies with psychedelics were white, and less than 3% were African American, according to a review of 18 separate studies.

“When I bring [psychedelics] up with clients of color, almost uniformly, they are stunned,” she said. “People have a lot of questions … How can this be tested? How long will it stay in my system? … Will their eyes be bloodshot?”

Buchanan is not directly involved in any of her patients’ treatments with ketamine. But as with many therapists, she counsels them in separate sessions before and after their experience. She does so from her office in Michigan, a state in the middle of its own ketamine clinic boom, and one where Field Trip, too, filed paperwork to conduct business earlier this year.

If you or someone you know needs support for mental health, here’s where to find help.

Mental Health America: Nonprofit dedicated to addressing the needs of those living with mental illness and to promoting the overall mental health of all Americans.

Here’s where to find diverse mental health resources in Seattle.