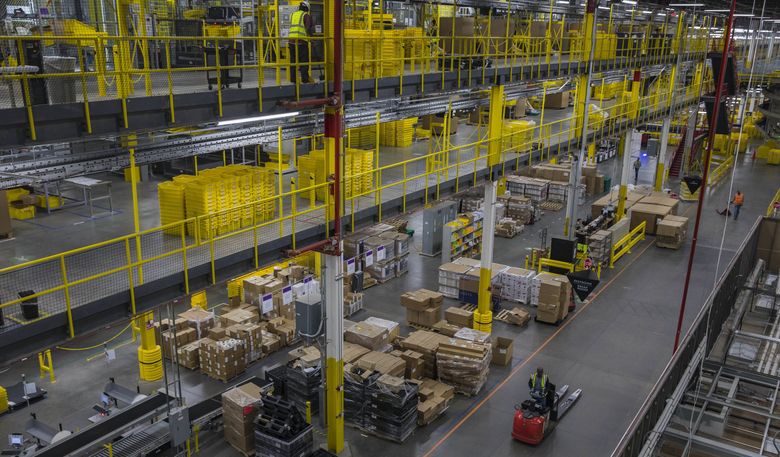 A view from inside an Amazon facility on Staten Island in New York in May 2019. (Hiroko Masuike / The New York Times)
By
Will Evans
Reveal from The Center for Investigative Reporting

On Cyber Monday 2014, Amazon operations chief Dave Clark proudly unveiled the company’s new warehouse of the future in Tracy, California. Behind him, racks packed with vitamins, toy rockets and paintball gear zipped across the floor, lugged by the orange robots that would help catapult the company toward world domination.

Of Amazon’s transformation, he said, “It’s better for everybody.”

Workers no longer would have to walk massive warehouse floors to find the right power drill — instead, robots would bring the drill directly to them. The hour or more it took to process a package had been pared down to as little as 15 minutes. More Amazon customers now could get products delivered to their door the same day they clicked “Buy.”

The following July, Amazon rolled out another innovation: Prime Day. The holiday shopping season was already a pressure cooker of warehouse activity known as “peak” inside Amazon. Now, the company had just manufactured a second peak in the middle of the year, a brand-new holiday that would become pivotal to the company’s growth.

In the six years since Clark stood in that cavernous warehouse and saw the future, the company’s value has leaped from less than $150 billion to more than $1 trillion, and CEO Jeff Bezos has become the richest person in the world.

The company’s top leaders have fashioned a mythology around its growth, casting Amazon as a force for good. Its obsession with delighting customers fuels a “virtuous cycle,” they say, that ends up benefiting everyone — even Amazon’s more than 250,000 warehouse workers.

In fact, as senators have fired off letters to the company and workers have led walkouts over health and safety, Amazon has engaged in an unapologetic public relations campaign.

But a new cache of company records obtained by Reveal from The Center for Investigative Reporting — including internal safety reports and weekly injury numbers from its nationwide network of fulfillment centers — shows that company officials have profoundly misled the public and lawmakers about its record on worker safety. They reveal a mounting injury crisis at Amazon warehouses, one that is especially acute at robotic facilities and during Prime week and holiday peak — one that Amazon has gone to great lengths to conceal. With weekly data from 2016 through 2019 from more than 150 Amazon warehouses, the records expose definitively the cost to workers of Amazon’s vast shipping empire — and the bald misrepresentations the company has deployed to hide its growing safety crisis.

The internal reports cheer incremental progress in a specific month or region; call out problem warehouses with the worst injury numbers; and detail safety initiatives, action items and pilot projects. While the reports show a committed drive to improve processes with technology or design changes, they don’t propose reducing the intense workload for Amazon’s warehouse employees, which is what helps drive Amazon’s speed.

Amazon often points to the tens of millions of dollars it has invested to enhance safety practices. Yet Amazon’s injury rates have gone up each of the past four years, the internal data shows. In 2019, Amazon fulfillment centers recorded 14,000 serious injuries — those requiring days off or job restrictions. The overall rate of 7.7 serious injuries per 100 employees was 33% higher than in 2016 and nearly double the most recent industry standard.

The data backs up the accounts of Amazon warehouse workers and former safety professionals who say the company has used the robots to ratchet up production quotas to the point that humans can’t keep up without hurting themselves. For each of the past four years, injury rates have been significantly higher at Amazon’s robotic warehouses than at its traditional sites.

And for years, the internal data show, injury rates have spiked during the weeks of Prime Day and Cyber Monday, contrary to Amazon’s public claims. Those two weeks had the highest rate of serious injuries for all of 2019.

Amazon declined Reveal’s interview request and did not respond to detailed questions about the accuracy of its public statements. Instead, a company spokesperson provided a general statement about its warehouse safety initiatives.

“Nothing is more important than the health and safety of our teams. So far in 2020, we have committed over $1B in new investments in operations safety measures, ranging from technology investments in safety to masks, gloves, and the enhanced cleaning and sanitization required to protect employees from the spread of COVID-19,” spokesperson Rachael Lighty said in the email.

She said the company has seen improvements through an array of programs inside its warehouses, such as installing guardrails to separate forklifts from pedestrians, increasing safety staffing and offering wellness exercises. “Our investments in safety training and education programs, in technology and new safety infrastructure are working,” Lighty said.

Yet her email didn’t say how the company justifies its claim that these initiatives are working, while injury rates have continued, year after year, to rise.

Warehouses with robots have worse rates

About an hour south on Interstate 5 from Amazon’s Seattle headquarters is DuPont, and a company warehouse called BFI3. Last year, its workers experienced the highest injury rates of any Amazon fulfillment center in the country: 22 serious injuries for every 100 workers — a rate more than five times higher than the most recent industry average.

Cecilia Hoyos, 56, has been at the company for nine years. She lives just a block away from BFI3, and her $17.90 hourly wage supports two children and a 1½-year-old granddaughter.

“I do like working there, it’s just that it’s hurting me and they’re not listening to what my body’s telling me,” Hoyos said.

Since the warehouse opened in 2014, Hoyos has seen the production quotas go higher and higher. Those quotas changed dramatically when the robots arrived at Amazon. Company officials promised they’d save workers such as Hoyos from the fatigue of walking miles a day to find customer orders. All they would have to do is stand in place and grab things.

“We thought it was so cool,” she said. But she soon wished she was back to walking all day. Instead of greeting colleagues as she moved through the facility, she was isolated at a workstation, and standing 10 hours a day doing repetitive motions proved to be much harder on her body, Hoyos said.

The robots were too efficient. They could bring items so quickly that the productivity expectations for workers more than doubled, according to a former senior operations manager who saw the transformation. And they kept climbing.
According to Kathleen Fagan, a physician who inspected Amazon warehouses in her capacity as a medical officer for the federal Occupational Safety and Health Administration (OSHA), studies have shown that production rates have a direct impact on injuries.

“If you’ve got robots that are moving product faster and workers have to then lift or move those products faster, there’ll be increased injuries,” she said.
A former senior Amazon safety manager said that within a year or two of introducing the robots, the unintended consequences had become clear to Amazon’s safety team. “We vastly underestimated the effects it was going to have on our associates,” said the former safety manager, whom we agreed not to name because he left on good terms with the company and, overall, has a positive impression of how Amazon otherwise handled safety.

As far back as December 2015, just over a year after Amazon debuted its fleet of robots, OSHA issued a hazard alert letter against an Amazon robotic warehouse in New Jersey. OSHA called out Amazon for conditions that are a result of the robotics innovation: “The company exposed employees to ergonomic risk factors including stress from repeated bending at the waist and repeated exertions, and standing during entire shifts up to 10 hours, four days a week and sometimes including mandatory overtime shifts.”

The federal agency recommended measures — such as an extra rest break and rotating employees to different jobs throughout the day — that Amazon has yet to implement across its warehouse network. And by the end of 2016, Amazon’s data shows that its robotic warehouses had significantly higher injury rates than its traditional facilities.

Yet in May 2019, Jeff Wilke, one of two CEOs under Bezos, said in a tweet, “What some folks may not know is that the robots make those jobs better and safer.”

Amazon’s data — available at the time in widely circulated internal reports — shows otherwise. For the most common type of Amazon fulfillment center, those that ship small- and medium-sized items, the rate of serious injuries was more than 50% higher at warehouses with robots than ones without from 2016 to 2019.

Amazon did not respond to the finding that its robotic facilities have higher injury rates, instead reiterating its claim that “the use of robotics, automation and technology in our fulfillment centers is enhancing our workplace, making jobs safer and more efficient.”

Austin Wendt left his job as an EMT for a private ambulance company in 2016 to take a higher-paying job running the first aid clinic at warehouse BFI3 in DuPont.

Eventually, he became the only person responsible for safety at the warehouse during his shifts. A safety specialist had quit and wasn’t replaced. His manager, he said, was rarely on-site. Overworked and overwhelmed, Wendt said he was being asked to do things he wasn’t trained to do, such as ergonomic assessments of workstations.

He’d watch workers heave heavy bags of dog food and cat litter all night — tens of thousands of pounds in some cases, he estimated. And the workers had to do it fast. Under constant pressure to hit ever-increasing production rates, they took shortcuts, he said.

Instead of climbing a ladder to grab a heavy item off a top shelf, workers got on tiptoes and reached. Or they’d bend over, instead of squatting, to grab a bag, then twist to put it down quickly. They’d grab a heavy tote off a conveyor belt with one hand while pressing a button on a computer screen with the other. The extra hours, fatigue and stress of peak and Prime Day compounded the problem.

Yet not one of the dozens of safety initiatives described in 2018 and 2019 internal safety reports obtained by Reveal suggests slowing down production quotas to reduce injuries.

“In the end, I don’t think it’s that hard of an issue,” Wendt said; the answer is to “lower the rate.” But, he added, “I don’t think that was ever an option in their head or even thought of as a route to take.”

Wendt left Amazon for a fire department job in early 2019. That year, the warehouse’s injury problem got even worse.

Cecilia Hoyos accounted for two of the injuries on the warehouse logs that year. For one, in July 2019, the heavy lifting and repetition caught up with her. After an entire shift spent unloading a trailer, grabbing heavy boxes and putting them on a conveyor belt, she had a hard time walking to her front door. Trying not to complain, she returned to unloading trailers the next day.

Hoyos ended up with a hip injury that kept her off work for months, according to Amazon’s injury logs. That and other work injuries have left her in constant pain, she said, leaving her feeling like her 80-year-old mother when she climbs stairs.

Hoyos said Amazon should have workers rotate jobs to lessen the repetitive strain. But managers don’t listen, she said. “They say no because they only think about the rates.”

Warehouse leaders would, however, offer pizza parties as a reward for a streak of injury-free shifts, Wendt said — so some workers would push through the pain rather than be the person who cost their co-workers free pizza. Managers were effectively “offering rewards for not reporting injuries,” Wendt said.