Shilpi Gupta left Amazon for the restaurant business, taking with her one of the company’s vaunted leadership principles that exhorts employees to “never say ‘that’s not my job.’”

Matt Williams, a repeat startup founder who spent 11 years inside Amazon, applies the principle of customer obsession at his home-improvement company by asking clients for weekly reviews on a five-star scale.

Ian Clarkson, a longtime Amazonian now leading an online-tutoring marketplace, imported a version of the data-focused culture that is second nature inside Amazon to improve insight into the new business.

They are three of the hundreds of thousands of people steeped in the specific Amazon principles and practices that Jeff Bezos laid out to shape what is now a 25-year-old technology and commerce juggernaut. When they leave to start or join other companies, they often adopt and adapt those principles in their new ventures, spreading the Bezos way, with varying degrees of success.

Amazon at 25 | The Seattle Times invites readers to join an in-depth look at the so-called everything store’s effect on nearly everything, through a series of stories over the next year. Tell us how Amazon impacts your life, and what you want to better understand about the company and its history in Seattle and beyond. Head to Amazon at 25, where you can also read selected stories from our archives, going back to the first coverage of the company in The Seattle Times on Sept. 19, 1995.

Amazon, in attracting thousands of people to the region and shaping their expectations about work, has transformed a broad swath of the local labor force — Amazon employs more than 53,500 people in Washington state now — as Microsoft and Boeing did previously.

Bezos’ first letter to Amazon shareholders in 1997 described “our fundamental management and decision-making approach,” outlining the core values that would be formalized as its leadership principles in 2002. They remain largely consistent today, directing employees to “have backbone; disagree and commit,” for example, and “insist on the highest standards.”

Amazon’s hard-driving company culture has come in for its share of criticism, which some competitors try to leverage as a recruiting tool. But the company remains attractive. Amazon hired close to 100,000 people in the third quarter of this year.

Other Bezos directives — among the most famous, teams should be small enough to be fed with two pizzas — have shaped Amazon’s corporate structure. Former employees say it functions as a collection of startups, each with the resources and support of a mega corporation. In this way, Amazon is a training ground for would-be entrepreneurs.

More than 40 current startup companies in Washington state alone are led by former Amazonians. The company won’t say how many former employees there are.

“It’s hard to fathom, actually, 10 or 20 years from now what the impact on the world will be from Amazon’s invention of itself,” said Williams, who joined Amazon in 1999 when it acquired his online-auction startup.

While most organizations have principles, goals or aphorisms printed on coffee mugs or painted on office walls, few take them as seriously as Amazon.

From the beginning, Bezos, himself the product of Princeton and the private equity firm D.E. Shaw (which described itself as “unapologetically elitist” in recruiting materials), sought to “hire and develop the best,” to put it in the words of another of the principles. He located Amazon here in 1994 in part to tap the pool of top-flight software engineers that had flocked to Microsoft.

Related More on Amazon at 25 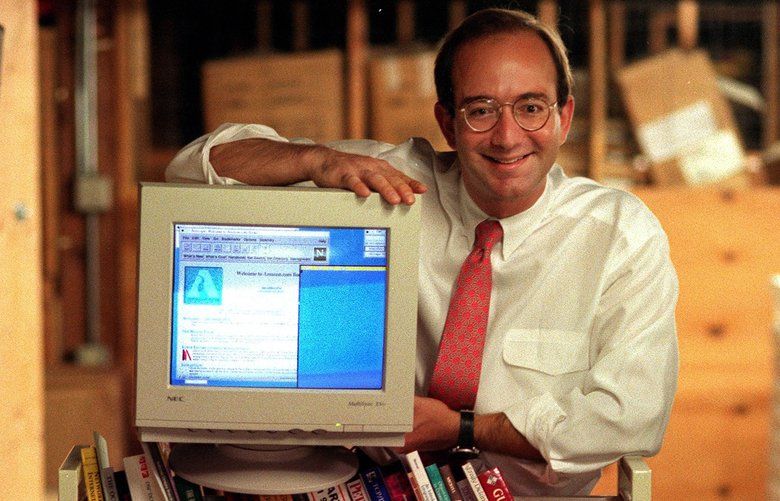 Bezos drove initiatives to reinforce this imperative, including the “bar raiser” concept, Williams said. Employees who elevate the caliber of new hires are awarded a badge that appears next to their name on an internal phone directory tool. It may not seem like much, but in a fast-growing company where people consult the phone directory several times a day, that badge was coveted, he said.

Ten former Amazonians interviewed for this story relayed versions of this: The leadership principles are effective because they are part of daily life, practiced in every part of the company.

“You won’t even realize that it is running in your blood,” said Gupta, who spent eight years at Amazon, working first on payments and later on a global video platform, before delving into food service.

Clarkson left Amazon in 2014 after 14 years for a top leadership role at the repair-services arm of Sears, the everything store of the 20th century. He said his 18 months at Sears revealed that what was ingrained in him at Amazon as the “normal” way to run a business was in fact “unique, special or abnormal — pick the word you want.”

Clarkson is now president and chief operating officer of online-tutoring network Varsity Tutors, whose leadership team, including the company’s chief product and technology executives, has more than 40 years of combined Amazon experience.

“We’ve tried to import lots of stuff from Amazon,” he said.

That can be a challenge, particularly at a smaller, younger company that hasn’t yet built the “scaffolding” to support key attributes of Amazon’s culture, such as its emphasis on data-driven decision-making.

Clarkson tried to implement Amazon-style weekly business review meetings, in which individual teams talk about their current challenges, informed by a deep well of real-time data. But Varsity Tutors, co-headquartered in St. Louis and Seattle, where it houses product, design and engineering staff, wasn’t collecting the data needed for such discussions, so the meetings would bog down.

Clarkson drew on his experience at Amazon circa 2003, recruiting a former co-worker to help build data systems in the new company. The weekly review meetings improved, he said.

“You need to understand where in the journey your company is at,” Clarkson said.

Williams founded Pro.com in 2013, aiming to modernize the business of residential remodeling. Bezos was an early backer, one of 86 investments he’s made in startup companies through his family office, Bezos Expeditions, according to Seattle-based PitchBook Data.

Williams adopted the Amazon principle of “customer obsession” in part through weekly check-ins with clients in the midst of a home-remodel project. Anything less than five stars prompts a follow-up to remedy the problem, he said.

Williams also advises other entrepreneurs, many who try to imbue their companies with some of Amazon’s principles and practices. Sometimes, they overemphasize Amazon’s “more aggressive” principles, he said, such as those describing leaders who “deliver results,” are “right a lot” and have a “bias for action.” These need to be balanced, Williams said, with values like selflessness and empathy.

“Some implementations can actually be quite toxic if you focus so deeply on one without some of the counterbalance,” he said.

Goodale and Lewis,  also wanted the values to counter a tendency in startup companies to lose their sense of urgency as they grow.

Small companies and startups have a high percentage of people who want “to knock down walls to build something new and different,” Lewis said. “As a company gets bigger, the percentage of employees that feel that way every day goes down.”

The values, which inform how Convoy recruits, hires and rewards employees, attempt to “capture the essence of those things — autonomy, ownership, personal responsibility — that make you feel motivated at work and want to stay … and make the company successful,” he said. Convoy now has more than 800 employees.

When it comes to recruiting against Amazon, or the other tech giants here, startups generally can’t afford to pay enough to woo workers away. Many don’t even try, Williams said, relying instead on professional networks and past colleagues. Startups end up recruiting against each other for a smaller pool of people who are choosing to leave big tech, ready to try a smaller company where they feel they can have a larger impact or connect with a specific mission.

Amazon’s role as a magnet for technology professionals ensures a steady supply for startups in the region.

“There’s so many Amazon employees at any given time, even if a fraction of 1% … want to join a startup, it’s a lot of people,” Williams said.

Others try to pitch Amazon employees on a less-taxing place to work. “Don’t fancy the #meatgrinder of a career at @Amazon? Come and join my team @zulily … transforming retail!” tweeted Olly Downs, vice president of data and machine learning at Zulily, last month.

Any perception that Amazon is an unusually demanding place to work did not dissuade job applicants who lined up around the block for a recent Seattle job fair. The company hired 96,700 people in July, August and September, increasing its global work force to more than 750,000.

Despite its enormous size, Amazon’s structure and leadership principles make it an effective crucible for startup founders, former employees said.

At the corporate level, Amazon is composed of many small teams, each limited by the two-pizza rule, part of Bezos’ strategy to stay nimble and grow quickly. The teams have autonomy within their area and are supported by the corporate framework and resources.

Nadia Shouraboura, who spent eight years at Amazon ending in 2012, including on Bezos’ senior leadership team, called it “a conglomerate of tiny companies.” Her husband, who she met at Amazon, still works there.

“For all of us who grew up with Amazon, we actually had tons of startups,” said Shouraboura, who advises retail companies and has founded two herself, most recently Anko, which she described as fast-fashion for the home sold online and from five retail stores around Seattle.

The leadership principle of “ownership” translates directly to startup life. In the 1997 letter, Bezos explained the company’s stock-compensation plans, designed to “attract and retain a motivated employee base, each of whom must think like, and therefore must actually be, an owner.”

That principle has resonated most with Gupta since leaving Amazon.

She recalled washing more dishes in the year she co-owned a food truck, Kukree, than she had in her entire life previously, taking on what might be seen as a menial task because it needed to be done. The challenge of hiring for the food truck inspired her current venture.

Last month, Gupta began a job website called Edizeven, geared specifically to restaurants and food-service workers. It’s pronounced like the number after 86, an industry term for being out of something.

In the process, she’s discovered that Amazon’s principles don’t always apply in other contexts. For example, “have backbone; disagree and commit” is a principle meant to encourage debate in making decisions with the understanding that everyone will fully embrace the choice once it’s made.

In the food industry, Gupta said she’s heard “I told you so” when things go wrong frequently enough to realize “sometimes a principle just doesn’t work as great outside of Amazon.”

We want Seattle Times readers to guide our coverage.

Share your experience as a customer, employee or resident of the city – now cities – where Amazon was launched and has grown.

And tell us what you want to know about the company, its history in Seattle and beyond.

We’ll report on the questions of greatest interest to our readers as we delve into specific topics over the course of the next year.