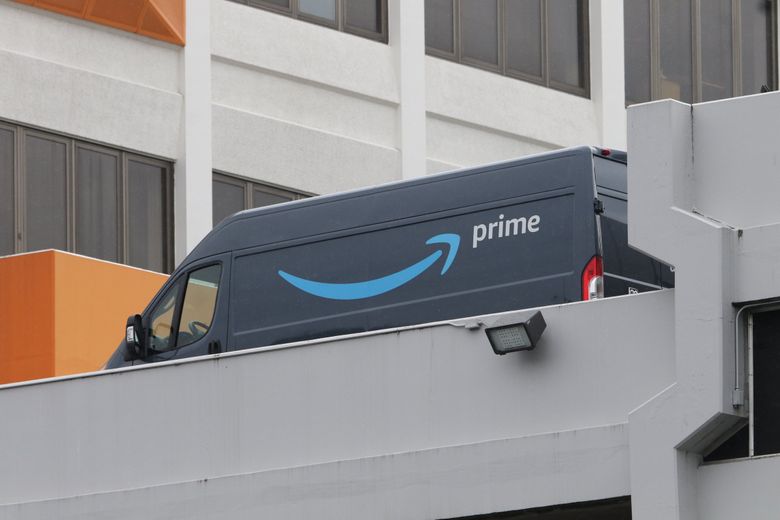 Amazon pledged to make reductions in greenhouse gas emissions as part of its “Shipment Zero” program, but has also procured a new fleet of diesel delivery vans like this one. Amazon shareholders vote Wednesday on whether to report publicly on the company’s climate risks and fossil fuel reduction plans. (Ellen M. Banner / The Seattle Times)

Amazon is preparing to do something it’s never done before: disclose its companywide greenhouse gas emissions.

The commerce giant has an extensive list of renewable energy and sustainability programs underway, but in this fundamental area, it has been a laggard. Other top technology companies and retailers, including Walmart and about a fifth of the Fortune 500, have released emissions data and set specific, science-based reduction plans over the past few years; Amazon has not.

That makes it impossible to evaluate whether the world’s largest e-commerce company is moving at the pace that scientists say is necessary to prevent the worst impacts of climate change — let alone taking the leadership position on the issue thousands of employees want it to.

Amazon, with its diverse portfolio of energy-hungry businesses, faces a challenge in calculating and reducing emissions. Some recent moves, such as its push toward ever-faster delivery speeds for its core Prime customers, raise questions about its ability to do so.

Meanwhile, its influence over consumer behavior and its position at the hub of a vast, global supply chain give Amazon the opportunity for enormous impact beyond its own direct emissions.

Amazon has set ambitious, though still ambiguous, targets for renewable energy use — its long-term goal is to power all of its global infrastructure that way — and more recently for reducing emissions from shipments to customers. It touts the wind and solar energy already powering parts of its vast network of data centers and warehouses, the efficiency of its headquarters buildings and the public transportation its employees take to work.

But other moves, such as the purchase of a large fleet of diesel vans and the shift to one-day delivery, could complicate its plan to reduce emissions from its main business of selling and delivering goods to people’s doors — a model that otherwise has some inherent efficiency and emissions advantages.

Amazon said in February it would reveal its carbon footprint later this year. That announcement came shortly after employee shareholders filed a proposal, to be voted on at the company’s annual meeting Wednesday, that would require the company to report publicly on how it will deal with disruptions caused by climate change and reduce its dependence on fossil fuels. The vote on the nonbinding resolution could give Amazon leaders a view of where stockholders stand on the issue.

They already know where about 1% of Amazon’s global workforce stands. More than 7,160 employees signed an open letter to Jeff Bezos and Amazon’s board of directors this spring in support of the shareholder proposal, an unprecedented public call-out for the company.

“We believe this is a historic opportunity for Amazon to stand with employees and signal to the world that we’re ready to be a climate leader,” the employees wrote.

Amazon is a logistics company as much as it’s a retailer or cloud-computing provider. The new one-day delivery standard it is rolling out this year for its Prime subscribers — matched this month by Walmart — could reverse some of the climate-change benefits that e-commerce offers over traditional physical retail.

About a decade ago, Anne Goodchild, founding director of the University of Washington’s Supply Chain Transportation & Logistics Center, began studying how grocery delivery compares to individual, car-based shopping when it comes to efficiency and fuel use — a proxy for climate impact.

“It’s overwhelmingly better to have basically a bus — a bus for groceries — deliver to you, compared to personal driving,” she said.

The benefits stem from the efficiency of consolidating many people’s purchases into a single delivery route, often served by a box truck or delivery van. As delivery times are shortened, however, carriers must make more frequent trips to fulfill the promise — a scenario familiar to anyone who has sat at home and watched multiple deliveries arrive over the course of a day.

“I think a lot of the benefits we saw there are being eroded by this phase-two model, which looks like a lot of people making these place-to-place trips,” Goodchild said.

At the same time, Amazon is also offering slower shipping options — including one that delivers orders on a single, designated day of the week, helping reduce delivery frequency and associated emissions, as well as reducing packaging. That option, called Amazon Day, expanded nationwide this year, and in some respects it pushes back on the near-instant-gratification commerce Amazon has trained consumers to expect.

The question is whether speedy delivery is compatible with dramatic reductions in greenhouse gas emissions, which Amazon pledged to make as part of its “Shipment Zero” program.

“With improvements in electric vehicles, aviation bio fuels, reusable packaging and renewable energy, for the first time we can now see a path to net zero carbon delivery of shipments to customers,” Dave Clark, Amazon senior vice president of worldwide operations, said in a blog post. The goal is for half of Amazon shipments to be net-zero carbon — indicating Amazon intends to both reduce direct emissions and offset them with actions such as tree planting or carbon capture — by 2030.

While Clark referenced electric vehicles, the company last year said it had ordered 20,000 diesel Mercedes-Benz Sprinter vans to lease to the small delivery businesses it is helping people start to serve its last-mile shipping needs in the U.S. Amazon does have some electric and low-emissions delivery vehicles in its European fleet and says it is constantly testing new technologies.

How broad is the footprint?

In announcing “Shipment Zero,” Clark disclosed for the first time Amazon’s intention to share its “companywide carbon footprint, along with related goals and programs, later this year.” For more than two years, Amazon has been developing “an advanced scientific model to carefully map our carbon footprint,” as Clark put it.

“That’s one great first step that they haven’t done yet,” said Sturcken, of the Environmental Defense Fund, which works with corporations including Walmart, FedEx, UPS and Tyson Foods.

The form that disclosure takes, and how Amazon defines its “companywide footprint,” will be strong indicators of its ambition in taking on the climate crisis.

Observers will be watching to see whether Amazon sets what climate experts refer to as “science-based targets,” a shorthand to describe emissions-reduction plans that keep with the goal of the 2015 Paris Agreement to hold global average temperature increases to 1.5 degrees Celsius by century’s end. Last fall, the Intergovernmental Panel on Climate Change laid out the cuts required to have a chance at that level of warming, projected to avoid the worst impacts of climate change. Emissions must drop 45% from 2010 levels by 2030, and reach net-zero by 2050.

Some companies count not just their own direct emissions from things like vehicles and power purchases, but also those of their suppliers and even their customers, which can be harder to quantify and reduce.

Consumer-brands giant Unilever, for example, counts emissions related to the hot water its customers use while washing up with its products in the shower. These consumer uses represent more than 60% of emissions associated with its broadly construed supply chain, and they complicate Unilever’s goal of halving emissions by 2030.

Walmart counts emissions related to the fertilizer used to grow the corn fed to hogs that become ham and bacon in its stores.

Environmental Defense Fund, which began working with Walmart to analyze its supply chain in 2010, identified the fertilizer as a major source of emissions. As the largest grocer in the U.S., Walmart worked with its supply chain and asked for changes at the farm level, helping farmers more precisely apply fertilizer, which saved them money and reduced emissions, Sturcken said.

“It seems daunting to ask a company to go to the very ends of the supply chain,” she said. “But indeed, sometimes you have to do that to find the biggest impact. … That makes companies like Amazon, who are at a key nexus in the supply chain, a huge lever for positive change.”

Walmart has committed to reducing its direct emissions 18% from 2015 by 2025 — but the company estimates its own direct emissions are only about 5% of its entire supply chain. In 2017, it expanded its supply-chain work with a project to avoid a billion metric tons of emissions — roughly equivalent to the annual emissions from 211 million cars — by 2030.

Clark, in announcing “Shipment Zero,” said Amazon will continue to use its scale and customer feedback “to enable and encourage suppliers up and down our supply chain to reduce their own environmental impact.”

But it remains to be seen whether the company will place climate-related requirements on its suppliers, or how it will treat the growing ranks of third-party sellers, who now generate close to 60% of Amazon’s gross merchandise sales. These sellers, which use Amazon’s marketplace and infrastructure, have their own supply chains.

In an example of Amazon’s limited oversight of third-party sellers, some of them were recently revealed to have sold children’s school supplies and jewelry with illegal levels of lead and cadmium to more than 15,000 Amazon customers.

So far, Amazon investors and financial analysts seem unperturbed by the climate issue, though there are growing signs investors generally recognize the climate crisis.

The shareholder vote on Wednesday could offer the company’s management and directors a better barometer of where its ownership stands.

The two largest proxy-advisory services, ISS and Glass, Lewis & Co., recommended Amazon shareholders approve the proposal. Amazon’s board of directors recommended they reject it, citing the company’s ongoing climate and sustainability programs and the plan later this year to disclose the corporate carbon footprint.

“This is just not something that’s currently super top of mind for investors,” said Anthony Chukumba, managing director at Loop Capital Markets. A half-dozen other analysts contacted for this story said climate change does not factor in their financial models of Amazon.

Chukumba said climate change could become more of an issue if there were significant legislation — something on the scale of a Green New Deal. For now, Chukumba said, he’s impressed with Amazon’s voluntary actions on climate and sustainability. “You can’t run your business to please every single stakeholder,” he said.

Consumer sentiment is another major factor for retailers contemplating their response to the climate crisis.

Sturcken said Amazon could leverage its data and relationship with customers to help them choose more efficient, less-polluting delivery methods. Other companies have found value in advertising their climate bona fides.

Global brewer AB InBev, for example, touted its renewable energy commitments in a Super Bowl commercial showing the Budweiser Clydesdales clomping through a field beneath wind turbines festooned with the brewer’s logo. The company last year set a target to reduce direct and indirect emissions 25% below 2017 levels, per beverage, by 2025.

Bezos in 2017 stood atop a wind turbine in Texas and bashed a bottle of Champagne in a video released to highlight Amazon’s growing renewable energy portfolio.

Despite that, Sturcken said she doesn’t think Amazon’s top executives have previously made climate change a priority. She’s hopeful that’s about to change, particularly as climate disasters continue to pile up and more of the company’s customers and employees see the impacts.