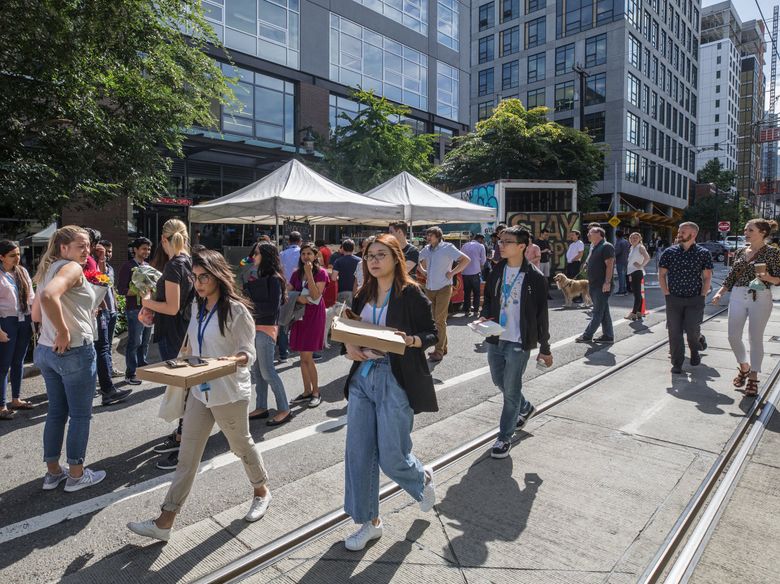 You can find them on South Lake Union sidewalks, in buildings filling the growing skyline of downtown Bellevue and in vast warehouses in Kent and Sumner.

After a decade of torrid growth, Amazon now has more than 53,500 employees in its original headquarters region. It paid its local employees $9 billion last year.

On Monday, the commerce and technology giant is rolling out a new hiring push to fill some 10,000 openings in the Seattle area by 2020 — the majority for new positions rather than to backfill for attrition — as part of a larger national hiring initiative that includes job fairs next week here and in five other cities.

The company, in its 25th year, has edged above Microsoft’s local work force and is second only to Boeing among area private employers. Amazon’s rise has further diversified the region’s economy and contributed to an unparalleled economic boom, bringing prosperity but also challenges as housing and transportation infrastructure lag population and job growth.

“The last half-dozen years in particular, we’ve seen that diversification accelerate due to Amazon’s growth and their presence as a pillar equal to Microsoft and Boeing from the private sector,” said Josh Brown, executive director of the Puget Sound Regional Council.

Combined with another major employment pillar — the U.S. military employs 89,700 people at Joint Base Lewis-McChord and naval bases in Everett and Bremerton (which has the most workers in two decades) — the result has been an “amazing, historic period of job growth,” Brown said.

“They’ve all been doing well at the same time,” he said, adding a caveat about Boeing’s current struggles with the 737 MAX, which so far have not resulted in layoffs. “That is unusual for our region.”

A new economic development report Amazon commissioned estimates the company’s direct investment in buildings and salaries over the last nine years added $111.2 billion to regional gross domestic product since 2010 and helped support some 14.5% of jobs in the Seattle-Tacoma-Bellevue area.

The company’s high-profile search for a second headquarters, overlapping its spat with Seattle City Hall over a business tax last year, raised questions about its future in its home region. (The economic impact study, performed by Keystone Strategy using Amazon-provided data, did not include any analysis of local taxes paid by the company or its employees. Last year, a company source said it paid about $250 million in 2017 Washington state and local taxes, including sales taxes.)

Amazon’s regional employment growth was slower in 2018 than at any time in the last decade and the majority of its openings are outside of the region.

Amazon aims to hire for another 20,000 jobs nationwide — meaning outside the Seattle area — starting with job fairs in Dallas, Boston and Chicago, as well as Nashville, Tennessee, where it is establishing a major logistics center, and Arlington, Virginia, the site of its second headquarters.

The hiring push comes amid one of the tightest job markets in 50 years, and the company says the recruiting is separate from its typical seasonal hiring of thousands of temporary employees to staff its warehouses and transportation networks for the holidays. Globally, Amazon had 647,500 full- and part-time employees at the end of 2018.

But the company continues to invest and build here. By the end of 2020, Amazon will have room for about 55,000 people working in some 50 buildings that make up its dense Seattle campus in South Lake Union and the Denny Regrade. Much of its future growth in the region appears slated for Bellevue, where Amazon is leasing office space and erecting what will be the tallest building in the city. Amazon’s current plans suggest room for 11,000 people in Bellevue by 2024.

Amazon currently lists some 4,500 software development openings in the greater Seattle area, 1,800 program or product management jobs, and several hundred more in corporate support categories such as finance, accounting, human resources, and marketing and PR. At the local job fair, to be held Sept. 17 at the South Lake Union Discovery Center, recruiters will be hiring for roles across the company.

Amazon declined to make an executive available to discuss its local growth plans.

Amazon’s local employment now surpasses Microsoft, which had 51,854 employees in the Puget Sound region as of June 30. Boeing had 69,830 employees across Washington state at the beginning of the year.

Amazon’s study estimates the broader economic impact of its spending in the region by using multipliers from a Bureau of Economic Analysis model. For example, in 2018, Amazon paid its local employees more than $9 billion in total compensation — or $179,000, on average, though pay ranges widely from hourly warehouse workers in Kent to programmers and corporate executives in Seattle. The study estimates that another $6.9 billion was earned by employees at other companies that provide goods and services to Amazon or otherwise benefit from its local business activity and the spending of its employees.

Amazon at 25 | The Seattle Times invites readers to join an in-depth look at the so-called everything store’s effect on nearly everything, through a series of stories over the next year. Tell us how Amazon impacts your life, and what you want to better understand about the company and its history in Seattle and beyond. Head to Amazon at 25, where you can also read selected stories from our archives, going back to the first coverage of the company in The Seattle Times on Sept. 19, 1995.

Rising incomes and newcomers to the revved-up Puget Sound economy have made it difficult for people to get around and afford housing, but Brown, at the Regional Council, sees progress on both fronts.

He said the region is investing more money, per capita, on transportation infrastructure than anywhere else in the country. And across King, Snohomish, Pierce and Kitsap counties, housing construction has accelerated. In the 12 months ended last April, the region added 27,500 new housing units — surpassing the peak of 25,100 units built during the housing bubble that preceded the Great Recession.