Amazon employees and contractors who worked in the company’s operations business throughout June will receive a one-time bonus — $500 for full-time hourly employees — as thanks for their work during the pandemic, the company announced Monday.

The bonus for each individual ranges from $150 for contract delivery drivers who worked at least 10 hours in June to $3,000 for owners of small delivery companies set up to drive for Amazon. Full-time employees working in the company’s warehouses and Whole Foods Market stores will get a $500 bonus. Divided across a 40-hour-per-week schedule for the month of June, the $500 bonus is slightly less than $3 an hour.

In recognition of their role helping the company respond to a surge in demand as the coronavirus upended normal life, Amazon paid its hourly employees $2 an hour extra during part of March, April and May, and increased overtime pay. It canceled the pay boost June 1, despite the continued spread of COVID-19, the disease caused by the new coronavirus. 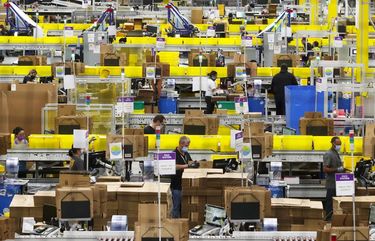 Inside Amazon’s Kent fulfillment center, a proving ground for the company’s coronavirus response

Amazon’s companywide U.S. minimum wage is $15 an hour. Most employees also receive health insurance and have access to other benefits, including job training programs.

“Our front-line operations teams have been on an incredible journey over the last few months, and we want to show our appreciation with a special one-time Thank You bonus totaling over $500 million,” Dave Clark, Amazon senior vice president in charge of worldwide operations, said in a message to employees announcing the bonus.

Amazon has estimated coronavirus-related costs, including pay increases, safety measures and testing programs, of $4 billion through the first half of the year. The spokesperson did not respond to questions about whether the $500 million for bonuses is included in that total.

Amazon’s stock price, which has hit record levels this year, was down less than half a percent Monday, closing at $2,680.38, while broader indexes gained between 1% and 3%.

After hiring 175,000 people for temporary positions this spring — most of whom were offered regular full-time employment — Amazon’s global workforce reached 935,000. About 650,000 people work for the company in the United States.

In Europe, where some Amazon workers are unionized, employees have pushed back on pay and working conditions. Labor union Verdi said workers at six sites in Germany were planning a strike Monday lasting at least 48 hours to protest safety issues as employees continue to test positive for COVID-19.

A small number of U.S. Amazon employees held walkouts earlier this year and decried the company’s handling of the pandemic.

Walmart, the only private company with more U.S. employees than Amazon, last week paid out its third cash bonus — including an early payout of first-quarter bonuses — for employees working through the pandemic in the last three months. The latest bonus was $300 for full-time hourly employees and $150 for those working part-time or temporary jobs.

Walmart in January increased its minimum wage in about 500 stores from $11 to $12 an hour. It also added a temporary $2-an-hour pay boost for workers in its warehouses from late March through late May.