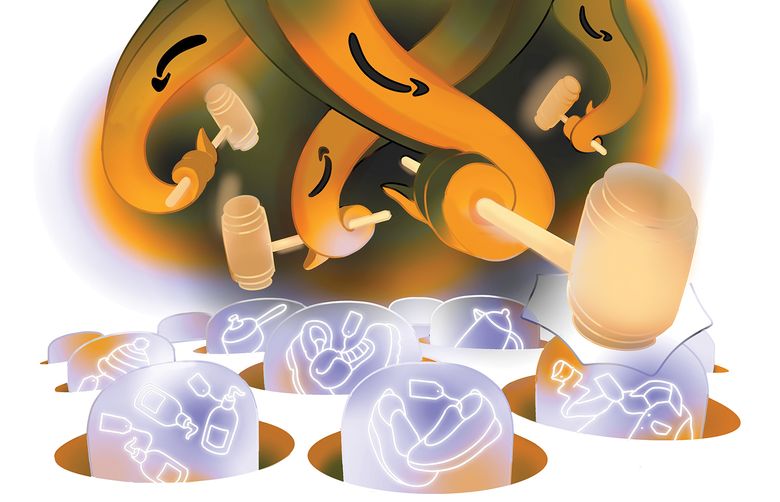 As antitrust scrutiny of Amazon mounts, the retail behemoth has been pressuring some of its top sellers to drop prices to ensure shoppers cannot find a lower price anywhere else — online or in a brick-and-mortar store.

Since early this year, Amazon has been telling some of the largest third-party sellers on its Marketplace platform they can’t list new products until they match prices offered by Amazon’s retail competitors, like Walmart, Target and Costco, according to copies of emails between seven sellers and Amazon seen by The Seattle Times.

Amazon’s threats may add fuel to arguments that the company’s control over its Marketplace platform violates federal antitrust laws. The tactic could also raise prices for consumers, according to interviews with employees and executives of some of the largest sellers on Amazon’s platform.

The CEO of one seller whose ability to create new listings was suspended earlier this year said he believes Amazon’s pricing policy is anticompetitive, but, fearing retaliation, has not communicated those concerns to Amazon.

“Amazon sellers are more scared of Amazon than the U.S. government,” he said.

In email messages to sellers, Amazon has said that “to protect the customer experience” the seller is “prevented from listing new products.”

The emails go on to say the seller “has failed to consistently maintain our standards for customer experience across … well-known national brands” by not ensuring its prices were “competitive compared to what could be found in other retailers” 95% of the time.

“Uncompetitive prices mean that customers considering your products could have easily found your products cheaper at another major retailer, and may have chosen to shop elsewhere,” the Amazon representatives went on in form emails sent to sellers. “This creates a negative experience for our customers.”

When calculating competitive pricing, Amazon examines prices for products on other online retailers as well as in physical stores, he said. The major sellers targeted by the Amazon policy represent 1% of the brands sold on Amazon, Graham said, “but are important to our customers because they are so widely available in other retailers, such as Walmart, Target, and Costco.”

Share your questions, tips and insights about Amazon.com by email at business@seattletimes.com and via the encrypted Signal messaging app. To learn more about how to contact reporters confidentially, visit https://st.news/newstips.

“Sellers have full control over the prices they set on Amazon,” Graham said. But, he continued, if prices for nationally recognized brands are “consistently” higher on Amazon than at other major retailers, “we see that as trying to gouge Amazon customers and we don’t think that’s acceptable.”

But sellers, antitrust attorneys and Amazon’s hometown congresswoman say the policy demonstrates how Amazon is increasingly exerting control over the activities of the businesses on its Marketplace.

The Seattle Times interviewed executives and current and former employees at five major Amazon sellers who have experienced pressure from Amazon to lower their pricing, most of whom asked to remain unnamed so as not to damage their company’s relationship with Amazon.

These third-party sellers are well-bankrolled businesses, some with hundreds of millions of dollars in revenue. One recently went public. Many have authorized reselling relationships with nationally known brands like L’Oreal, Unilever and Johnson & Johnson that can prohibit them from selling products for less than a contractually mandated price.

When Amazon began turning off sellers’ ability to create new listings, they panicked.

“My initial reaction was, this is completely unfair, unfounded,” said the CEO of a second Amazon seller, whose ability to create new listings was frozen this spring.

E-commerce firm Packable, by some estimates the largest seller on Amazon.com, was unable to create new listings for some brands for nearly a month this summer, according to a current employee who asked not to be named because they were not authorized to discuss the issue. On Amazon, Packable sells health and beauty products, household goods and medical supplies like CeraVe lotions, Nature’s Bounty vitamins and Sensodyne toothpaste. It also sells brands like Lysol and Clearasil, manufactured by British conglomerate Reckitt Benckiser, a Packable investor.

The “weird situation” contributed to a projected year-over-year drop in sales of more than 50% for one brand Packable sells, they said.

“We have warehouses full of product that we can’t get to the market because of this policy,” said the CEO of a third large Amazon seller. Citing constraints in the global supply chain, he added, “it was hard enough to actually order it, get it to arrive in time. Now we have to see if we can actually get it listed.”

The price disparities Amazon cites are sometimes small — a few cents or a couple of percentage points. Other times, Amazon asks sellers to drop their prices significantly. One seller was told the competitive price for a product was 20% lower than their price, according to correspondence seen by The Seattle Times. Matching the price would have caused the seller to lose money on each sale.

Sellers who change their pricing to be competitive 95% of the time are allowed to begin listing new products again, the emails said.

Amazon presents its platform as something close to a free market, where sellers “are responsible for setting their own prices” but incentivized to set them as low as possible. The company touts the low prices available on its platform.

“One of the main reasons our customers shop at Amazon is our reputation for low prices,” Graham said in the statement. “That reputation has been developed over many years of consistently featuring low prices across all of the selection in our store.”

But as the cost of selling on Amazon has climbed, some Amazon sellers have said it’s growing difficult to offer the lowest prices on the internet.

Between listing fees, fulfillment costs and advertising expenses, Amazon’s cut of independent merchants’ sales increased more than 50% between 2015 and 2020, and now amounts to an average of 30% of each sale, according to a study last year by the nonprofit Institute for Local Self-Reliance.

Those costs are baked into the price of merchandise on Amazon, leading some regulators and lawmakers to question whether Amazon’s power in the marketplace is distorting prices around the web.

Speaking by phone, Rep. Pramila Jayapal, D-Seattle, described Amazon’s new tactic as another way that the company uses its “monopolistic power” to “control a marketplace completely, so consumers don’t have choices.” Jayapal, vice chair of the House committee dealing with antitrust issues, has introduced legislation that could compel Amazon to spin off its retail marketplace.

“Companies have to have the autonomy to set their own prices in a pro-competition manner,” Jayapal said. Amazon’s pricing policy “is not how a competitive, free and healthy marketplace works, that one company can dictate the behavior of other companies on its platform.”

Amazon’s strategy of suspending some sellers’ ability to create new listings unless they match prices elsewhere represents a ramp-up of what the company already does to encourage sellers to offer low prices, sellers and marketplace experts say.

For a seller, the consequences of losing access to Amazon’s massive marketplace are likely high. Amazon recently surpassed Walmart to become the second-largest retailer in the world by consumer spend.

Amazon’s new pricing policy “seems more aggressive than what I had thought Amazon would do,” said Juozas Kaziukėnas, the founder and CEO of e-commerce research firm Marketplace Pulse, which provides data and analytics to Amazon sellers.

“It’s no longer up to the sellers to decide how they want to be selling these items,” Kaziukėnas said.

Sellers do not have a uniform response to Amazon’s latest pressure on prices.

Some have lowered prices on their products, including one who said he pursued a “whack-a-mole” fix, briefly lowering prices on the products Amazon has flagged as too expensive. For months, he said, it didn’t seem to make any difference, and he ultimately stopped trying.

Some sellers, though, are urging the brands they partner with to get lower-priced listings elsewhere adjusted or removed, according to employees and executives of those companies.

That could drive up prices around the internet, said Steven Salop, a Georgetown Law School professor and former federal antitrust regulator.

“A superficial analysis might suggest that this policy leads to the prices on Amazon.com falling,” Salop said. But in light of Amazon’s dominant position in the market, he said, “a more rigorous economic analysis suggests that it is more likely that it will lead to higher prices being charged by rival retailers.”

Amazon “strongly disagree[s] with this notion,” Graham, the company spokesperson, said in the statement. The company “focuses on ensuring that customers find low prices in our store on leading brands sold by other major retailers, both offline and online. … We are simply trying to ensure Amazon’s customers are charged competitively low prices for the same product offered at other major retailers.”

Manufacturers, especially of high-profile or luxury goods, have long sought to prevent their products from hitting the market at low prices, which they believe can undercut the value of their brand.

Packable, for instance, has contractual arrangements with brand owners, common in the retail industry, mandating Packable not sell products below a certain price point, a former Packable employee said. The company works with brand owners to pressure other merchants to stop selling branded merchandise at lower price points than Packable is authorized to offer, said the former employee.

Packable CEO Andrew Vagenas in a September interview also said that it is Packable’s policy to “work with brands to clean up their distribution,” in part to prevent inventory from hitting the market at lower prices than Packable is able to offer.

Packable, which announced in September an agreement to go public through a merger with Highland Transcend at a valuation of $1.5 billion, relies on Amazon for 80% of its product sales revenue. Company representatives told investors in September that it “retains control over listing price” on platforms like Amazon.

The CEOs of two other large Amazon sellers that have been penalized for price-competition issues say they also focus on persuading brands to restrict the distribution of their merchandise to lessen the chances another seller will undercut them online.

“If a brand sells in a distribution network, and some of those products end up on another channel for a lower price, that’s what Amazon calls a bad customer experience,” one of the CEOs said. Amazon doesn’t “want to lose out to Walmart because XYZ [product] is priced for less.”

Possible effects on pricing aside, some sellers believe the new policy is evidence that Amazon’s control of its Marketplace platform has grown too strident, and too arbitrary.

“You’re trying to play the game the way the rules are set, but the rules keep changing,” the CEO of one seller said. “It’s business, but it’s super challenging to work within this environment.”

Correction: This story has been updated. Packable announced in September an agreement to go public through a merger with Highland Transcend at a valuation of $1.5 billion, but had not yet done so.