Like thousands of other seafarers, Karika Neethling wanted to get home as the coronavirus pandemic convulsed the cruise industry in March. Her anxiety grew more desperate when she learned she was pregnant.

But for nearly three months, the 27-year-old South African was caught in a web of border restrictions and corporate bureaucracy, shuttled on ships between ports in the Bahamas and Italy as her employer, MSC Cruises, worked to get its crews home.

“I don’t think we were ever priorities,” said Neethling, who worked as a shop employee aboard the luxury liner the MSC Preziosa. “I was depressed and in despair thinking I might have this baby on the ship.”

Neethling isn’t alone. While she’s finally home in Johannesburg, more than 200,000 more seafarers remain trapped on ships around the world, from cargo vessels and oil tankers to luxury cruise liners. Restrictions on ships docking to halt the spread of COVID-19, border shutdowns and a lack of flights are the biggest barriers to relieving exhausted crew. But shipping lines and cruise companies are also coming under increasing pressure to do more. 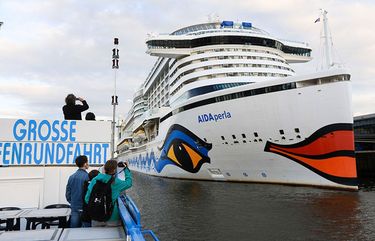 The world’s cruise ships can’t sail. Now, what to do with them?
Advertising

Nations including the U.S., Singapore, Greece and the United Arab Emirates said they would ease coronavirus-related restrictions for seafarers and boost commercial flights to help facilitate crew swaps. The pact comes after months of pressure on governments, ports and shippers to find ways to get workers off vessels after a rash of suicides and an uptick in expired contracts.

Seafarers will now get international recognition as “key workers” to enable freer movement and quicker repatriation, following a virtual International Maritime Summit hosted by the U.K. Thursday. Some crews have spent more than a year at sea, exceeding limits under maritime agreements, as border restrictions to halt the spread of COVID-19 and canceled flights limited travel.

“It is time to act for seafarers,” said Kitack Lim, secretary-general of the International Maritime Organization. “Safe ship operations and crew well-being should not be compromised. The humanitarian crisis seafarers face has implications for all of us, for the world economy and for the safety of life at sea and the environment.”

While cruise companies have been able to get most seafarers home by pooling thousands of workers and chartering flights, or in some cases taking them home on luxury liners empty of passengers, the majority of crews on merchant vessels have been stranded.

Because of travel restrictions, another 200,000 seafarers haven’t been able to get back onto ships to relieve crew who have finished their contracts.

“What we need is for every country around the world to acknowledge seafarers and allow them to get home,” said Chirag Bahri, director of regions at International Seafarers’ Welfare and Assistance Network. “They’re not robots. They need to get home.”

While a growing number of ports are now allowing crew changes, management companies say the restrictions have made it difficult to relieve substantial numbers. Ship managing firm Wallem Group says the company has only been able to execute about 20% of their usual crew changes, according to CEO Frank Coles. About 40% of their 4,000 seafarers on vessels have completed their contracts and 10% have been at sea for more than a year.

MSC said it’s been working with governments and ports to get workers home as quickly as possible, prioritizing pregnant seafarers. The company said in a statement that a “small number” of pregnant crew members across its fleet “have had to stay on board awaiting repatriation despite our best efforts to secure safe passage home for them.”

How much responsibility companies bear for workers trapped at sea is a growing point of contention. That leaves one of the world’s most vulnerable working populations, some who have been stuck on board for more than a year, at increased risk and could have a knock-on effect that reverberates through the shipping industry and global economy.

“Pressure to change crew has increased dramatically,” said Carl Schou, chief executive officer of Wilhelmsen Ship Management, which oversees about 5,000 seafarers on vessels and manages a worker pool twice as big. “If nothing happens to get crew off ships, shipping would stop.”

Stranded crews are becoming increasingly desperate. The Philippines’ Maritime Industry Authority has received “alarming reports of seafarers killing themselves aboard ships due to loneliness and depression,” Administrator Robert Empedrad said in a speech last month.

Indian crew stuck on Global Cruise Lines’s luxury liner MV Astoria staged a hunger strike in June, demanding to return home. That vessel, along with four others from the same company, were detained by the U.K.’s Maritime and Coastguard Agency for expired contracts, late payments of wages and crew who have been on board for more than 12 months. The company and the International Transport Workers’ Federation have come to an agreement to repatriate most of the crew on those ships this month.

While the international seafarers’ union says crews are within their rights to halt work if their contracts have expired, many seafarers worry employers could retaliate if they speak up or refuse to continue working.

S.K. David, an engineer aboard a container ship that transports freight between Asia and South America, said he extended his six-month contract because he felt if he didn’t, his chances for future employment would be limited. He asked that his employer not be identified out of fear of reprisal.

“It’s sad we are treated this way, unrecognized, forgotten as second-class citizens,” said David, who has yet to hold his son born in February.

Capt. Nikolaos Steiakakis, who disembarked in Houston in June after spending three months longer than expected at sea and missing the birth of his daughter, acknowledges that some seafarers are afraid to refuse an extension of their contract. “However, no company is forcing anyone to stay on board if they can do a crew change,” he said.

ITF, the seafarers’ union, has seen a spike in the number of requests for help from crew who want to stop working while on their ships since the union put out a statement last month saying crew who have finished their contracts can exercise that right, potentially idling ships.

“Some seafarers are being forced or intimidated into signing contract extensions,” said Steve Trowsdale who oversees inspections of ships for the union. “The majority of them just want to go home.”

David, the containership engineer, and seafarer advocates contend some shipping lines aren’t prioritizing the repatriation of seafarers by diverting ships for crew changes and are reluctant to shell out larger sums for expensive charter flights. For smaller shippers, it may not be financially feasible to charter flights for just a handful of crew from one country.

Still, some shipping lines are doing just that — at great expense. V Group, one of the biggest managers with a crew of 44,000 globally, said it has seen shipowners pay as much as $800,000 to charter planes to bring workers home.

Diverting vessels to ports like Singapore or Hong Kong, which are helping facilitate crew swaps, is also a pricey option that can increase costs by tens of thousands of dollar a day. But at least six vessels have stopped in Manila since last month solely to swap crew, with another two scheduled this July, according to local manning agency Baliwag Navigation.

A.P. Moller-Maersk, which controls about a fifth of the global fleet used to transport goods by sea, said in a June 20 statement it’s considering diverting vessels to change crews when opportunities arise but “it is not a sustainable solution.” The company said in May it was offering benefits like increased internet connectivity and mental support programs for crews.

Under a new contract clause proposed by BIMCO, an association which counts around 60% of the world’s merchant fleet as its members, ships would have greater latitude to divert to relieve crews.

Change isn’t coming fast enough, said cruise ship shop worker Neethling, who battled anxiety as she waited for MSC to get her off the ship. Though the company said it offered extensive care and prenatal vitamins to pregnant crew members, Neethling said she didn’t receive any of that.

After her sister threatened legal action, and Neethling sought help from the international seafarers union, she was finally taken off the ship and flown home via Frankfurt on June 12.

Now out of quarantine, she saw a doctor at her first prenatal checkup this week. She’s expecting a boy in December. “No pregnant woman should be under the stress I was facing,” she said. “What’s happening to workers stuck at sea is inhumane.”

K. Oanh Ha
Krystal Chia
Claire Jiao
The Seattle Times does not append comment threads to stories from wire services such as the Associated Press, The New York Times, The Washington Post or Bloomberg News. Rather, we focus on discussions related to local stories by our own staff. You can read more about our community policies here.
Advertising